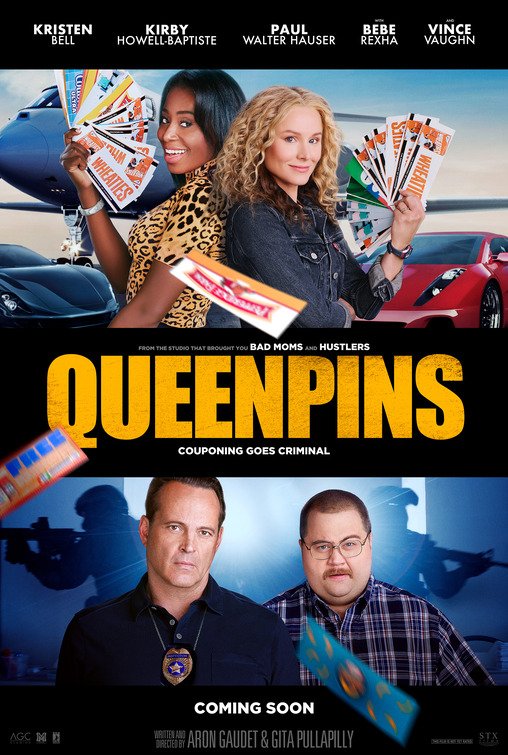 QUEENPINS is a crime comedy about two women in suburban Phoenix who start a multimillion dollar coupon scam. They get a married couple at a coupon printing plant in Mexico to send them the overruns of free coupons that usually get destroyed. They then sell free coupons for a discount online. Soon, the women are making money hand over fist. However, the regional manager of a small grocery store chain uncovers the fraud. Eventually, he’s teamed up with a postal investigator to find the women and bring them to justice.

QUEENPINS takes a comical approach to this story, and it’s hilarious. Many scenes contain really funny moments. However, the movie is filled with many “f” words and other foul language. Also, the ending shows that crime pays, and rules are meant to be broken. This final message in QUEENPINS is mitigated a bit, though, by the positive relationship between the postal investigator and the grocery chain manager. The postal cop teaches him compassionate lessons about people and being a good law enforcement officer. Viewers should side more with these characters in QUEENPINS.

(RoRo, B, PP, LLL, V, A, D, MM):
Dominant Worldview and Other Worldview Content/Elements:
Strong Romantic worldview with some moral elements in a humorous story about breaking rules and Law versus Grace, which is dealt with in a manner that’s not overtly religious (the main male character is depicted as too legalistic, and he learns to give people a little grace in his position of power, so he does become a better man, mostly because his compassionate investigating partner gives him a little grace when he makes mistakes or gets too angry), but two women who break the rules don’t seem to learn a lesson at the end, and the movie has a positive depiction of the two main characters representing law enforcement and the more experienced one, who’s depicted as a compassionate gives a lesson to the other one about the way the justice system works concerning the separation of powers between law enforcement and the courts
Foul Language:
89 obscenities (including many “f” words), three Jesus profanities, two GD profanities, nine light profanities, man on toilet talks on phone, and crude discussion about a man on a stakeout who refuses to leave car even though he has to go to the restroom
Violence:
Two women launder some ill-gotten money by buying a trunk filled with guns and selling it to a menacing militia group in a tense scene, and a SWAT team with federal and local police officers burst into two houses to arrest three women at gunpoint
Sex:
No sex, but married woman goes to a fertility clinic to be artificially inseminated, and she decides not to use her husband’s stored DNA but another man’s
Nudity:
No nudity
Alcohol Use:
Brief alcohol use
Smoking and/or Drug Use and Abuse:
Brief smoking but no drugs; and,
Miscellaneous Immorality:
Two women commit coupon fraud and try to evade the law, one main female character is estranged from her husband though they’re still living together, and the mother of another main female character is comically critical of her daughter.

QUEENPINS is a crime comedy about two women in suburban Phoenix who start a multimillion dollar coupon scam, and the two men, a postal investigator and a grocery store coupon expert, who try to find them and bring them to justice. QUEENPINS is hilarious and has a great cast and some morally uplifting moments, especially between the cop and the overly passionate coupon expert, but the movie is marred by abundant gratuitous foul language and the fact that the crooks get light sentences and don’t learn their lesson.

Inspired by a true story, the movie opens on a white married blonde woman named Connie, who narrates her part of the story. Connie and her husband, Rick, an IRS auditor, are heavily in debt after trying to get Connie pregnant three times using a fertility clinic. Their marriage is on the rocks, however, because Connie finally got pregnant, but the baby died. As a result, Rick has thrown himself into his work, which involves traveling three weeks out of every four, and Connie has become a grocery store coupon fanatic to save money.

Connie is close friends with her next door neighbor, a young black woman named Jo Jo, who’s been forced to live with her mother after an identity thief wiped out her bank account and ruined her credit. Jo Jo runs a small hair and cosmetic company for black women, but it’s been hard getting her business off the ground because of her bad credit, which isn’t her fault.

Meanwhile, Ken, a chubby, passionate regional manager for a Southwest grocery store chain, keeps track of the company’s coupon system. A coupon expert, he’s a stickler for the rules, however. So, when an elderly lady’s coupon for her hemorrhoid medication turns out to be counterfeit, he tells the clerk to deny her a courtesy coupon. Needless to say, the woman’s not at all happy.

Back in Phoenix, Connie is increasingly frustrated by her economic struggles. When she buys a box of stale cereal, she complains to the company and gets a coupon for free cereal. So, she starts making a lot of false complaints about other products to get coupons for free stuff. Connie then learns about a coupon printing company that moved its operations from the United States to Chihuahua, Mexico to save money. She has an idea how to make a lot more money, so she and Jo Jo travel down to Mexico to bribe one of the workers. Connie’s instincts focus on two of the workers, Alejandro, and his wife, Rosa. She learns that Rosa works in the department checking the returned coupons, and Alejandro helps print the coupons. He informs Connie and Jo Jo that he’s tasked with destroying all the excess coupons printed every day. He agrees to send them the extra coupons instead, especially the coupons for totally free stuff.

Connie and Jo Jo start selling the free coupons for a discount online and soon are making tons of money. However, Ken starts noticing that his grocery chain is getting a lot of free coupons, and it’s costing lots of money for the big food and household product companies that supply his small chain and other, bigger supermarkets. He goes to the FBI office in Denver, where he lives, but the guy there thinks Ken is a nut and buries the file on Ken’s case in a minor FBI department in Washington. The guy working there, however, eventually realizes the importance of the case, but the case gets transferred to an investigator working for the U.S. Postal Service. When Simon, the postal investigator approaches Ken, Ken is very skeptical. He doesn’t realize how powerful and important postal investigators can be. Also, Simon has to tamp down Ken’s passion and anger, which tends to get out of control in funny ways. Making their job harder is the fact that Connie and Jo Jo have enlisted the help of a dark web guru who’s helped them find ways to hide their identities and launder their money. Connie and Jo Jo are such novices, though, that they find ways to foul up the woman’s instructions.

Will Simon continue to let Ken work on the case with him? How will they find and catch Connie and Jo Jo?

QUEENPINS takes a comical approach to this coupon caper, and it’s hilarious. Many scenes contain really funny moments. For example, Jo Jo’s mother is comically critical of her daughter in every scene, and, when she learns that Jo Jo is committing coupon fraud, she says, “I knew you were up to no good!” Also, the postal investigator is always trying to calm Ken down when they’re interviewing people. QUEENPINS also has a great cast. All the actors are entertaining to watch. Kristen Bell and Kirby Howell-Baptiste are funny together as Connie and Jo Jo, as are Paul Walter Hauser and Vince Vaughn as Ken and Simon.

However, QUEENPINS is filled with many “f” words and other foul language. Also, Ken is upset when Connie and Jo Jo get a clever lawyer and only receive light sentences (Connie takes the main rap because she admits she was the primary instigator behind the coupon fraud, but she still gets a light sentence). Simon, the postal investigator, reminds Ken, though, that they’ve completed their law enforcement jobs perfectly, and it’s up to the courts to decide the criminal’s fate.

Ultimately, therefore, the movie is a comical treatment about breaking rules and Law versus Grace. Ken is too legalistic, and he eventually learns to give people a little grace in his position of power at the grocery chain. Simon has something to do with that change, because he compassionately gives Ken some grace when he gets makes mistakes or gets overly aggressive and angry during their investigation together. However, Simon’s lessons make Ken a better enforcement officer. Their relationship mitigates the plot about the two female coupon fraudsters, who discover that crime does indeed pay if you’re clever and lucky enough. MOVIEGUIDE®, of course, sides more with these characters. Still, the final message of QUEENPINS is that crime pays, and rules are meant to be broken.