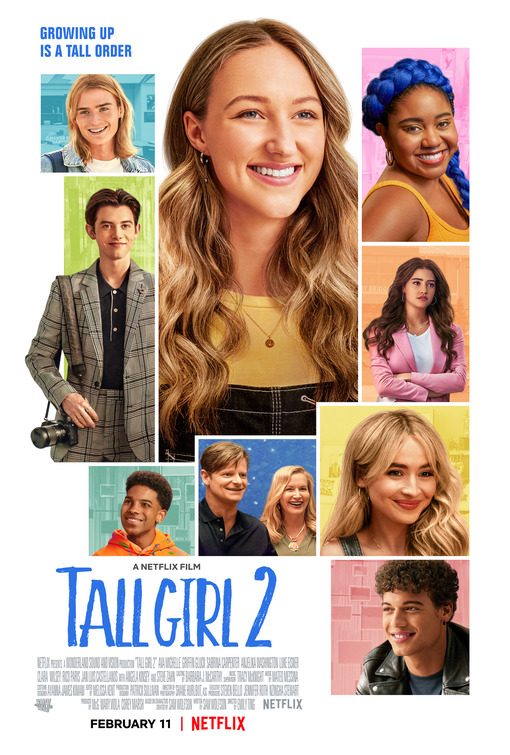 In TALL GIRL 2, a Netflix comedy, Jodi Kreyman is the “tall girl” who previously stood up to high school bullies who tried to make her feel badly about herself for being so tall. Now, Jodi’s gained some popularity in school. She decides to try out for the school play. She’s also coming up on the three-month anniversary with her boyfriend, Jack. However, when she lands the lead in the play, she’s burdened with a small voice in her mind that casts doubt on her abilities. This leads to problems in her relationship. Will Jodi be able to drown out the bully living in her own head?

TALL GIRL 2 contains a brief recap of the previous movie. So, viewers can easily keep track without seeing the first movie. TALL GIRL 2 is a cute, funny movie, with high production values, wholesome content and an endearing, relatable cast. TALL GIRL 2 primarily follows a Romantic worldview about following your dreams, but contains some moral, redemptive elements about doing the right thing. TALL GIRL 2 is a sweet, encouraging family movie on Netflix.

(RoRo, B, C, M):
Dominant Worldview and Other Worldview Content/Elements:
Strong Romantic worldview with some moral, redemptive elements where pursuing personal dreams is the top priority, and the title character must be able to block out the negative thoughts and self-doubt afflicting herself, just like everyone else, in order to pursue her dream of being an on-stage performer, and the moral, redemptive elements include the school bullies changing their ways and becoming kind-hearted people who look out for the needs of others above their own
Foul Language:
No foul language
Violence:
No violence
Sex:
No sexual content
Nudity:
No nudity
Alcohol Use:
No alcohol use
Smoking and/or Drug Use and Abuse:
No smoking or drugs; and,
Miscellaneous Immorality:
Some bullying, but rebuked and positively transformed.

TALL GIRL 2 is the follow up movie to the original Netflix movie, which features Ava Michelle as Jodi Kreyman, a girl who towers over everyone in her high school and is therefore bullied and treated as some kind of freak. With a short recap in the beginning of the movie, viewers can see that, in the first movie, Jodi was able to stand up for herself and show everyone in school that she will no longer accept feeling different and weird because of the way she was made. After a bad breakup with a tall Swedish exchange student named Stig, her longtime best friend Jack Dunkleman, or “Dunk” for short, shows her his true feelings, and now they are about to be celebrating their three-month anniversary.

However, it’s not all rainbows and butterflies in high school due to the relentless school bully Kimmy Stitcher, who still makes a point to try to make Jodi feel bad about herself. With her newly found confidence, Jodi signs up to audition for the school play, BYE, BYE BIRDIE. However, when she lands the lead role, and Kimmy becomes her understudy, it doesn’t help anything. In fact, although she’s elated about landing the part, Jodi soon discovers a small voice inside of her head that is constantly filling her with self-doubt about her abilities to star in the musical.

With these negative voices circulating in her head, Lodi is having a difficult time being present during the romantic dinner that Dunk has prepared for their three-month anniversary. He tries to be understanding about her concerns, but when she walks out on the dinner, their relationship shortly thereafter comes to an abrupt halt. At the same time, her musical co-star, Tommy, clearly has a crush on her, and the two of them end up sharing a kiss not long after her breakup with Dunks.

With all these things occuring, Jodi begins experiencing some intense anxiety and begins to have panic attacks where she feels like she can’t breathe. Her parents and sister encourage her dreams, and even the school bully Kimmy has shown support. However, Jodi still struggles to drown out the voice inside her head telling her she isn’t good enough.

Will Jodi be able to block it out or will she allow the negativity and self-doubt take control during her big moment on stage?

TALL GIRL 2 is a cute, funny movie with high production values and sweet actors who create endearing relationships that are easily relatable and sympathetic. It’s also easy to follow along without seeing the original movie due to a small recap in the beginning of this sequel. The problems that these teenagers deal with are important issues for a young audience, without overdoing the message. Although it’s nothing revolutionary, it’s a sweet movie with an encouraging story about overcoming self-doubt and insecurities to pursue the dreams that lie ahead.

TALL GIRL 2 primarily follows a Romantic worldview, with the main message being the importance of not letting anything stand in the way of pursuing dreams. However, it also has some moral, redemptive elements, including bullies turning from their ill-intended ways to put the needs of others ahead of their own. TALL GIRL 2 has very little questionable content, with school bullies being the main bit of content. Otherwise, the teenagers are respectful to their parents and teachers, and there’s no foul language, violence, sexual content, or nudity. TALL GIRL 2 is a sweet, encouraging family movie.