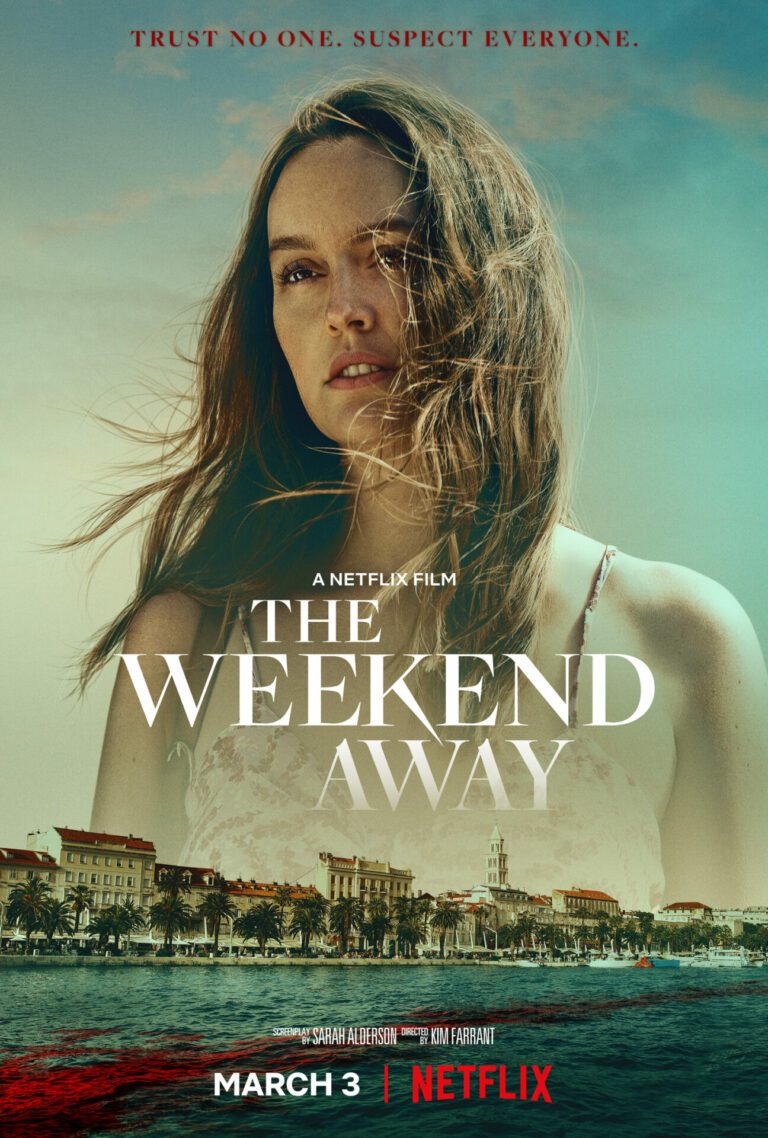 THE WEEKEND AWAY is an intense thriller on Netflix. Beth and her best friend, Kate, spend a weekend vacation in Croatia. Kate is coming off a breakup with her ex-husband, Jay, and uses his credit card to pay for their dinners, taxi drives and other expenses. Though Beth is having problems in her marriage, she tries to bow out of Kate’s ravenous appetite for partying and sex. Kate convinces Beth to go to a club with her, but Beth wakes up the following morning unable to remember anything from the night before. However, Kate is missing, and Beth tries to uncover the truth. Beth soon realizes she can’t trust anyone, even her own husband.

THE WEEKEND AWAY is an intense, well-made crime thriller. The movie keeps viewers guessing but is marred by strong objectionable content. For example, the movie contains some sexual content, nearly 20 obscenities and profanities, heavy drinking, and some implied drug use. It also focuses on the lead female character’s psychological turmoil. However, THE WEEKEND AWAY has a light moral worldview that extols friendship and justice. MOVIEGUIDE® advises extreme caution.

(B, PaPa, LL, VV, SS, N, AA, DD, MM)
Dominant Worldview and Other Worldview Content/Elements:
Weak moral worldview that’s mostly focused on the thrills involved in a mystery thriller, with one example of a true friend who proves to be faithful and a light example of justice prevailing, but lead female character’s friend has a hedonistic, immoral attitude that gets them into trouble
Foul Language:
Six or seven obscenities and about 11 profanities, including two Jesus profanities, plus woman vomits after drinking heavily the night before
Violence:
While the violence is not particularly gory, it runs throughout the movie, a woman is murdered and drowns (this happens off screen, but her dead body is shown several times), a woman drops a wine glass on her foot, and there’s some blood, a man chases and tackles another man, a woman in an effort to escape slams a man’s nose with a door and causes his mouth to bleed, a man hits his head on a table, and there are many conversations about possible sexual violence, but they are never depicted or confirmed
Sex:
Briefly depicted fornication between a man and a woman (though there’s no nudity) is shown through a computer screen and difficult to see, woman in her underwear kisses two men in a hot tub, a major plot point is that a wife is unaware of an affair involving her husband, this is emotional and intensely depicted throughout the movie, and one character finds condoms
Nudity:
Cameras reveal some upper male nudity, a woman is seen in her underwear, voyeurism is implied by some criminals but never fully shown, and a woman wears revealing clothing
Alcohol Use:
Heavy alcohol use throughout the movie, two women friends are drunk before they even go out clubbing the night of one of the women’s disappearance, but the connection to their excessive drinking and the situation is clearly stated
Smoking and/or Drug Use and Abuse:
No smoking, woman discovers that another woman had snorted cocaine, and there are other mentions of drugs as a possible reason for the first woman’s lack of memory; and,
Miscellaneous Immorality:
Characters lie and deceive their alleged friends, some lie as a way to protect those they love but the consequences of their actions result in emotional and physical turmoil, woman encourages married woman to be unfaithful to her husband and to divorce him (this occurs before the married woman discovers her husband’s own unfaithfulness and deceit).

THE WEEKEND AWAY is an intense thriller on Netflix about a married woman who takes a weekend vacation in Croatia with her female friend, but, when her friend goes missing after a hazy night of partying, tries to uncover what happened. THE WEEKEND AWAY is a well-made thriller with a light positive worldview extolling friendship and justice, but it’s marred by brief sexual content, violence, about 20 obscenities and profanities, drunkenness, and implied drug use.

Beth travels to meet her best friend Kate for a weekend getaway in Croatia. Although they are still friends, Beth apologizes for not checking up on Kate after her breakup with her ex, Jay. Kate brushes off the apology because Beth recently had a baby, and Kate says she is still using Jay’s credit card to pay for dinner and their trip.

After their first dinner in the city, Kate wants Beth to let loose and go clubbing with her late into the night. Despite her tiredness, Beth agrees. Kate continues to encourage Beth to drink, and they are drunk by the time they start talking to two handsome men at a club.

Beth wakes up the following day and can’t remember anything from the night before. When she looks around the apartment, Kate is nowhere to be found. Beth begins to worry that the two men kidnapped her after she finds broken glass and blood on the ground.

Beth’s husband and the police assure her that Kate is probably out clubbing and will return soon. Beth is skeptical, however. With the help of a new trusted ally, a taxi driver named Zain, she finds that the men from the club stole Kate’s purse and phone.

Beth tracks down the purse and phone and convinces the police to get involved in the mystery of Kate’s disappearance and their night of drinking. As Beth continues to uncover the truth, she realizes she can’t trust anyone.

Her husband eventually comes to offer his support, but this only leads to Beth’s most shocking discovery of all. With all odds against Beth, she works to uncover the truth about her friend Kate, the police, Zain, and her husband.

THE WEEKEND AWAY is an intense, well-made crime thriller. The movie keeps viewers guessing but is marred by strong objectionable content. For example, the movie contains some sexual content, nearly 20 obscenities and profanities, heavy drinking, and some implied drug use. It also focuses on the lead female character’s psychological turmoil. However, THE WEEKEND AWAY has a light moral worldview extolling friendship and justice. MOVIEGUIDE® advises extreme caution.

Watch THE WEEKEND AWAY: