"Marred By Some Romantic, Woke Politics" 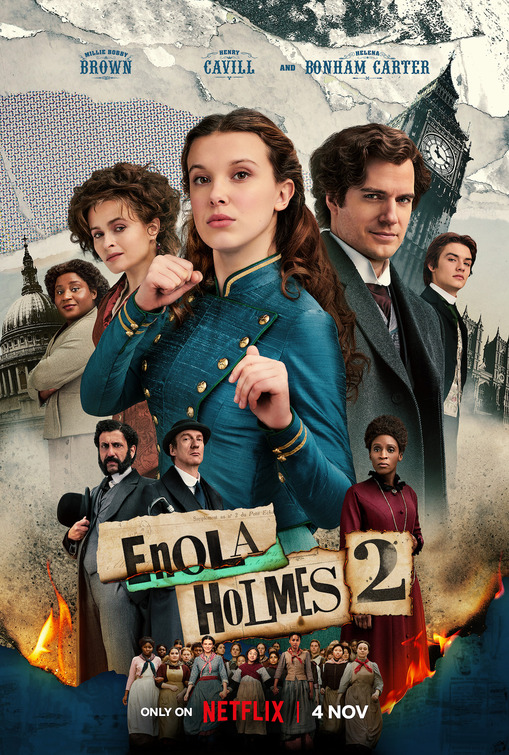 In ENOLA HOLMES 2 on Netflix, Sherlock Homes’ younger sister takes a missing persons case, her first as a detective. Bessie, a young girl working in a matchstick factory, hires Enola to search for a young missing woman working in the factory, who’s taken Bessie under her wing. Enola finds out the case has to do with some shady activities by the factory owner. She also learns that her case is related to a case that’s vexing her brother, Sherlock. The stakes are raised when Enola is framed for the murder of another girl working at the factory.

ENOLA HOLMES 2 is an exciting, fun mystery adventure paying wonderful homage to the iconic detective, Sherlock Holmes. The performances are delightful. The movie has some positive moral content about exposing corruption and protecting the weak. Also, one scene has strong, winsome metaphorical references to the Holy Trinity and Jesus Christ. This positive content is marred by a light Romantic worldview with some woke casting, revisionist history and feminism as well as some violence. MOVIEGUIDE® advises caution for older children for ENOLA HOLMES 2.

(Ro, PC, RHRH, FeFe, BB, ACAC, CC, CapCap, L, VV, A, D, MM):
Dominant Worldview and Other Worldview Content/Elements:
Light Romantic, liberal worldview overall calls for reform in a corrupt part of the system in Victorian England, where female workers at a match factory are being damaged by a corrupt businessman working with a corrupt government official, some politically correct woke casting inserting black characters into what is historically a system with only white people running it and in it, the woke casting is part of the movie’s revisionist history which sees political reform as being only a liberal, leftist cause when it’s a fact that conservative and free market political theory allow for economic and political reforms as well as noblisse oblige within the conservative, free market system, movie has strong, anachronistic feminist elements that side with the title character’s mother who is a more radical leftist than most of the suffragette activists of the time, but the liberal, left-leaning worldview is mitigated by some strong moral elements that celebrate doing the right thing, noblisse oblige, stopping a wicked plan developed by a corrupt government official and a corrupt businessman, plus there’s a scene with overt Christian content that refers to the Holy Trinity and Jesus in a positive, somewhat metaphorical, delightful way
Foul Language:
Two “h” wrds and two light profanities
Violence:
Some strong and light violence includes a few deaths and murders, a woman is shown with a bloody knife through her stomach, two major fight scenes involving the title character and villains, a character falls to his death, gunshots, knife fights, a sword fight, explosions, threats to a young girl and a young woman with knives held to their throat, angry villain grabs title character’s throat in an interrogation, a chase scene between three women in one carriage and a carriage full of policemen
Sex:
There’s an implication in a lengthy scene at an upper class ball in London that the women and men give visual signals to one another that express a romantic and other sexual interests that are frowned upon in polite society, a young couple kisses, a flashback shows another couple embracing on a couch, there’s some flirting, it is said that a missing young woman working at a match factory also worked as a dancer in a musical hall where she met a high class guy (the manager suggests it was an immoral dirty affair, but he turns out to be wrong), and the title character twice kisses her love interest (they tell each other they love one another), but their budding romance is depicted in a very clean, lovable way
Nudity:
No nudity
Alcohol Use:
Some alcohol use and the title character stumbles upon her elder brother, Sherlock Holmes, who appears to be drunk while investigating a case in a tavern
Smoking and/or Drug Use and Abuse:
Brief pipe smoking and references to cigar smoking, but no drugs; and,
Miscellaneous Immorality:
Dysfunctional family portrayal, corruption and class prejudice.

In ENOLA HOLMES 2 on Netflix, Sherlock Homes’ younger sister takes a missing persons case for a young woman working in a matchstick factory and finds the case has political ramifications connected to a case vexing her brother, Sherlock. ENOLA HOLMES 2 is a fun, exciting mystery adventure with strong moral content and a delightful metaphorical scene referring to the Holy Trinity and Jesus, but it’s marred by a Romantic worldview with some woke politics, revisionist history and feminist elements.

Sherlock’s younger sister, Enola, has something to prove. She wants to be taken seriously as a detective. Enola believes she has the right qualifications, including jujitsu training. She puts her shingle out and is eager for business. One by one, she’s insulted and rejected because she’s a young women in an era where she can’t possibly be taken seriously. One customer even asks, “Is your brother available?” Deflated, Enola’s about to end her pursuit, when a little girl named Bessie pleads for help finding her missing sister, but the sister turns out to be just a kindly young woman who’s taken Bessie under her wing. Enola accepts her first case.

Like the older girl, whose name is Sarah, Bessie works in a matchstick factory run by a greedy tyrant. Enola follows clues that lead her from the dregs of society all the way to the top. She even runs into her brother, Sherlock Holmes himself, who has a vexing case that turns out to be connected to Enola’s case.

The stakes are raised when one of Sarah’s friends turns up murdered, and Enola is framed for the crime.

Sherlock tries to free Enola, but, somehow, the villains have planted Enola’s fingerprints on the murder weapon. So, he seeks out their mother, a feminist rabble rouser, to help Enola escape from prison.

Time is running out, however. Can Enola and Sherlock solve the two cases before more people are killed?

ENOLA HOLMES 2 is an exciting, fun mystery adventure with enough nods to the Sherlock Holmes stories by Arthur Conan Doyle to satisfy all but the most demanding fan. Millie Bobby Brown and Henry Cavill both do a wonderful job as Enola and Sherlock Holmes, though Sherlock here is a more athletic version of the iconic detective.

ENOLA HOLMES 2 has some strong moral elements about exposing corruption in both government and big business and protecting the weak. It also promotes noblisse oblige, the biblical, conservative ideal that requires wealthy and powerful people to help and protect the community, poor and needy around them. Finally, one scene has strong, delightful metaphorical references to the Holy Trinity and Jesus Christ.

However, this positive content is marred by some woke casting of actors of African descent in what was a white culture, the culture of Victorian England. The movie also has some strong revisionist history in that it assumes that the urge to reform society and correct injustices is purely a liberal, leftist one. In reality, conservative political and economic theory allows for the need sometimes to pass reforms and correct severe injustices. The poor treatment of female workers, including teenagers and children, in London matchstick factories was one such injustice.

ENOLA HOLMES 2 also has some strong feminist references. However, they are mitigated by a delightful romance between Enola and a young upper class reformer in the House of Lords. The movie also contains an implied attack on big government corruption.

All in all, MOVIEGUIDE® advises caution for older children when it comes to the Netflix production of ENOLA HOLMES 2, which also contains some strong violence.

Runtime: Time is running out, however. Can Enola and Sherlock solve the two cases before more people are killed?