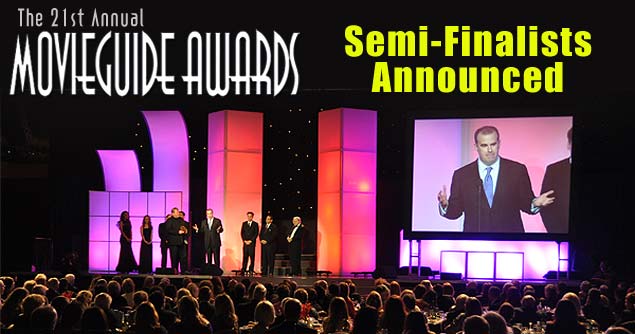 Hosted by Joe Mantegna (“Criminal Minds”) and his daughter, Gia Mantegna, the Movieguide® Awards are attended yearly by the top studio heads and executives in Hollywood, and honor films with uplifting and family-appropriate messages.

These two categories of best movies are awarded to movies suitable for families and mature audiences, respectively, which exhibit moral values and/or a redemptive storyline. Any feature film can be nominated, regardless of box office gross or number of major stars. Movies rated G or PG are eligible for the “Family” category, while those rated PG-13 or R may be nominated in the “Mature” category.

“The Movieguide® Awards are one of the only places where the greats of Hollywood walk side by side with the entertainment industry’s youngest and most promising newcomers,” says Dr. Ted Baehr, publisher and founder of Movieguide®.

Over the coming week, the two semifinalist lists will be boiled down to 10 nominees each. At the Gala on February 15th, each of the nominees will receive a special award, and then one movie will be crowned as winner in each category.

Out of this year’s semifinalists, 20th Century Fox and Walt Disney studios garnered the highest number of nominations in the Best Movies for Families category, with Fox having five semifinalists and Disney having four semifinalists. Magnolia Pictures’ documentary “Jiro Dreams of Sushi” was a surprise nomination, completing the list of family films along with New Line’s “Journey 2:  The Mysterious Island” and DreamWorks’ “Madagascar 3:  Europe’s Most Wanted” and “Rise of the Guardians.”

This year’s semifinalists in the “Mature” category contain a number of big blockbusters such as “Marvel’s The Avengers” and “The Hobbit:  An Unexpected Journey,” lined up beside Academy Award nominees “Zero Dark Thirty” and “Les Misérables” and smaller-budget action films “Red Dawn,” “Red Tails,” and “Act of Valor.”

The Movieguide® Awards’ criteria make this the only show in Hollywood where many large-grossing popular movies have a chance at winning an award. However, smaller movies also have an equal  chance. “Act of Valor” from Relativity Media and “Red Dawn” from Sony Pictures made less in the box office, but are both semifinalists for a Movieguide® Award.

Movieguide®’s Faith & Values Awards have long been a trendsetting environment in the entertainment industry. The Jonas Brothers’ first major performance was at the Movieguide® Awards, and Oscar® nominee Jennifer Lawrence walked her first red carpet at the Awards Gala. Other stars to see a beginning at this event include Hayden Panettiere, Dakota Fanning and Miley Cyrus.

The focus at the Movieguide® Awards, however, is not only on the celebrities. Producers, directors and studio executives join the many actors and actresses as the movies’ messages and themes themselves are honored.

“The nominations for our many other awards, including the Grace Awards for Inspiring Acting in Movies or Television and the $100,000 Epiphany Prizes, will be revealed next week,” Dr. Baehr said yesterday. “The finalists for Best Movies for Families and the Best Movies for Mature Audiences will also be announced then.”

The lists of semifinalists are: