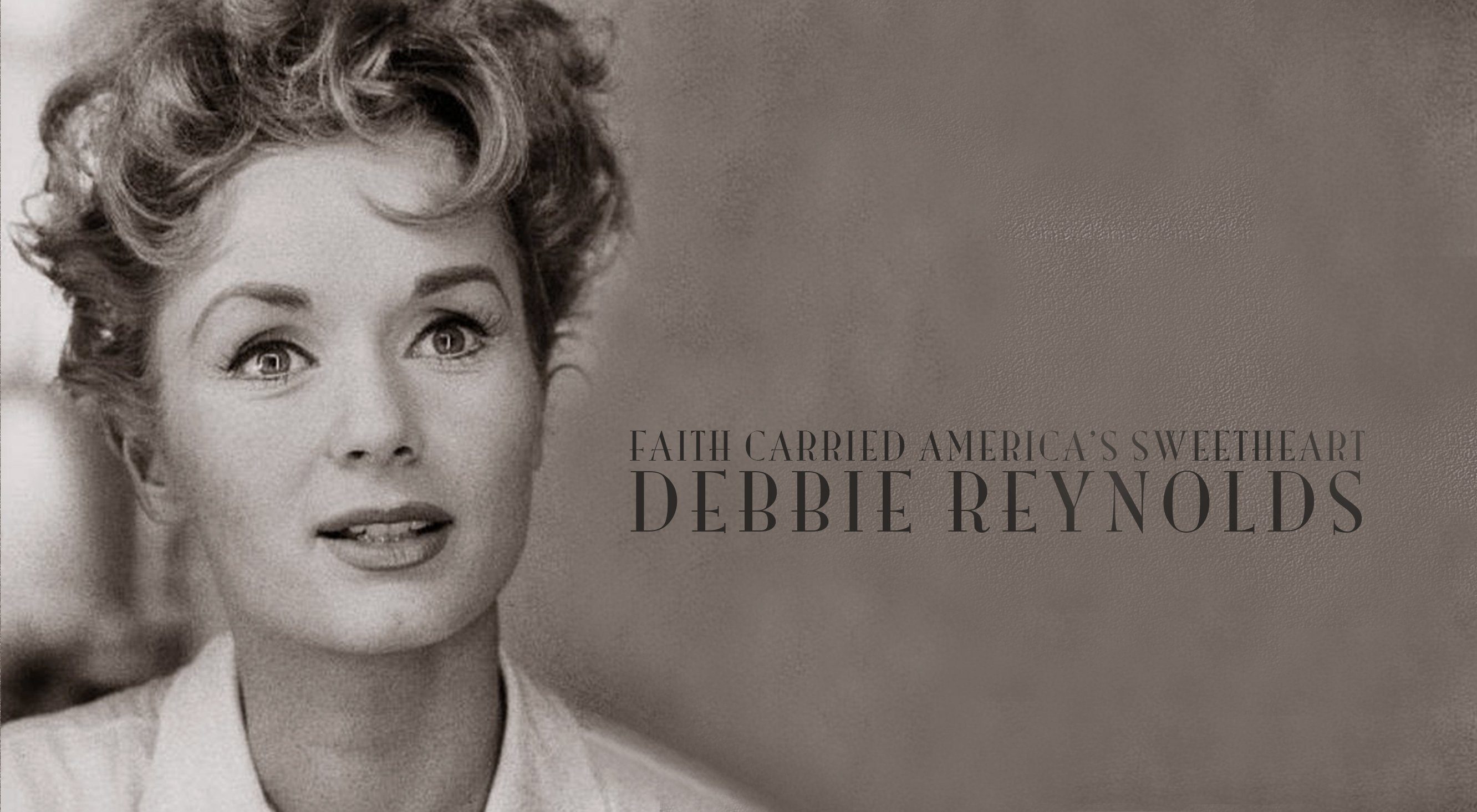 Hollywood legend, Debbie Reynolds was one of America’s Sweethearts, who sang and danced into the hearts of many throughout the Golden Age of Hollywood through such movies as SINGIN’ IN THE RAIN and THE UNSINKABLE MOLLY BROWN.

Reynold’s died recently at the age of 84 after suffering a stroke that followed the death of her daughter, Carrie Fisher, who had died of a heart attack the day before.

Debbie Reynolds was a Christian who attended a Hollywood Presbyterian Church. Her daughter, Carrie, and son, Todd, were her children by her first husband Eddie Fisher. Todd Fisher became a Christian pastor and has always been open about his faith. Carrie, who struggled with bi-polar disorder and addictions, described her faith:  “I love the idea of God, but it’s not stylistically in keeping with the way I function. I would describe myself as an enthusiastic agnostic who would be happy to be shown that there is a God.”  Debbie asked for prayer when Carrie died, and Todd asked for prayer when they both died.

Debbie Reynolds credited her faith with helping her find peace after two miscarriages and for helping her with strength and perseverance after three failed marriages, failures to preserve Hollywood historic costumes and memorabilia, and financial failures. Through it all, she maintained optimism and her warm, engaging smile and personality.

In a Guideposts interview, Debbie said, “I think sometimes God gives you a talent, and he has a plan…. I was raised in religion…. My grandfather was what they called a lay preacher. He’d go to different homes and lay his hands on and read the Bible to the sick. We went to tent meetings and revival meetings…. My life is based on faith. The most important thing is to have faith and believe in the wisdom beyond your years,” she said.

Debbie Reynolds, who was born in 1932, became known for many notable facets as: an American actress, singer, businesswoman, film historian, and humanitarian. She was nominated for the Golden Globe Award for Most Promising Newcomer for her role as Helen Kane in the 1950 film THREE LITTLE WORDS. Her first leading role at 19 years of age was in 1952 as Kathy Selden in SINGIN’ IN THE RAIN, which began her on a path to fame. Her other successes included many other notable movies, including HOW THE WEST WAS WON.

She received a Golden Globe nomination for starring in her own television show, THE DEBBIE REYNOLDS SHOW, in 1969.  In 1973, Debbie starred in a Broadway revival of IRENE and was nominated for the Tony Award for Best Lead Actress in a Musical. She was also nominated for a Daytime Emmy Awards for TV shows.

As well as her Oscar nomination and five Golden Globe nominations, in 2015 Carrie presented her mother with the Screen Actors Guild’s Lifetime Achievement Award. At the 2015 Oscars, Reynolds was awarded the Jean Hersholt Humanitarian Award for her advocacy for mental health issues.

At the peak of her stardom, Reynolds was pulled into a scandal when her husband, singer Eddie Fisher, left her for actress Elizabeth Taylor. Debbie eventually reconciled with Elizabeth. Reynolds also reconciled with her daughter, Carrie, after years of estrangement. When Reynolds’ song “Tammy” from her 1957 movie “Tammy and the Bachelor” hit No. 1 on the singles charts, she became a regular on the NBC THE EDDIE FISHER SHOW.

“I always go by a five-year plan,” Debbie once said. “I get through today, and I’m not going to get upset for five years…. I always picture a long tunnel and at the end of the tunnel, there’s a light. I know I can make it to that light, and I’ll take five years to get there. Now, I’ve gone through many tunnels. So, I just keep trying. I never give up.”

Reynolds also once said, “If you behave well during a painful time in your life, I believe your life will turn around. You have to be courageous; keep going forward. It’s hard. You have to be an adult, grow up.” Debbie who had arthritis and osteoporosis continued, “…but I deal with it because I have to. I have good people who keep me going down the railroad track. If you look through a tunnel at the end is light. Whatever troubles you’re having, remember that.”

Unlike her daughter, harmful addiction evaded Reynolds, who said that her goal was “to remain happy” and continue performing live shows “as long as they’ll have me.”

Movieguide® will miss Debbie Reynolds and Carrie Fisher and prays that their family is comforted in this difficult time.