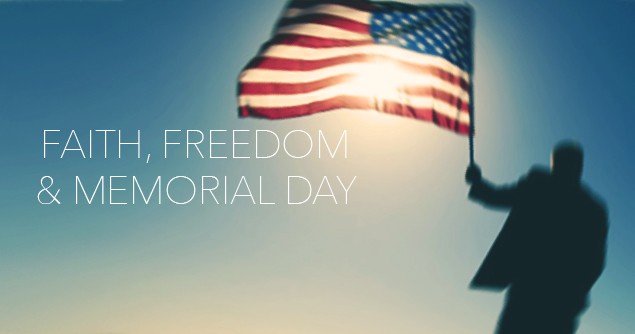 Every year Movieguide® gives out a Faith and Freedom Award for movies and for television. We honor such movies as CAPTAIN AMERICA: THE WINTER SOLDIER and such television shows as THE LAST SHIP. The reason is much the same as why we celebrate Memorial Day.

Freedom is not free. It comes at a very high price.

On January 1 2015, my father died. He served in World War II as a pilot. He flew C-47s in several battles, dropping paratroopers or pulling gliders. As a boy, I used to listen to stories about him seeing the plane in front of him shot down, or the time when a roommate’s belongings were collected because he was killed in a training accident. I would nearly burst with pride that my father risked his life in defense of America. Many young men his age did not live to come home and have children and grandchildren.

Many young men the age of my son gave their lives in Iraq and Afghanistan. Why?

Why should we risk American soldier’s lives in France, Italy, Germany, Japan, Korea, Vietnam, Iraq or Afghanistan? Is it to ensure the world has an ample supply of American pornography? Is it so we can export vulgarity throughout the world in the media? No. These are shameful abuses of American freedom.

The freedom many young Americans have given their lives for are the core values of the United States — the same values Movieguide® gives out to its Faith and Freedom Awards to honor:

Freedom to pursue the employment of your choice

Freedom to own property free of government interference

Freedom to own a business and be rewarded for hard work

Freedom from fear of thieves and murderers

Freedom to write and speak in favor of, or opposition to, anything

Freedom to elect your government representatives

Such freedoms are so much a part of being an American that we take them for granted. We see them as just the way life is.

It is not that way everywhere. Millions of people from around the world want to come to the United States because they don’t have such freedoms.

In the Middle East, you can be killed for believing in Jesus Christ. Even your children can be beheaded. In China, you’re told how many children you can have (one). Militant Muslims shout their desire to enforce Muslim law on the entire world. They declare Jihad (holy war) on the world. They wish to force their beliefs on others, as have Communists, Socialists and Environmentalists.

Contrast this with the greatest freedom of all: faith in Jesus Christ.

Christians do not march through countries beheading “infidels”. They don’t put unbelievers in gulags. If you don’t believe in Jesus Christ, and you live in the United States, you’re free to believe as you please. Christians seek to spread their faith by sharing the Gospel (“the Good News’). That news is simply this: “Jesus Christ gave his life that you might experience that greatest freedom of all: freedom from bondage to sin).”

The greatest thing about America is not our freedoms listed above. It’s the faith the majority of Americans have in Jesus Christ that leads them to be more kind, compassionate, generous, honest, and productive. Even unbelievers in America grow up in a culture that expects honesty, courtesy, integrity and hard work. We expect shoppers to pay for what they take from a store not because they fear the police, but because they want to do the “right” thing. This is why Americans find images of looting repulsive.

Without faith in God, and a corresponding desire to do what’s right, freedom becomes a license and an excuse to live immorally. It provides golden opportunities to scam others and sell toxic securities. It allows you to seek government favors that take money from others and give it to you.

Without faith in Jesus Christ, and the moral values He taught, democracy and free enterprise devolve into thuggery. The dominant take what they wish from the weak. Bureaucrats decide what you’ll pay, what you’ll get, and what you must do.

The Movieguide® Faith and Freedom Awards seek to honor movies and television programs that promote this vital combination. Similarly, Movieguide® celebrates Memorial Day by giving profound thanks to those who gave their lives in defense of a nation built on faith and freedom.