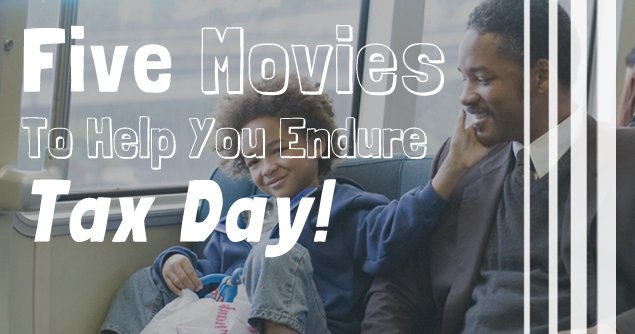 Tax day is upon us, so what better way to endure the “National Government Day” than watching a fun movie about truth, liberty, justice, and the American Way? If you watch closely, you’ll notice some insightful, often hilarious jabs at big government in some of these movies.

5. THE PURSUIT OF HAPPINESS

THE PURSUIT OF HAPPYNESS, starring Will Smith and his real-life son, is based on the true life and struggles of Chris Gardner as he attempts to create a better life for himself and his young son. One of the most inspirational movies, the movie puts forth a strong message about a parent’s commitment to their child and that with hard work and a belief in one’s self, great things can be accomplished.

JOY is an extremely entertaining story about a devoted, divorced mother trying to provide for her family, who invents a new kind of mop, but experiences financial obstacles in marketing it to American housewives. JOY is a delightful, inspiring movie for teenagers and adults, with positive Christian, pro-capitalist content, but MOVIEGUIDE® advises caution for light foul language and some dysfunctional behavior.

In MUPPETS MOST WANTED, Kermit the frog is mistaken for the world’s Number One Criminal, who fools Kermit’s friends so he can steal the Crown Jewels of England. MUPPETS MOST WANTED is a delightful romp for the whole family, with lots of songs and a lesson against being selfish.

PENGUINS OF MADAGASCAR is a delightful, often hilarious animated feature where the lovable team of spy-crazy flightless birds must stop a mad purple octopus bent on the humiliation and destruction of all penguins everywhere. PENGUINS OF MADAGASCAR is an excellent piece of family entertainment that’s fairly wholesome and contains really strong, heartwarming moral, redemptive lessons for everyone.

This Frank Capra classic stars Jimmy Stewart as a young man who’s tricked by a corrupt Senator and a greedy, powerful lobbyist. MR. SMITH GOES TO WASHINGTON demonstrates that the little guy can stand up to big government. A watershed movie for the average citizen and for clean politics, it serves as an example that Big Government cannot crush the human spirit. It also shows that evil prevails when good people do nothing. MR. SMITH GOES TO WASHINGTON continues to sound a clarion call for ethics, morality and integrity in our highest offices.