HALLOWEEN and THE BIBLE 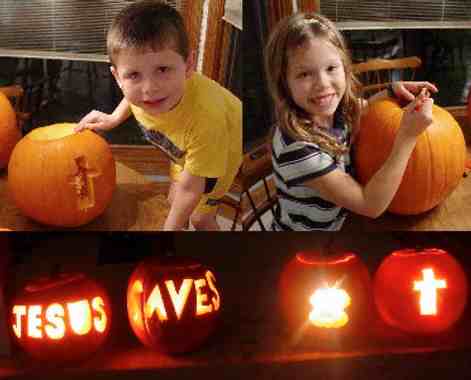 “Test all things; hold fast to what is good. Abstain from every form of evil.” 1 Thessalonians 5:21-22

A Celebration of Evil

Halloween is a religious day, but it is not Christian. Tom Sanguinet, a former high priest in Wicca has said: The modern holiday that we call

Halloween has its origins in the full moon closest to November 1, the witches’ new year. It is a time when the spirits (demons) are supposed to be at their peak power and revisiting planet earth… Halloween is purely and absolutely evil, and there is nothing we ever have, or will do, that would make it acceptable to the Lord Jesus.

Halloween has strong roots in paganism and witchcraft. It began as the Druid festival of Samhain. The Celts considered November 1st the day of death, because, in the Northern hemisphere, this was the beginning of winter, the leaves were falling, it was getting darker earlier, and temperatures were dropping. They believed that their sun god was losing strength and Samhain, the lord of death, was overpowering the sun god. The druids also taught that on 31 October, on the eve of the feast, Samhain assembled the spirits of all who had died during the previous year to return to their former home to visit the living.

On Halloween, for thousands of years, druid priests have conducted diabolical worship ceremonies in which cats, horses, sheep, oxen, human beings and other offerings were rounded up, stuffed into wicca cages and burned to death. These human and animal sacrifices were apparently required to appease Samhain and keep the spirits from harming them.

To obtain these sacrifices, druid priests would go from house to house asking for fatted calves, black sheep and human beings. Those who gave were promised prosperity, and those who refused to give were threatened and cursed. This is the origin of trick or treat.

The Jack-O-Lantern has its origin in the candle-lit pumpkin or skull, which served as a signal to mark those farms and homes that supported the druids’ religion, and thus were seeking the treat when the terror of Halloween began. The World Book Encyclopedia says: The apparently harmless lighted pumpkin face of the Jack-O-Lantern is an ancient symbol of a damned soul.

While people and animals were screaming in agony, being burnt to death, the druids and their followers would dress in costumes made of animal skins and heads. They would dance, chant and jump through the flames in the hope of warding off evil spirits.

One of the popular heroes of Halloween, Count Dracula, was also a real person. Dracula lived from 1431 to 1476. During his six year reign, Count Dracula massacred over 100,000 men, women and children in the most hideous ways. He devised a plan to rid his country of the burden of beggars, the handicapped, the sick and the aged by inviting them to a feast at one of his palaces. He fed them well and got them drunk. Then he asked them: Do you want to be without cares, lacking nothing in the world? When his guests yelled: Yes! Dracula ordered the palace boarded up and set on fire. No one escaped this original house of horror.

The Word of God

“…teach my people the difference between the holy and the unholy, and cause them to discern between the unclean and the clean.” Ezekiel 34:23

“Train up a child in the way he should go, then when he is old he will not depart from it.” Proverbs 22:6

“That whoever causes one of these little ones who believe in Me to sin, it would be better for him if a millstone was hung around his neck, and he were drowned in the depths of the sea. Woe to the world because of offenses! For offenses must come, but woe to that man by whom the offense comes!” Matthew 18: 6-7

“Let love be without hypocrisy. Abhor what is evil. Cling to what is good.” Romans 12:9

“Therefore, let us cast off the works of darkness, and let us put on the Armour of Light.” Romans 13:12

“Do not be unequally yoked together with unbelievers. For what fellowship has righteousness with lawlessness? What communion has light with darkness? And what accord has Christ with Belial? For what part has a believer with an unbeliever? And what agreement has the temple of God with idols? …Therefore, come out from among them and be separate says the Lord. Do not touch what is unclean and I will receive you.” 2 Corinthians 6:14-17

“And have no fellowship with the unfruitful works of darkness but rather expose them.” Ephesians 5:11

“Now the Spirit expressly says that in latter times some will depart from the Faith, giving heed to deceiving spirits and doctrines of demons, speaking lies and hypocrisy, having their own conscience seared with a hot iron.” 1 Timothy 4:1-2

“Therefore, submit to God. Resist the devil and he will flee from you.” James 4:7

“Pure and undefiled religion before God and the Father is this: to visit orphans and widows in their trouble, and to keep oneself unspotted from the world.” James 1:27

“Beloved, do not imitate what is evil, but what is good. He who does good is of God, but he who does evil has not seen God.” 3 John 11

Instead of participating in paganism, walking with Wicca, being in harmony with Halloween, having our children celebrate cruelty, and dabbling in a day of death, we should focus our family and congregation on celebrating Reformation Day this 31 October.

It was on 31 October 1517, that Dr. Martin Luther nailed the 95 Theses on the door of the Schlosskirche (castle church) in Wittenberg, Germany. His bold challenge against the unBiblical practices of the medieval Roman papacy inspired the Protestant Reformation. All Bible believing churches should celebrate the greatest revival of Faith and freedom ever. The Reformation was one the most important turning points in world history. The energies that were released by the rediscovery of the Bible in the common tongue led to the most extraordinary spiritual Revival in history. The Reformation freed the Christians of Northern Europe from the decadence of Renaissance paganism and led to the greatest freedoms and scientific discoveries in history.

We are in a spiritual world war. Cruelty to animals, vandalism and even murders occur with far greater frequency during Halloween. Every Halloween many thousands of animals, and even people, are sacrificed in satanic rituals worldwide, while millions of other people, including well meaning Christians, participate in Halloween celebrations. Halloween is a prime recruiting time for witches and Satanists. Many people have testified that they were introduced to the occult at a Halloween party. Halloween is very religious, but it is not Christian.

“Do not be overcome by evil, but overcome evil with good.” Romans 12:21

This 31 October, take a stand against Halloween by mobilising your family and congregation to celebrate the Reformation, and to engage in spiritual warfare, earnest prayer, praying the Psalms, and sharing the Gospel with our friends and neighbours, particularly those who may be unthinkingly participating in this occultic celebration of divination, necromancy, human sacrifice and cruelty to animals.

“Finally, my brethren, be strong in the Lord and in the power of His might. Put on the whole Armour of God, that you may be able to stand against the wiles of the devil. For we do not wrestle against flesh and blood, but against principalities, against powers, against the rulers of the darkness of this age, against spiritual hosts of wickedness in the heavenly places. Therefore, take up the whole Armour of God, that you may be able to stand in the evil day, and having done all, to stand. Stand therefore, having girded your waist with truth, having put on the Breastplate of Righteousness, and having shod your feet with the preparation of the Gospel of Peace. Above all, taking the Shield of Faith with which you will be able to quench all the fiery darts of the wicked one. And take the Helmet of Salvation, and the Sword of the Spirit, which is the Word of God; praying always with all prayer and supplication in the Spirit, being watchful to this end with all perseverance and supplication for all the saints.” Ephesians 6:10-18