How Hungry Is America for THE HUNGER GAMES? 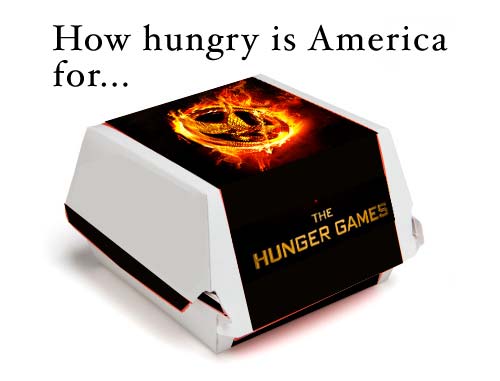 By David Outten with Tom Snyder

The Roman Coliseum was not built for a small crowd. There were plenty of Romans hungry to watch the spectacle of humans literally fighting to the death.

This Friday, one of Hollywood’s largest, most influential independent studios is releasing a film version of the young adult novel THE HUNGER GAMES. In the story, and the movie, a godless totalitarian society throws its children and teenagers into a large but confined arena to kill each other as people watch and root for their favorite “contestants.”

Are there really millions of Americans hungry to watch a movie where children fight each other to the death? Yes, it’s a movie. The actors who “die” in the movie actually get paid and live to make more movies. Even so, the spectacle is still all about children being forced to kill one another.

Is that what we want school children discussing over lunch? Children killing each other?

Few children who buy tickets to THE HUNGER GAMES will ever kill anyone, but it only takes a few. Horror stories of school killings, including a recent event in a Cleveland, Ohio school, often reveal similarities to movies the killers enjoyed.

While Movieguide® opposes the very concept of movies about children killing children, it is worth noting that the premise is that the games were set up as punishment for districts that rebelled against the central government. The very real horrors of the Roman Coliseum were administered by the government.

The concept is much like when the Nazis would kill everyone in some occupied town when, during occupation, a Nazi soldier was killed by rebels.

Many Americans killed in Iraq and Afghanistan have been killed by rebels without towns being marched out for execution. The difference between America and totalitarian states like Nazi Germany? America’s Christian heritage.

While thousands die in Sudan, Syria, Egypt and Algeria, American soldiers are scorned by the world. People look to the United States to stop senseless killing around the world, then complain when she does so. Americans are expected to police the world while being ultra sensitive to the slightest possible insult to other cultures.

Christian children should be advised not to encourage more such movies by purchasing tickets to THE HUNGER GAMES. That said, QUO VADIS was a great movie made in 1951 that contrasted Emperor Nero’s willingness to make a sport out of killing Christians with the love and compassion shown by the Christians themselves. Thus, it’s possible to show human cruelty when the message people leave the theater with is that God’s love is preferable.

Regrettably, that’s not the case with the HUNGER GAMES movie, where the heroine has to lie and hurt other people in order to survive. Unlike QUO VADIS, in THE HUNGER GAMES, there is no God and no transcendent moral order that everyone must obey.

America has long been on the road to rejecting the Christian, biblical values that made republican virtues, hard work, capitalist progress, and liberty a beacon of light to a dying, hurting world.

Consequently, our culture, including the mass media that creates our culture, is filled with misguided leaders who want to completely change God’s definition of marriage, make pornography available to children or at least teenagers, keep every teenager constantly supplied with boxes of condoms, and steal money from the taxpayers to re-distribute that hard-earned money to freeloaders, loons, rich union goons, and radical activists.

THE HUNGER GAMES is supposed to be mere fantasy, but it seems like part of the problem. If one of the biggest movies of the year so far rejects or neglects America’s Christian heritage, then maybe a tyrannical leader like Nero or Hitler has indeed become a distinct possibility for the land of the free and the home of the brave.

You can read the Movieguide(R) Review HERE.