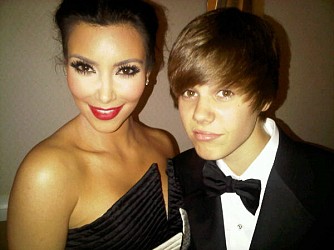 In today’s culture, the term “cougar” refers to an attractive mature woman who can still attract young men. According to About.com, a cougar is “primarily attracted to and has sex with significantly younger men.” The site also notes that “cougars prey upon men almost young enough to be their sons.”

At 29, Kim Kardashian could be called a cougar and recently projected that image in a magazine photo shoot with 16-year-old pop star Justin Bieber. Sadly, Bieber

looks more like a 13-year-old — adding to the pedophilic look and feel of the photos.

Kardashian’s dalliance with Justin Bieber has netted her the publicity she seems so insatiably to crave. Her famous face, however, would join other Hollywood celebs as a PSA for statutory rape if she were to take her sexual teasing to a consummation of the relationship. California’s age of consent is 18, and Justin Bieber is still a minor.

Kim Kardashian and Justin Bieber were featured in a Bahamas photo shoot for Elle magazine. Both wore wet and clinging clothes in the shoot titled, “The Graduate,” harkening back to the ‘60s movie starring Dustin Hoffman and Anne Bancroft. The movie featured Bancroft as an older woman out to seduce a college-aged Hoffman. But Bieber isn’t a college graduate; he’s a high school teenager.

In the sleazy Elle shoot, Kardashian showed plenty of flesh, so much so that one Fox News program slammed her (she is the supposed adult involved) and questioned whether the shoot was appropriate.

The most intellectually-challenged comment on the show’s guest panel that night came from Fox News business correspondent Rebecca Diamond, who argued, “It’s every 16-year-old male’s dream to have pictures with Kim Kardashian.” Apparently, Diamond sees nothing wrong in toying with a teen’s affections. Nor does she appear to realize the damaging impact of such behavior on society.

The host noted that there would have been outrage had it been an adult man with a 16-year-old girl. He’s right, and it’s time for women to assume equal responsibility.

As a society, America has established a trend of giving female predators a pass; the most notably being female predator teachers. Communities still see women as nurturers and caregivers. However, female predators provide alcohol and pornography to minors and groom them like any male predator would. Will this trend become even more popular as Hollywood, via glossy photo shoots like the one in Elle, continuously romanticizes adult/child relationships?

And a question to Miss Diamond: Are you ready for those 16-year-old boys to become fathers? Many female predators force teen boys into that role at an early age. These boys are victims of adult sexual abuse, and that’s not something to be celebrated!