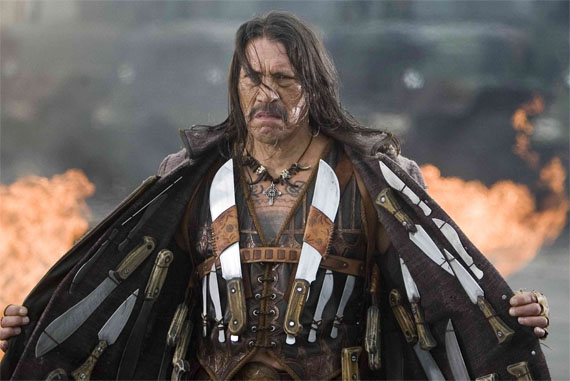 MACHETE reached the #3 spot at the box office [2] opening weekend. But after viewing the film, it is clear that its producers lied about the extent of the film’s racial message, which includes vulgar atrocities, including the killing of a pregnant woman attempting to cross the border during one of the opening scenes. This deception about the film’s message could bring its tax incentives, worth millions in production costs, into question [3].

When Alex Jones expressed concern in May that

a leaked script portrayed white characters [4] as vehemently racist and wantonly murderous, or that a Latino mob is roused to take on border vigilantes in racial conflict, director Rodriguez assured Ain’t It Cool News, [5] that he’d ‘had too much tequila,’ and that those types of scenes wouldn’t make it to the final edited version.

Producer Elizabeth Avellan went on the attack [3] just before the release, defending the tax incentives ‘Machete’ had practically already been assured [6]. Avellan denounced the ‘uproar over the film’ as “unfounded and unnecessary,” stating there was ‘no reason for a denial of incentives’:  “A lot of people made up a lot of stuff in terms of what the movie is about and who the bad guy is,” she said. “There were a lot of things that people misconstrued … without even knowing the script and pretending they have a script.”

Now there is no doubt. Everything Jones quoted from the script [4] was on screen in one form or another- and its tone was clear: opposition to illegal immigration is tantamount to murder, white racism and vile Machiavellian scheming. One scene that was excised from the script repeated the one-sided demonization of theFreedom Force vigilantes, who were to murder a young child on the border at the end. However, that ending was left behind for a different sequence altogether.

Reviewers like ‘Big Hollywood’ panned the film as ‘Dull, Convoluted, Racist and Anti-American,’ [7] criticizing that: “‘Machete’ offers no middle ground, no reasonable, non-racist position against wide open borders for those fleeing from what one character describes as the “personal hell” that is Mexico.”

Who the illegals fight against on screen is one thing. What their words mean is altogether something else.That’s the shell game Rodriguez plays and his racially divisive messaging goes way beyond the normal cinematic political posturing and button-pushing. And you will never see a more stereotypically racist portrayal of Southerners, who, in an obvious reference to the border Minute Men, are not only played for cheap laughs but portrayed as sub-human animals who hunt and murder illegals – kill a helpless pregnant woman and say “Welcome to America.”

Rodriguez & crew played everyone as fools, knowing full well what the film would contain. Does Texas want to subsidize the films of Robert Rodriguez and continue to give him a platform to spew divisive racially-tinted trash oriented at Hispanics and attempting to radicalize their views? Rodriguez is the face of the Texas Film Commission’s tax incentives program [8], and has been virtually guaranteed up to $60 million in rebate funding for a package of films.

Blood-soaked and dripping with hate

It wasn’t the extreme levels of violence or its nudity that made this film so offensive; it was the one-sided approval of Hispanic revenge killings while uniformly demonizing the actions of the white groups involved. Though the head Mexican drug lord was the ultimate enemy, he was served exclusively by white politicians and radical groups; everyone in ‘The Network’ worked against him.

What’s more, the film was marketed towards Hispanic groups, including widespread promotion throughout Latin America, featuring a poster with an image of a blood-dripping machete[9] (the symbol of peasant uprising). Now Hollywood’s exports aren’t just American cultural hegemony, but a weaponized-subsection of radicalized Latino culture that draws in crowds by playing to Hispanic supremacy.

‘Machete’ star Danny Trejo embraced his image as the ‘the first Latino superstar’ in an interview with HipHopNation.com [10], stating “It’s an honor to be considered the first Latino superstar. Or I should say the first Latino action hero!” He continued: “I think Hollywood is afraid to realize that the Latino audience is the largest that they’ve got. As long as they think that a Latino can’t carry a movie, its going to stay that way. Robert Rodriguez who is innovative and brilliant, he knows what we’ve got. The other great thing is that he put some strong Latina ladies in the movie like Michelle Rodriguez and Jessica Alba. Lindsay Lohan also stars in the movie and she might as well be Latina (laughs).”

Keep in mind that Fox 20th Century films, a division of Rupert Murdoch’s NewsCorp empire financed ‘Machete.’ Its news division pulled a story criticizing [11] the film’s violent ‘war on immigration.’ [12] While Fox’s film division funds ‘Machete,’ Fox News stokes heat over the Arizona immigration battle and beyond. At the same time warhawks at Fox News fumed over the Ground Zero mosque controversy, it was revealed that the mosque is financed in part by a top Fox News owner [13] (who is Saudi) as well as many top Western philanthropies like the Ford Foundation, among others. Meanwhile Fox also funds diversity filmmaking [14] programs.

Why would racist, elitist eugenicists groups like these finance radical minority movements? The strategy is to divide and conquer, breaking America into bands of opposing groups.

There’s not been such an openly racist film in America since the early days of cinema where the pro-KKK ‘Birth of a Nation,’ [19] and films featuring Charlie Chan and other “coolies” [20]epitomized a cruder era of filmmaking full of offensive stereotypes. 70s exploitation films don’t come close to ‘Machete,’ despite inspiring much of its style. Today, such depictions from early cinema have been denounced. Why then would today’s politically-correct culture who denounce these stereotypes accept and praise a racist filmmaker who pans to the Hispanic market?

The messages in culture, including how ethnic groups are portrayed, are clearly important to discuss in our society. Propaganda has been synonymous with films since the beginning- when Soviet propagandists, like Eisenstein [21], and later Nazi propagandists, headed by Goebbels [22], used it as a weapon of cultural influence. While Rodriguez has a right to make as hateful and racist a film as he dares, the State of Texas should be hesitant to institutionalize support for his extreme views, given that the Film Commission has a policy to selectively refuse funding that depicts Texas in a bad light [23]. The film ‘Waco’ was sent packing, so why should ‘Machete’ have Gov. Rick Perry’s blessing and budget?

Do its themes grace Texas, or glorify a ‘Reconquista’ view of the United States mainland?

In the Mexploitation film ‘Machete,’ white characters who ran with the Hispanic crew felt the need to justify their presence. “I was adopted,” one Anglo wanna-be gangster told Machete as he attempted to rally a Latino posse. Hispanics, like Jessica Alba’s character, who worked for the white system as an I.C.E. (Immigrations & Customs) officer, redeemed herself by betraying “the law” for “what’s right.”

Alba’s conversion, which ended in her rallying a crowd of migrant workers by declaring “We didn’t cross the border; the border crossed us,” was inspired by Luz. Played by Michelle Rodriguez, Luz operates a taco stand as cover for her role as head of ‘The Network,’ an underground organization that helps to transport migrants across the border and situate them within the U.S. Its influence is channeled through the pervasive myth of Luz’s alter-ego “She,” the militant female version of the revolutionary leader Che. ‘The Network’ becomes a sort of underground railroad for the plight of the immigrant, seeking refuge from the ‘Hellhole’ that is their collapsing country. In the film, that effort is thwarted by the white racist Von, who torches her headquarters while his band of vigilantes called ‘Freedom Fighters’ prepare for their next border raid to mow down helpless illegal aliens. Von & his boys also conspire with a crooked state Senator played by Robert DeNiro to construct an electrified border fence that literally fries trespassers instantly.

Even the non-violent parts of the film are littered with mini-lectures about the justification for immigration or on the dignity of brown people and day laborers. And while the film had plenty of humor, its stab at border issues was, as Kurt Nimmo noted [25], anything but satire. It is more of a racial polemic, fueled by Rodriguez’ one-sided philosophy, that declares symbolic dominance through Machete’s mythical exploits and ultimate victory.

– ‘The Network’ of Latinos was continually virtuous while the Freedom Force, a vigilante group cast with caricatures of hillbilly trash, neo-N azi types and fat slobs, repeatedly use terms like “wetbacks,” “cucarachas,” “parasites,” “beaners” and more.

– A scene in a hospital where it is declared that illegal immigrants are usually refused emergency care, but Machete is lucky that ‘The Network’ is there to help him this time. (In reality, the cost of health care for undocumented illegal immigrants, for both emergency care, births, public education and beyond is burdensome to every Southern border state, as well as in many other areas.)

In closing, Fox News writer James Pinkerton has written a news story about Machete titled “The Reconquista is Here.” [26] Let’s just hope the Fox executives don’t pull the plug on this one.

[8] Rodriguez is the face of the Texas Film Commission’s tax incentives program:  http://governor.state.tx.us/film/news-detail/12279

[9] poster with an image of a blood-dripping machete:  http://www.infowars.com/will-machete-release-spark-racial-violence/

[13] is financed in part by a top Fox News owner:  http://www.democraticunderground.com/discuss/duboard.php?az=view_all&address=389×8992753

[16] given millions to the National Council of La Raza:  http://www.eutimes.net/2010/08/bill-melinda-gates-foundation-gave-millions-to-la-raza/

[20] Charlie Chan and other “coolies”:  http://en.wikipedia.org/wiki/Charlie_Chan

[23] Film Commission has a policy to selectively refuse funding that depicts Texas in a bad light:  http://www.infowars.com/racist-film-machete-produced-with-taxpayer-funds/

[26] titled “The Reconquista is Here.”:  https://www.foxnews.com/opinion/the-reconquista-is-here