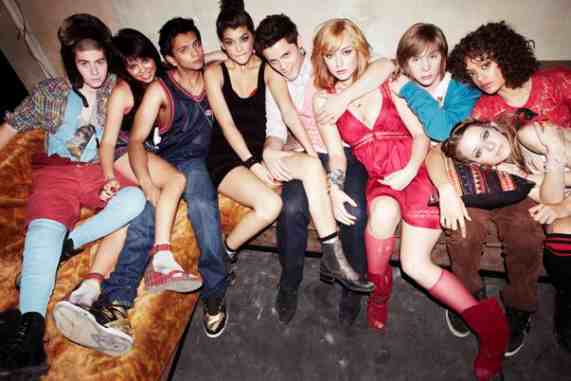 Remarkably, however, even legal concerns did not stop the morally corrupt company from releasing their new avalanche of filth on America’s children. In fact, they’re delighted with the controversy — the series attracted a record breaking 3.3 million to its premiere Monday night among viewers ages 12 to 34. (Nielsen reported the episode drew 1.2 million people younger than 18.)

Despite the number of highly impressionable twelve year olds watching it, the series is rated MA (mature audiences) yet it features underage children in various stages of undress and sexual situations. The rating itself suggests that the series is intended to attract adult viewers so that they too can watch underage children engaging in sexual behavior. This is the purest definition of pedophilia.

MTV is not a newcomer to assaulting decency standards of basic cable in America. Their infamous “Jersey Shore”, already the poster child series for all things despicable in American pop culture, caused Governor Chris Christy to publically distance his fine state from the sleaze fest. Even though the actors in this sex and booze-fest are at least legally adults, MTV execs admitted they had trouble getting advertiser support for it initially—but that was before its ratings started to grow.

Once the ratings improved, national advertisers were quick to drop their moral compass in the toilet and finance the disgusting series, causing MTV execs to proudly proclaim: “We have advertisers scrambling to get on it …we’re turning them away.”

Advertisers, millions of us can live quite well without your brands from now on. Remember, “The bigger they are the harder they fall” and especially in a well-networked world of consumers. (Read “Do Advertisers Have Children?”)

Parent company Viacom’s chairman, Sumner Redstone, said of the sudden stampede of major ad sponsors to their programming of cultural decay, “…the light is brighter than it’s been for some time.” Of course, Mr. Redstone’s definition of “light” and yours are likely galaxies apart. (For more on the aging Redstone’s affinity for money and young girls, read the New York Post article quoting an insider saying, “It’s no surprise that he’s an old man who likes young girls. Anyone who follows him around knows that.”)

Having seen the three-minute trailer (which we decided not to post), I can tell you it’s Sodom and Gomorrah right here in America. Only this time it’s with children and on television for all the world to see. To the Middle-Eastern religious world we’re already the Great Satan, given MTV’s 138 international feeds, largely propped up by American advertisers. Wait until they see “Skins” featuring children.

I can’t imagine any advertiser being supportive of a 15 year old girl pouring the contents of a prescription pill bottle into her mouth while others pour alcohol down her throat, then having indiscriminate sex in a bathroom and passing out on the lawn at an underage rave. But the show was packed with shameless national advertisers like Schick Hydro, H&R Block, L’Oreal, Subway, Foot Locker, Orbit chewing gum and Extra chewing gum. GM and Taco Bell pulled their sponsorships today likely because of the national outrage, as they are frequent sponsors of other toxic programming on MTV.

Two decades ago, an MTV exec was quoted in their own coffee table book entitled, The Global Images of MTV saying, “…we’re going to have to push the envelope a little further each year to keep our audience (of kids).” Mission accomplished MTV. American youth are frozen in place in the moral ice age of your making.

If corporate America continues to stand with toxic pop culture and against our kids this there is no chance of America returning to civility. Long before “Skins”, MTV and its dozen feeds have proven year after year to parents that they do not deserve space on basic cable—yet American advertisers beg to differ to the tune of nearly $1 billion annually.

Don’t depend on the (missing) moral compass of Madison Avenue. Your brand would do well to understand the movement in America to return our great nation to a sense of decency. Stop lining your pockets by trashing our kids. Because media really matters in a nation under God, we’ll be watching you and voting with our purchasing power from now on.

Please pass this column along: “Skins” may be the wake up call we’ve been waiting for. Don’t allow MTV or their advertising partners to stick their finger in your eye any longer. Make note of the sponsors mentioned above and chose other brands.