Randy Newman Sings with a Smile in Texas for PBS 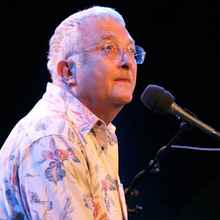 
The performance, scheduled just 24 hours after the Academy Award Winner’s memorable set in Zilker Park, was a special live taping for Austin City Limits. The PBS sponsored program is the longest running music series in American television history. Free tickets to the tapings, allocated through an online lottery system, are usually in high demand.

The beautiful Moody Theatre, home to the show since the new downtown venue opened in February 2011, has a capacity of just over 2700. No seat is more than 75 feet from the stage. ACL live tapings are intimate affairs, capped at no more than 800 guests.

Met with an enthusiastic crowd, Newman did not disappoint. He also received a standing ovation before he had time to sit down at the piano.

A clear forte of the set, which opened with his hit “Mama Told Me Not to Come,” was Newman’s attention to sequencing – an often forgotten aspect of the recording business that guided his assembly of THE SONGBOOK 2. For Newman, an album represents far more than a disparate grouping of individual works – it’s a story. With that in mind, Newman recorded 50 songs for THE SONGBOOK 2 and then pared them down to 16 on the album.

Throughout the evening, Newman’s witty and good-natured sense of humor shone through as he took on in passing a wide variety of topics from music and movies, to immigration, foreign policy, family, and growing older.

“We Belong Together,” for which Newman won an Academy Award for best original song in 2011, was a clear crowd favorite.

“You’re adults,” Newman told the audience. “So for those of you who didn’t see the movie, it’s about a kid who has a cowboy doll. . . So he gets a spaceman doll and he supersedes the cowboy doll who gets put on the shelf.

“The people at PIXAR I had problems with,” he added facetiously. “The first few times I saw the picture I didn’t realize it was animated, I was so into what I was going to have to do.”

Regarding his contagious sense of humor, Newman remarked, “I should have my own TV show.”