Jane Russell on the Struggle of Being a Christian in Hollywood 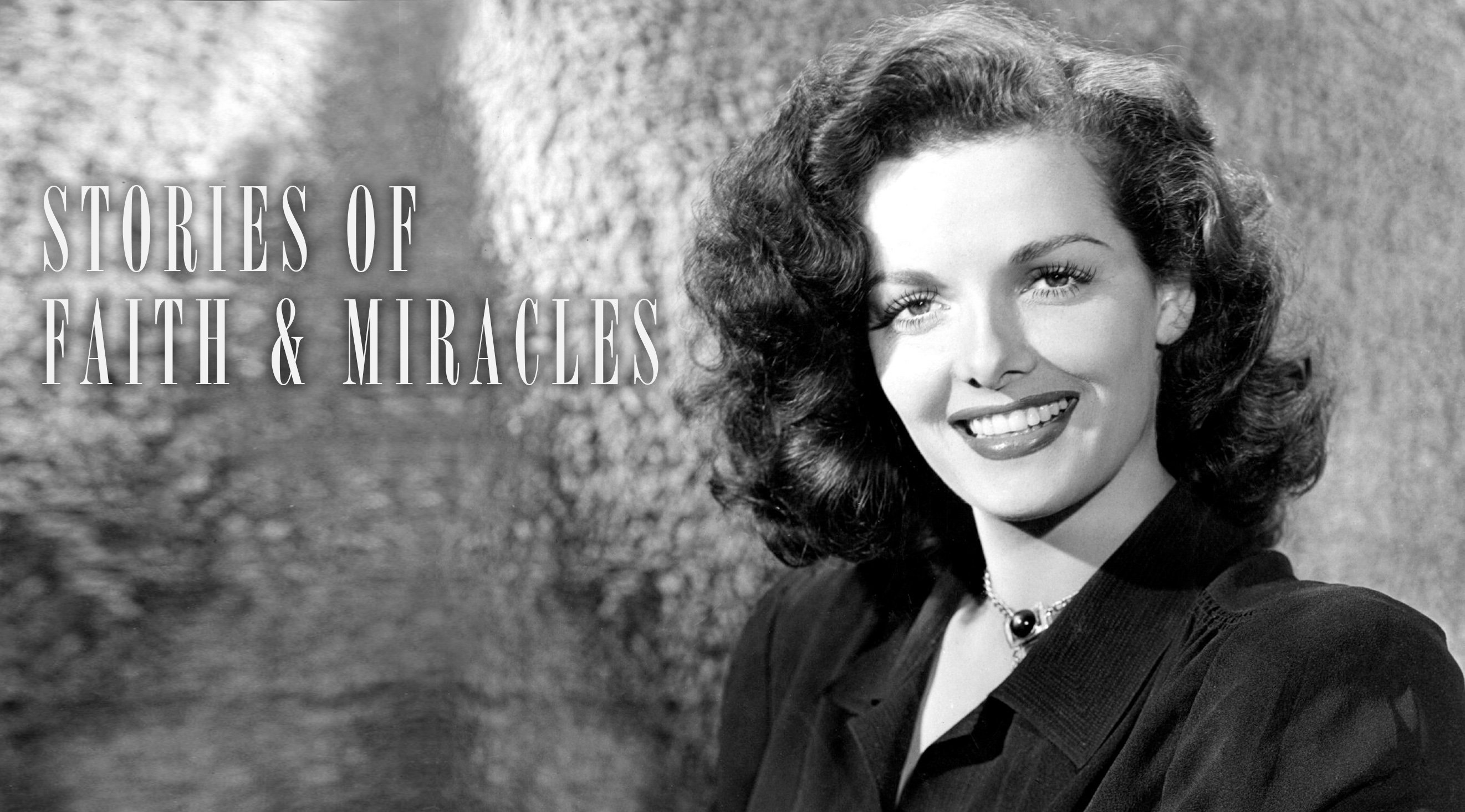 Stories of Faith and Miracles:

Jane Russell on the Struggle of Being a Christian in Hollywood

Therefore, since we are surrounded by such a great cloud of witnesses, let us throw off everything that hinders and the sin that so easily entangles. And let us run with perseverance the race marked out for us. . . (Hebrews 12:1)

When Dan asked her why she came each year to the event, she replied, “Because Dr. Ted Baehr and his team at Movieguide® are doing the best job in the world, and I just hope that all the movie makers will finally catch on that things that are good for families make twice as much money as the other ones — the bad, naughty ones,” she said.

Jane, a committed Christian, then urged other Christians to tell Hollywood the type of movies they wanted.

“They should say they want good family movies instead of the other kind,” she advised.

Jane Russell’s distinguished movie career began in 1940, when she was signed to a seven-year contract by millionaire Howard Hughes. Jane was known for her physical beauty along with Marilyn Monroe and Lana Turner. However, her faith was central in her life as she expressed when she said “I love the Lord.”

Jane had a wonderful sense of humor. Pointing North reports that two of Jane’s most famous movies were “Gentlemen Prefer Blondes” with Marilyn Monroe and “Paleface” with Roy Rogers and Bob Hope.

“Bob Hope was a ball to work with,” she said. “He was even funnier off screen than on, and everything was relaxed except his chocolate eyes which never stopped darting, never missed a thing.”

“It was wonderful to work with Bob,” she recalls. “We felt such a sense of privilege about our work with the troops.”

Jane Russell’s mother was a devoted Christian whose husband passed away at 47.  When Jane was young, she gave her heart to the Lord and was baptized.

Jane said in the video “Hollywood on Fire” that her mother was a wonderful Bible teacher. The Lord was faithful to Jane, working all for good, as she worked in movies, on stage and doing recordings. Like her mother, Jane would also host Bible studies in her home.

In a fascinating, lengthy interview with Peter Chattaway, Jane said, “I gave my heart to the Lord when I was five. My mother, who had been. . . a stage actress. . . became one of the best Bible teachers I ever heard. I had four brothers. . ., and we heard a Bible story every day. Things happened later in my life where I thought I knew what I was going to do, but instead of that, things happened. . . . I call them the Lord’s accidents. They’re not accidents to Him at all. He’s got it all planned, but it turns you around, and you’re doing something you didn’t think you were going to.”

Jane told of fellowship with other Christians in Hollywood.

“In those days, we had what we called the Hollywood Christian Group. It was from the Presbyterian church in Hollywood. There was a woman that was absolutely so smart. She said, ‘I want the president of USC, and the president of UCLA in my Bible class,’ and she got them both, and then the kids from both of those universities were coming together. . . . She ended up with about five ministers that came out of that group. One of them ended up going into Washington, and it was just amazing. . . . She gathered Connie Haines the singer, myself, Rhonda Fleming, and Della Russell, and she said, ‘If you girls would invite stars who have come from other states into your home and have a minister come and give them a talk, they would all come.’ So we started doing that. . . . It got bigger and bigger. . . so, they started having it in theatres or Sunday classes or something. Roy Rogers and Dale were coming. . . . It was very popular.”

She ended the interview with advice for those interested in careers in Hollywood, “Well go ahead and do it, for Heaven’s sakes, but you don’t have to break the Lord’s rules in it.”

Though Jane was known for her beauty, she didn’t compromise her Christian moral standards for studios.

She said, “In those days, there was a decency code that kept us safe. Studios had control of everything. You did what they wanted you to do, or you didn’t get paid.” However, in those days the Motion Picture Production Code established industry moral guidelines (1930-68). It was known as the Hays Code, after Will Hayes, the president of the Motion Picture Producers and Distributors of America (MPPDA) from 1922 to 1945. Under Hays, the Production Code was strictly enforced in 1934. From 1934 to 1954, the code was also identified with Roman Catholic Joseph Breen, who was appointed by the Roman Catholic Church to advise the MPPDA. (In 1968, after several years of minimal enforcement, the Production Code was replaced by the MPAA film rating system.)

At one point, the studio wanted Jane to wear a bikini, but she immediately protested. She told how she left the set, “but the studio scrambled and quickly came up with a one-piece alternative.” Jane told how she felt vindicated and protected.

“Now studios have nothing to say about these things. Outside people rent the areas, and it’s all independent. There’s no Breen office, no guarding. . . . It’s a terrible time today. . . . If I had to start all over today, I’d have to go home!”

The Pointing North publication reports that Jane Russell discussed how hard it is for young Christians to make it in Hollywood today. She said that Mel Gibson, for example, “had a real struggle” to get his “The Passion of the Christ” made. However, Mel was able to produce this seminal movie with great success. Jane told how she had “fought the good fight, and kept the faith” in a Hollywood not always ready to accept her views.