Lucasfilm recently fired actress Gina Carano from the hit show on Disney+, THE MANDALORIAN. But STAR WARS fans are taking a stand in support of Carano and pushing back against cancel culture.

Since Carano’s firing in February, many called out Disney and STAR WARS for their decision to drop the actress from the franchise—a decision based purely on her conservative political views.

Many have come to her defense, such as Ben Shapiro—who announced that the actress signed on for an upcoming movie through The Daily Wire—and even co-star Bill Burr.

More recently, fans have flooded the official YouTube accounts of Star Wars and Disney to show their disagreement with both companies’ decisions.

As of March 3, the most recent video posted on the Star Wars’ YouTube channel has 12,000 dislikes to only 2,000 likes. The video also has over 9,000 comments, the vast majority of which quote the actress: “‘Don’t try to ruin my life with lies when yours can be ruined with the truth’ – Gina Carano.”

The same quotation can be found on various videos posted on the Disney+ YouTube channel. 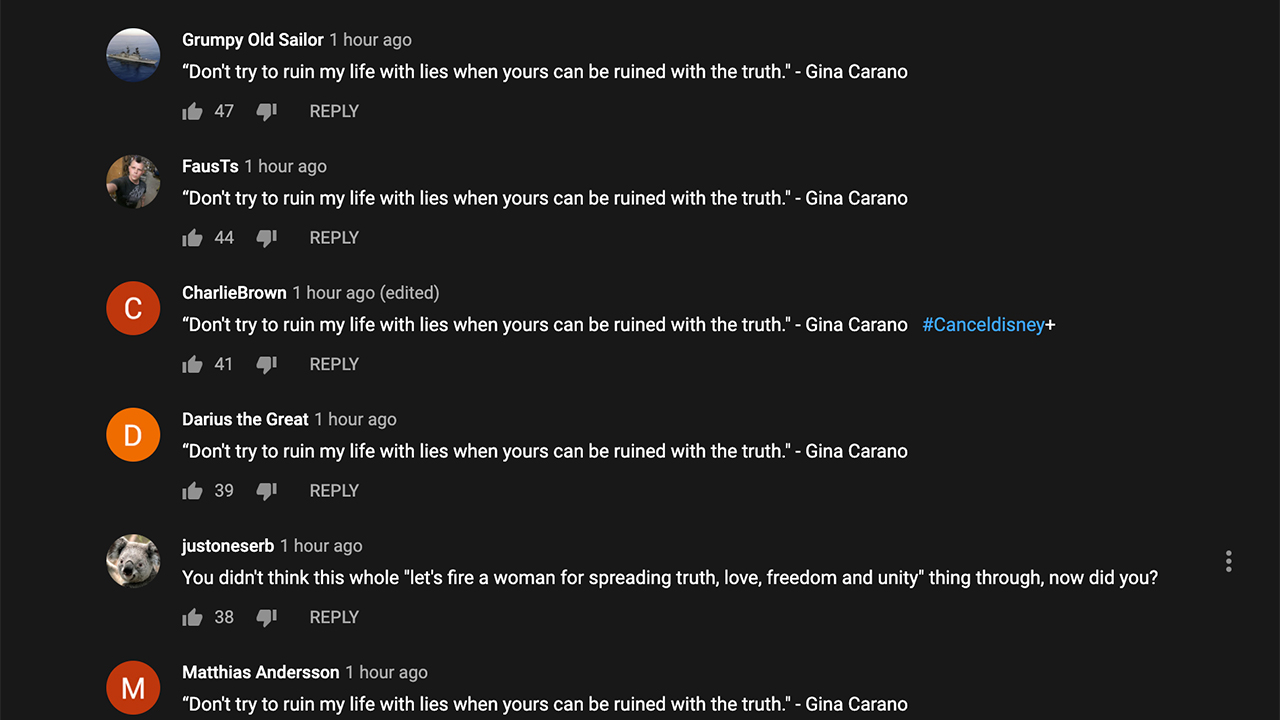 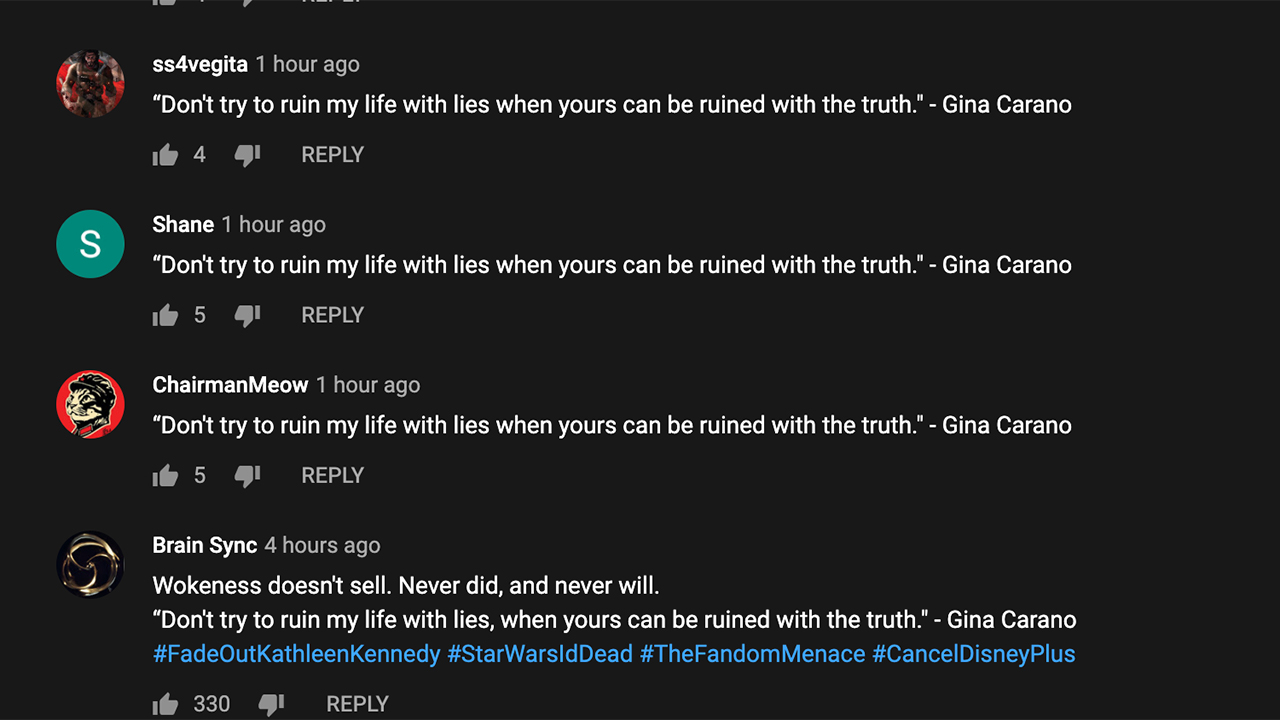 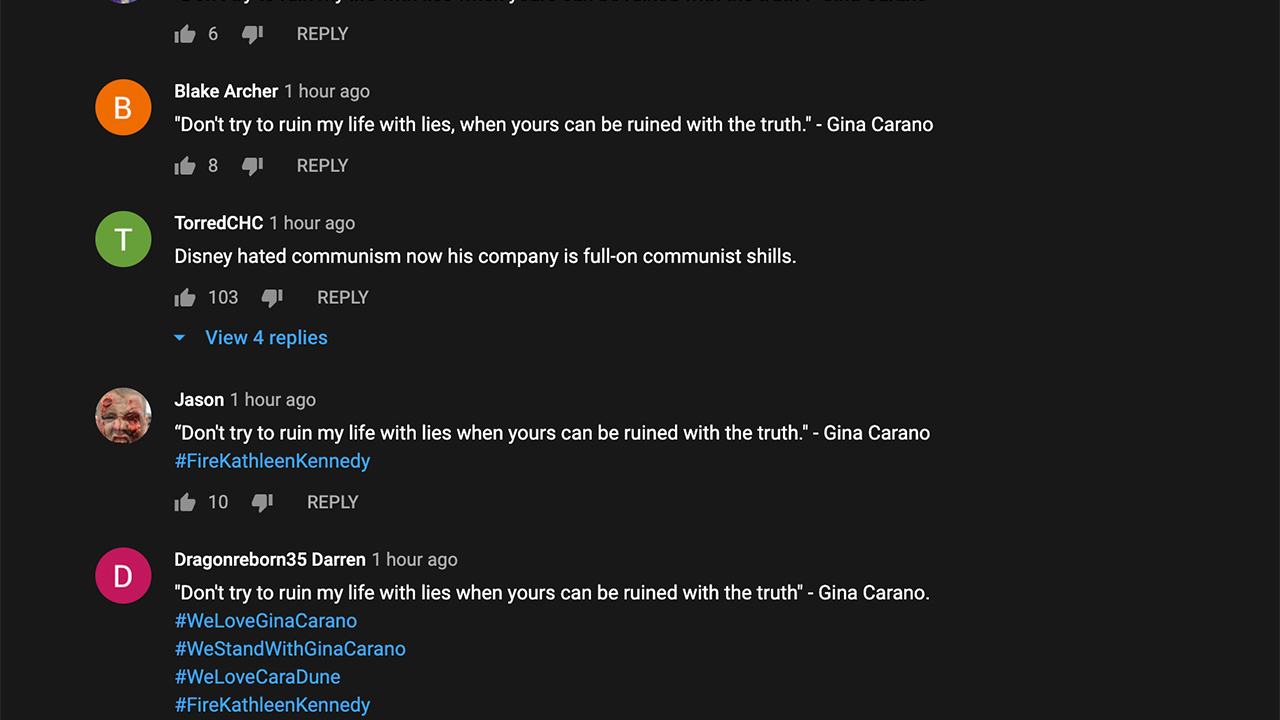 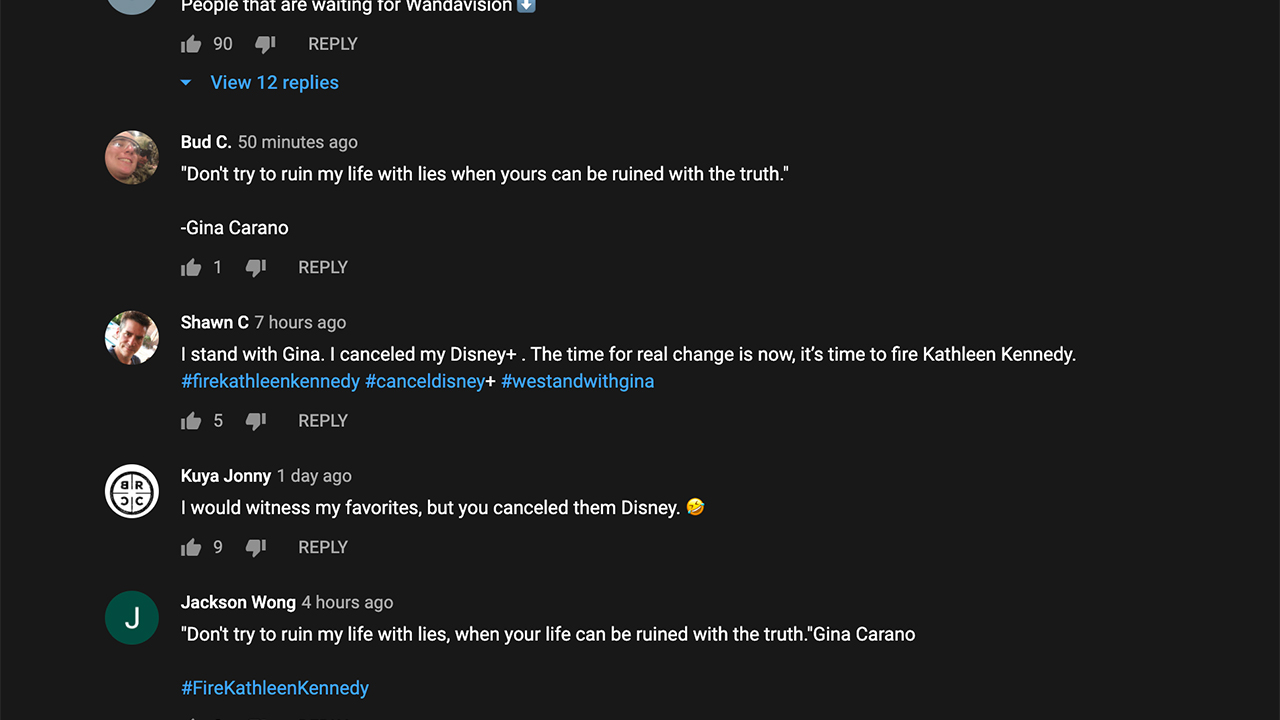 Carano addressed the incident with The Daily Wire.

After Lucasfilm terminated Carano, many fans pointed out that other cast members of THE MANDALORIAN also had politically charged tweets.

One example is when co-star Pedro Pascal compared undocumented children being held cages at the border to Jews in concentration camps. However, Carano revealed that despite their political opinions, the two stars maintain mutual respect.

“I adore Pedro. I adore him. I know he’s said and done some hurtful things. But we had an agreement after we realized we were a little bit politically different. We had an agreement that, first and foremost, you’re a human being. And you’re my friend first,” Carano told Ben Shapiro.

“That’s what’s been really crazy,” Carano continued. “You see these people [on one side] being so passionate and you see people [on the opposing side] being so passionate. I just love that we’re both passionate. We think a little bit differently, I think, through our different experiences. I know that we both have misstepped on our tweets. We’re not perfect. We’re human beings. But he’s not a bad human being. He’s a sweet person.”

Carano added: “I was prepared at any point to be let go because I’ve seen this happen to so many people. I’ve seen the looks on their faces. I’ve seen the bullying that takes place, and so when this started, they point their guns at you, and you know it’s only a matter of time. I’ve seen it happen to so many people, and I just thought to myself, ‘you’re coming for me, I know you are.’ They’re making it very obvious through their employees who were coming for me, and so I was like, ‘I’m going to go down swinging and I’m going to stay true to myself.’”