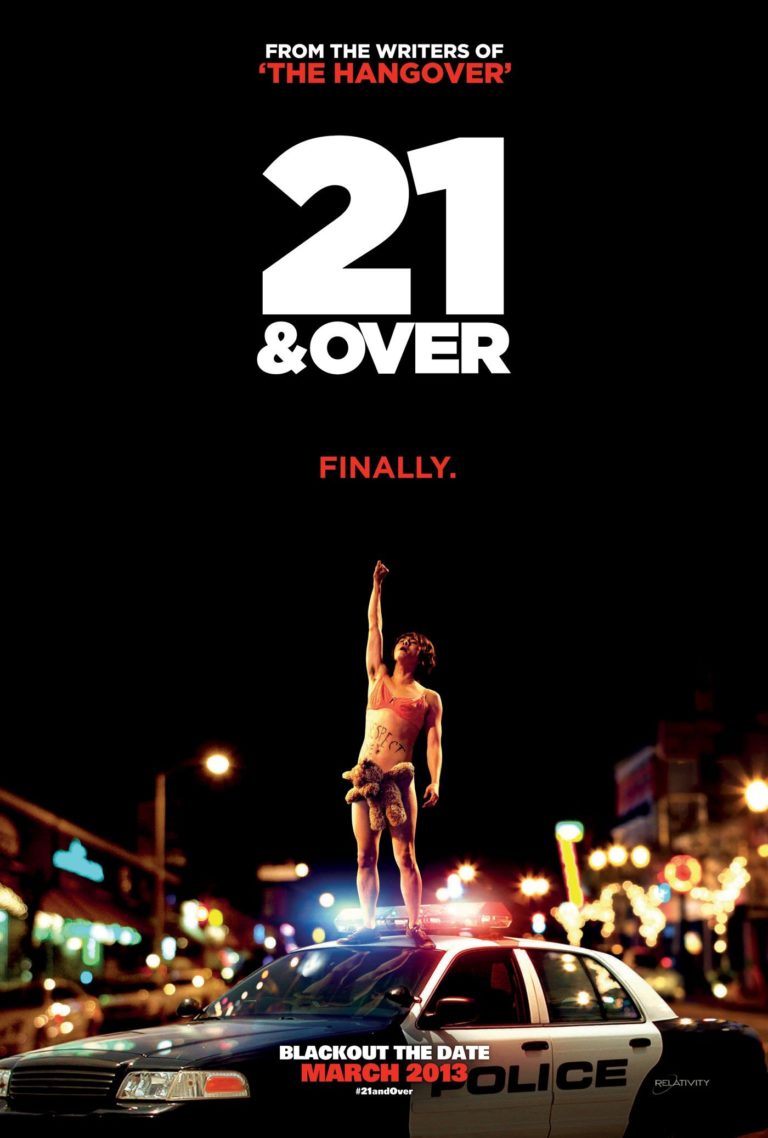 (PaPaPa, Ro, HoHo, Ab, B, LLL, VV, SS, NN, AAA, DD, MMM) A thoroughly raunchy comedy written and directed by the writers of the original HANGOVER movie, 21 AND OVER has a very strong debaunched, slightly mixed pagan worldview blended with some Romantic elements, strong homosexual content includes a lesbian scene where two blindfolded sorority girls are tricked into starting to touch each other’s breasts, and two men are actually forced to kiss one another by some sorority girls who take them prisoner for a prank, one man brags he got a Christian girl to make love with him by lying to her, and some moral elements at the end where the male leads realize that their friendship bonds have been broken and that two are secretly failing college, as the one smart lead encourages them to start over and they vow to be better friends and make sure they’re ready to help each other in times of future crises; at least 192 obscenities (including at least 135 “f” words), five strong profanities and five light profanities, plus a male lead pulls his pants down and is seen with rear nudity as he urinates on a crowd of bar patrons including women; strong comic violence at several points, including a car chase in which a stolen vehicle is driven by a sight-impaired male lead as he plows through parking meters, hits cars and endangers pedestrians as he drives through a park, all to avoid police capture, plus a male lead accidentally throws a dart through another male’s cheek, sparking a fight and later leading to comic punches and the angry victim beating the dart-thrower’s furniture with a baseball bat as revenge, and a male lead punches the father of another male lead when the father insults his son; no actual fornication shown but near-constant discussion of sex, sexual attributes of women, sexual activities, and other such topics, plus many party scenes show college-age couples kissing lustily, making it seem obvious they’re about to have casual sex, one protagonist heads off on a vacation with a girl the morning after meeting her, and an extended scene where two male leads make two sorority pledges who are blindfolded kiss each other and start to touch each other’s breasts; movie opens with a graphic close-up of bruised naked male buttocks on two male leads, then shows them walking with only socks on their private parts, but showing pubic hair around the socks, brief upper female nudity in two shots, rear nudity when a man pulls down his pants to urinate in a bar, two male leads with bruised buttocks later have to bare their buttocks to a sorority full of girls as they get beaten with paddles, two women in lingerie, and a teddy bear that other drunk males glued to the Asian male lead’s penis has to be pulled off, shown in comically graphic fashion as it gets stretched to the limit, yanked off, and the puller says they’ve just circumcised the Asian; extreme alcohol use and excessive drunkenness; drugs are talked about favorably on numerous occasions but not shown; and, very strong miscellaneous immorality includes lying, rude drunken behavior, disrespect towards parents, racial stereotypes, insults, three male leads break into a sorority house and trick girls into kissing and fondling each other, three leads escape sorority house by throwing the Asian guy off a roof and then jumping after him, and Asian protagonist tells his father he never wanted to go to medical school, laughs and says he’ll now travel and write – an utterly ridiculous plan since he just insulted the very person who’s been funding his entire college life.

21 AND OVER is a thoroughly raunchy, debauched, unsuccessful comedy written and directed by the writers of the original HANGOVER movie. It has a thoroughly pagan worldview blended with some Romantic elements and a light moral lesson at the end. The fact that it’s set at a college only makes its depicted behavior more irresponsible and annoying as it’s clear the filmmakers are targeting a high school and college audience.

The story is very simple and simple-minded, as it follows the adventures of two buddies, Miller and Casey as they visit their third best friend from high school, Jeff Chang for his 21st birthday. However, Jeff’s father is in town as well, ready to take his son to an all-important medical-school interview the next day. Therefore, they are under orders not to get Jeff drunk. The rest of the movie consists of Jeff getting drunk and getting constantly in more and more trouble at parties, pep rallies and sorority houses. Meanwhile, Miller and Casey try to round him up and get him home and ready for his interview.

Along the way, the only things that break the clichés of college partying are occasional emotional moments between the three leads as they reveal severe struggles with school that almost drove them to drastic measures. While it’s commendable that they eventually vow to be more helpful to each other in the future, these characters are so paper-thin it’s hard for audiences to care as much. Making their directing debut together, co-writers Jon Lucas and Scott Moore appear content to just repeat the elements that made THE HANGOVER hugely successful. Only this time, moviegoers get far smaller returns.

Despite the personal commitment between the protagonists at the end, 21 AND OVER is a thoroughly debauched comedy. The movie avoids inserting really explicit lewd acts, but the lewd talk is nearly constant throughout. In fact, the amount of foul language is among the highest this year, more than 200 obscenities and profanities. There’s also some brief, but explicit or very strong nudity. Media-wise and discerning viewers will want to avoid 21 AND OVER.