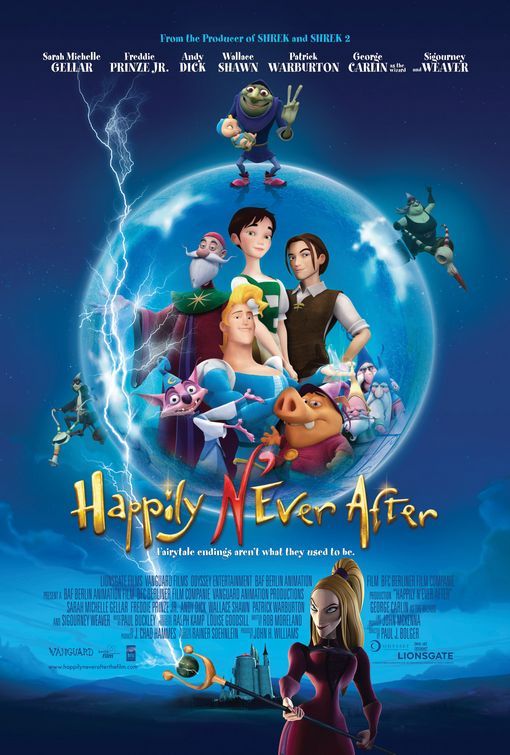 HAPPILY N'EVER AFTER is a wise-cracking animated fairy tale from overseas. Dubbed with American voices, it starts off slowly in a talky way as Rick, the personal valet and dishwasher to the clueless Prince Humperdink, sets up the story. The wizard who makes sure that all the stories in Fairytale Land have a happy ending takes a vacation. His two assistants goof up, and Cinderella's evil stepmother, Frieda, steals the staff the wizard uses to make goodness always triumph over evil. Frieda uses it to make the bad guys win. Meanwhile, Rick agrees to help Cinderella find Prince Humperdink so he can restore order. Cinderella's evil stepmother, however, has other plans.

Once HAPPILY N'EVER AFTER gets going, it has some humorous, adventurous elements that are entertaining, but not enough to really satisfy moviegoers. The movie also has some worldview problems. Although it shows viewers that they need a Supreme Being with supernatural, miraculous and/or magical powers to ensure that good will eventually triumph over evil, it often talks about "the balance between good and evil." This is a false dualistic notion that contradicts the truth of Scripture. MOVIEGUIDE® advises caution for pre-teens.

(PaPa, FRFR, BB, L, V, M) Mixed pagan worldview in a fantasy fairytale setting with an aberrant ontological, metaphysical position on good and evil, but with some positive, provocative and profound aspects about the issue of the origin of good and evil and about the human condition, including movie favors goodness over evil, movie shows witches to be evil, movie shows that the universe and human beings really need a Supreme Being, an omnipotent person or Eternal Mind with supernatural, miraculous and/or magical powers to ensure that good will eventually triumph over evil, and movie reminds viewers that personal desires are not completely reliable or positive; three words using "butt", one "heck," one "peed," one "wee wee," two or three "dangs," and character says, "He'll take that mother down"; light cartoon violence such as people fall or are knocked down, evil witches and evil stepmother fire magical bolts at people, machine fires diamonds and jewels at villains, punch, and two men slide down hill; no sex; no nudity; no alcohol; no smoking; and, Rumpelstiltskin takes woman's baby but changes his ways after taking care of it.

HAPPILY N’EVER AFTER is a wise-cracking animated fairy tale from overseas patterned after the popular SHREK movies from DreamWorks. Dubbed with familiar American voices, its story and characters are not as deep and humorous as those movies, especially the first SHREK, nor Disney’s ALADDIN and THE EMPEROR’S NEW GROOVE, which the movie also resembles. There are, however, some interesting, humorous elements that may delight children and adults. Also, the movie’s worldview teaches an aberrant view of good and evil, but it contains some provocative aspects that show why Christian theology about good and evil is so much more profound and truthful than any other worldview. Also, a song lyric played in the movie has unexpectedly profound messages about the human condition that are worth exploring with older children, teenagers and even adults, especially if they are confused.

Unlike the first SHREK, which introduces its main character in a series of humorous visual situations, HAPPILY N’EVER AFTER starts off slowly in a talky fashion as Rick, the personal valet and dishwasher to Prince Humperdink, sets up the story. The wizard who makes sure that all the stories in Fairytale Land have a happy ending and that good always triumphs over evil, takes a golf vacation in Scotland. His two dimwitted assistants goof up, of course, and Cinderella’s evil stepmother, Frieda, steals the wizard’s staff that controls the balance between Good and Evil. Using the staff, she makes sure that all the bad guys start winning. Hence, the wolf eats Little Red Riding Hood, the Prince in “Sleeping Beauty” falls asleep when he kisses her, and Rumpelstiltskin successfully steals the baby.

Meanwhile, Prince Humperdink, with glass slipper in hand, goes off in search of Cinderella, whom he doesn’t recognize because her beautiful dress has been replaced by her dirty clothes well before midnight. Cinderella thinks the clueless Prince is her ideal mate, but the Prince’s wisecracking valet, Rick, is actually the one who really loves her. He reluctantly agrees to help Cinderella find the Prince so he can restore order throughout the land. Cinderella’s evil stepmother, however, has other plans for them all.

Once HAPPILY N’EVER AFTER gets going, it has some humorous, adventurous elements. One of the best bits was about the seven dwarves in “Snow White,” who turn out to be commando survivalists with a nifty plan for taking out bad guys. The rest of the story, characters and jokes, however, are not up to the highest quality that moviegoers deserve these days at today’s high movie ticket prices.

A big worldview problem with HAPPILY N’EVER AFTER is that there’s a lot of talk about maintaining “the balance between good and evil.” This is a false, inadequate and aberrant description of the origin and nature of good and evil. Of course, the biblical position is that God is the source of all goodness because goodness is an essential part of His all-powerful, divine nature and character. Hence, as St. Augustine and other great Christian theologians and philosophers* have argued, evil is the absence and negation of God’s goodness, including his Love and Justice. There can be no “balance” between good and evil, therefore, because of God and His very existence or Being, including his benevolent divine character.

It is interesting, and really quite profound, to note that, even this little movie, which is being marketed to children and families, tells viewers that the universe and we human beings really need a Supreme Being, omnipotent person or Eternal Mind with supernatural, miraculous and/or magical powers to ensure (with metaphysical certainty) that good will eventually triumph over evil. Thus, although HAPPILY N’EVER AFTER talks about “the balance between good and evil,” it also points to the fact of the all-loving, all powerful God, who, through Jesus Christ and His Gospel, will “cut off” the wicked and lift up the righteous (Psalm 75:10). As the Apostle Paul notes about God in Acts 17:28-31, “In Him we live and move and have our Being. As some of your own poets have said, ‘We are His offspring.’ Therefore, since we are God’s offspring, we should not think that the divine being is like gold or silver or stone – an image made by man’s design and skill. In the past God overlooked such ignorance, but now He commands all people everywhere to repent. For He has set a day when He will judge the world with justice by the man [Jesus Christ] He has appointed. He has given proof of this to all men by raising him from the dead.”

Finally, there is a song lyric during this movie that has unexpectedly profound and provocative messages. In the lyric, the singer asks, “Will I get what I want? Will I want what I get?” This lyric shows clearly that personal desires and feelings are not always reliable, positive things. In the movie, Cinderella thinks handsome Prince Humperdink is the man for her. The movie’s hero, Rick (an allusion to Humphrey Bogart’s brilliantly portrayed conflicted hero in CASABLANCA, also named Rick), informs her that the Prince is not exactly what she thinks he is. Cinderella is clearly attracted to Rick and begins to question her desires and feelings. Parents can use this lyric and theme to remind their children not to put their trust in their own desires and feelings, or even in other human beings, but to put their trust and faith in Jesus Christ, because “there is but one God, the Father, from whom all things came and for whom we live; and there is but one Lord, Jesus Christ, through whom all things came and through whom we live” (1 Cor. 8:6).

All in all, because of the movie’s worldview problems, MOVIEGUIDE® advises caution for older children. We note, however, that, although the movie features a “wizard,” the witches in the story are evil, contingent creatures who serve the wicked stepmother. Perhaps some misguided feminists will think HAPPILY N’EVER AFTER is too “patriarchal.” If so, then that’s another point in the movie’s favor.

Rent or Buy HAPPILY N'EVER AFTER: