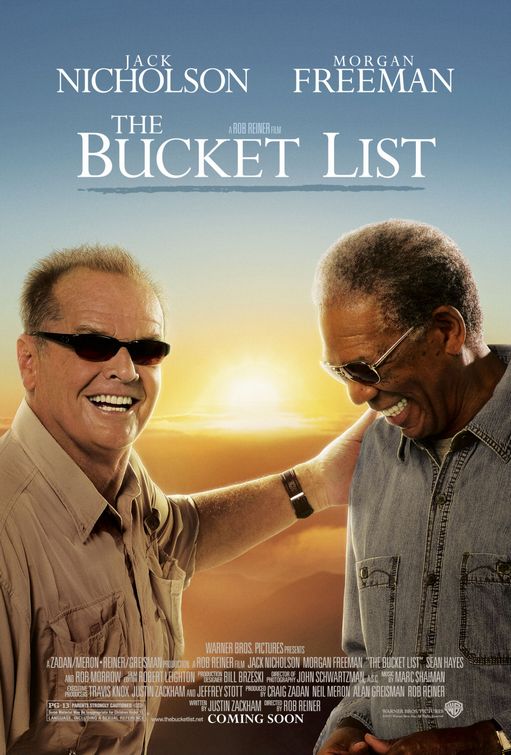 THE BUCKET LIST stars Jack Nicholson as Edward Cole, a miserly millionaire who owns hospitals, where there are no rooms with single sickbeds. When Edward starts coughing up blood, he’s brought into his own hospital, only to find a black man named Carter Chambers in the next bed. Carter is a smart man of faith, but family responsibilities kept him from pursuing his dreams. After intense chemotherapy, Edward opens up to Carter. Carter encourages Edward to write a bucket list of all the things to do before you die. The two men escape the cancer ward to do their bucket list, and Carter tries to encourage Edward to be a better person.

THE BUCKET LIST is very funny with some great moral moments. Regrettably, there are some serious moral lapses and plenty of strong foul language. The story and script would have played better without these elements and without some of the moral lapses in Morgan Freeman’s mostly positive character. The movie struggles with communicating the Christian faith, but it constantly tries to tell the Edward Coles of the world that there is a God who can give us true joy.

(BB, CC, H, Ab, FR, PaPa, LLL, VV, S, N, A, D, MM) Ultimately strong moral worldview with some clear Christian elements, such as atheist cries out to Jesus in a chemotherapy stupor and African-American family prays to God the Father in clear terms, but atheist humanist attacks Christianity and bashes other religions, such as Buddhism, and religious concepts, such as reincarnation, but believer tries to defend his Christian faith but never as clearly as he could, though there seems to be some false works theology, plus a lot of discussion of other religions, including ancient Egyptian practices for getting into Heaven; 30 obscenities and 12 strong profanities, primarily by atheist character; violent operations on people, man falls off hospital bed, scary skydiving scene, and talk about committing suicide and dying; lots of discussion about sex, man gets propositioned to have sex with call girl, wealthy man talks about arranging an orgy, wealthy man comes out of aircraft bathroom with stewardess buttoning up her blouse; upper male nudity but no sexual nudity; heavy drinking; smoking leads to cancer and suggestion of drugs; and, marital tensions, marriage mocked and dictatorial millionaire is mean to everyone.

THE BUCKET LIST is the Odd Couple at the end of their life.

Jack Nicholson plays Edward Cole, a very wealthy man who owns, among other things, hospitals. At a hearing about how his hospitals are run, he makes the point that if you have good doctors, you don’t need a lot of them (so he can be understaffed) and that he has two beds in every room because it’s a hospital, not a spa.

Well, when Edward starts coughing up blood, he’s brought into his own hospital, only to find a black man named Carter Chambers in the next bed. Carter is a genius and a man of faith, but an early marriage and family responsibilities kept him from getting his degree and kept him working as a mechanic. Edward wants his own room, but his assistant, Matthew, whom Edward calls Thomas or Phil or anything but his right name just to demean him, tells him Edward that he can’t have his own room, because it would be a PR blunder. In other words, Edward’s tough, miserly, Scrooge-like policies have finally turned on him.

After heavy chemotherapy, Edward starts opening up to Carter. Carter is preparing a bucket list, which is the things you think that you must do before you kick the bucket or die. They both have less than six months left to live. Edward wants Carter to experience drugs, sex and rock and roll, and takes him around the world in his private jet to do just that. Carter wants Edward to reconnect with his daughter and experience joy while giving joy to someone else.

Edward is a confirmed atheist. Carter tries to talk to him about faith in God. This is where the movie falls apart. The discussions are too lightweight to get anywhere. Carter seems to indicate that Edward just needs to stop letting his head getting in the way of his heart, but that is not the biblical position, which is that logic guided by divine wisdom leads us to the Gospel of Jesus Christ. Edward puts down reincarnation, Buddhism, prayer, the Tooth Fairy, and lots of other magical thought. Carter prays with his family at dinner and tries to explain the Christian faith to Edward. In the midst of his worst chemotherapy, Edward cries out twice to Jesus, but then tells everyone he was just having a bad dream.

Carter finally tells Edward that the Egyptians believed that, when you die, to get into Heaven, you have to experience joy and give joy. So, the question of the movie is, can Edward experience joy and can he give joy to someone else when he’s so selfish.

THE BUCKET LIST has some very funny things going for it. It also has some great moral moments. Regrettably, like the proverbial brownie with the feces in it, there are some serious moral lapses with plenty of strong foul language. If Carter had been a little bit more upstanding in his personal character, the movie would have worked better. At one point, he becomes very malicious, and at another point he considers adultery. In other words, the script lost its focus on who his character is.

Another problem is that the script is a series of vignettes as the two protagonists live out the sequence of activities on their bucket list. Usually such stories get tedious in the middle. Once in a while, like THE ULTIMATE GIFT, they do work, but that is rare.

Therefore, MOVIEGUIDE® recommends extreme caution and gives THE BUCKET LIST three stars. Although the filmmakers should be commended for trying hard to communicate the Christian faith, somehow they didn’t get it out clearly. Even so, one feels that the movie is constantly trying to reach the Edward Coles of the world that there is a God and He alone gives them true joy.