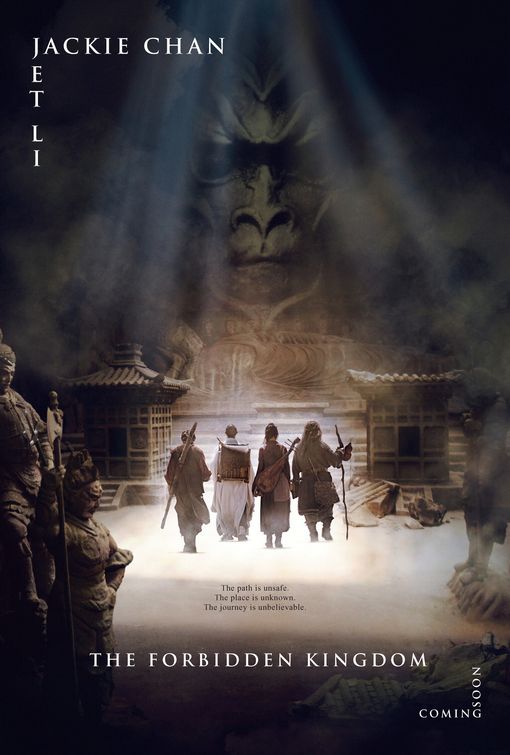 THE FORBIDDEN KINGDOM is an Americanized martial arts fantasy dealing with Chinese mythological beings. In the story, an ornate Chinese fighting staff magically whisks a young American named Jason back to ancient China. There, Jason learns he must return the staff to its rightful owner, the fabled Monkey King, so the Monkey King can be freed from the powerful Jade War Lord who imprisoned him 500 years ago. Joining Jason’s quest are three warriors, two of them played by international action stars Jackie Chan and Jet Li. Before they can challenge the Jade War Lord, Jason must learn how to use kung fu by training with Chan and Li’s characters. Everything leads to a final battle with the Jade War Lord and his minions.

THE FORBIDDEN KINGDOM is a winsome, lively and lushly photographed action fantasy that has exciting moments, especially in the climactic battle. The movie doesn’t quite deserve four stars, however. Except for a couple oblique references to Buddhism and allusions to ethical monotheism and paganism, THE FORBIDDEN KINGDOM mostly treats Chinese legends and mythology as a source of entertainment and fantasy. Nevertheless, caution and parental guidance are advised.

(PaPa, FR, B, L, VV, AA, M) Strong pagan, slightly mixed, worldview with immortal characters and a couple allusions to Buddhism (including a God-figure who goes away to meditate), ethical monotheism, paganism, and Chinese folklore, plus some moral elements, including the defeat of an evil witch; four obscenities and one strong profanity mentions Jesus; strong action violence with a little blood includes martial arts duels with people being thrown against mountains and pillars, battle scenes, man shot with arrow, woman falls to her death, etc.; no sex scenes but one chase scene goes through building where men are with women, who might be Chinese prostitutes; no nudity; alcohol use and drunkenness; no smoking; and, tyranny rebuked and magical elixir can render one immortal.

THE FORBIDDEN KINGDOM is an Americanized martial arts fantasy dealing with Chinese mythological beings. Like most world mythology, including the more familiar Greek and Roman mythology of Western Civilization, Chinese mythology is a degraded version of the biblical story of God’s creation and biblical stories of Fallen Angels, Adam and Eve, and the Great Flood. Unlike the West, however, where Judaism and Christianity rejected Greek and Roman mythology, some Eastern religions, like Hinduism and Buddhism, often literally adapt such pagan mythologies to fit them into their religious perspective. This is partly true of FORBIDDEN KINGDOM’s brief references to Buddhism in what is mostly a fantastic tale of immortal beings and fulfilled prophecies.

The movie opens in a rundown section of New York City, where young Jason Tripitikas hunts down bootleg kung-fu DVDs in a Chinese pawnshop. One day, he pokes around in a backroom where he finds an old staff from an ancient Chinese dynasty. Hop, the old man who owns the shop, tells Jason that the staff is waiting for its rightful owner to come get it.

Some young toughs bully Jason on his way back home. They force him to help them rob the old man’s pawnshop. The leader of the gang shoots Hop, and Jason tries to fight them off with the staff. In the fight, Jason, while holding the staff, falls from the roof, and the staff transports Jason back in time to ancient China.

There, Jason learns that he must return the staff to its rightful owner, the fabled Monkey King, so the Monkey King can be freed from the powerful Jade War Lord who imprisoned him 500 years ago. Joining Jason’s quest are three warriors, kung fu master Lu Yan (played by Jackie Chan), the Silent Monk (played by Jet Li), and a young female kung fu master named Golden Sparrow.

Before they can challenge the Jade War Lord, however, Jason must learn how to use kung fu by training with Lu Yan and the Silent Monk.

Everything leads to a final battle with the Jade War Lord and his minions, including an evil white-haired witch.

THE FORBIDDEN KINGDOM is a winsome, lively and lushly photographed action fantasy that has its exciting moments, especially in the climactic battle sequence. The characters are not extremely deep, however, and the action is not spectacular or thrilling enough to receive four stars. For example, the character of Jason needs a more developed backstory so that viewers could identify with him more. Thus, his motivations are too shallow, which dilutes some of the jeopardy he faces. Still, this is a solid three-star movie.

Research has shown that the concept of the Jade Emperor is tied to the earliest Chinese deity called Shang-ti or Shang-di (aka “the Highest Lord,” “the Celestial Lord” and “the Supreme God”). The concept of an ethical, benevolent Creator God called Shang-di is a sign that the Chinese people are indeed related to the line of Adam and Eve as described in the Bible. Thus, as scholars like Father Wilhelm Schmidt, Don Robinson and Mircea Eliade have shown (see MYTH CONCEPTIONS [Baker Books] by Dr. Tom Snyder), Buddhist, Taoist and other legendary depictions of the Jade Emperor in China are actually later distortions, or heretical descriptions, of the God of the Bible who gives all men life.

In its depiction of the Jade Emperor, THE FORBIDDEN KINGDOM mixes some of the monotheistic Chinese concepts of Shang-di with later Chinese legends of the Jade Emperor that have been influenced by Buddhism, Taoism and Chinese folklore. Of course, America and Western Civilization has its own folklore about the God of the Bible. For example, the phrases “God helps those who help themselves” and “Christians are supposed to be non-judgmental” are aberrant teachings that are actually superstitious distortions of what the Bible actually says.

It should also be noted that some of the legendary Chinese depictions of the Monkey King are a watered down version of the story of Satan, who rebelled against God. In THE FORBIDDEN KINGDOM, however, the Jade War Lord is the satanic figure who rebels against the Jade Emperor in the Emperor’s absence.

THE FORBIDDEN KINGDOM treats these Chinese legends and myths as a subject for entertainment and fantasy. Thus, except for a couple oblique references to Buddhism, the movie is not an overt attempt to indoctrinate people into non-Christian belief systems, but to introduce them to kung fu legends as a source of entertainment. Nevertheless, caution and parental guidance are advised.

Rent or Buy THE FORBIDDEN KINGDOM: