"Do Men Make the Best Women?" 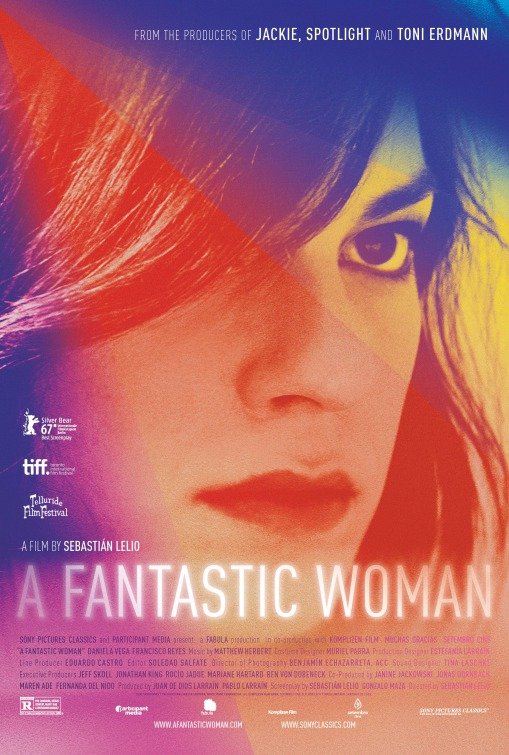 A FANTASTIC WOMAN is a drama from Chile. It’s a character study about a post-op transsexual man, a waitress who moonlights as a female nightclub singer, grieving due to the sudden death of his/her older male lover, Orlando. Daniel/Marina encounters hostility from Orlando’s family, especially Oliver’s son and ex-wife. Only Oliver’s politically correct brother is sympathetic. While grieving and trying to avoid upsetting the family further, Daniel/Marina begins to see Orlando’s silent ghost walking about some of the places he goes, including the crematorium. Will Daniel/Marina ever fight back against the family’s hostility toward him?

A FANTASTIC WOMAN is nicely shot and acted. However, it’s more of a character study, so there’s not much plot or jeopardy. The movie’s also a little too coy about the title character’s psychological, sexual identity. The role of Marina/Daniel is played by a real transsexual man, a professional singer calling himself Daniela Vega. A FANTASTIC WOMAN has some strong foul language and nudity and overtly promotes the ridiculous, sexist, nonsensical notion that men make the best women. It has an abhorrent humanist, politically correct worldview.

(HH, PCPCPC, HoHoHo, FeFeFe, CoCo, C, B, LL, V, S, NN, A, DD, M):
Dominant Worldview and Other Worldview Content/Elements:
Strong humanist, politically correct, pro-homosexual, radical feminist worldview with a Neo-Marxist postmodern view where reality and truth are somewhat ambiguous but movie definitely sides with the leftist transgender movement that falsely claims gender is fluid, with some light Christian references and some light moral elements;
Foul Language:
24 obscenities (including about 17 or 18 “f” words);
Violence:
Transsexual man is beaten up in one scene, character angrily jumps on the top of a car containing some hostile people, and sick man falls down small flight of stairs, gets a minor bloody wound on his head and later dies of an aneurysm at a hospital;
Sex:
Apparent male and female character kiss passionately with the female taking her blouse off at one point and implied fornication;
Nudity:
Upper “female” nudity of a post-op transsexual man with small but noticeable breasts in kissing scene, in scene of him lying naked on a bed and in a police examination where man holds his/her hands over crotch, and upper and rear male nudity at a spa with separate sections for men and women;
Alcohol Use:
Some alcohol use;
Smoking and/or Drug Use and Abuse:
Smoking and brief marijuana use; and,
Miscellaneous Immorality:
Hostility toward transsexual male from family members and police, including humiliating insults and a humiliating physical examination.

A FANTASTIC WOMAN is a drama from Chile about a post-op transsexual man in Santiago posing as a woman who’s grieving over the sudden death of her older male lover while trying to navigate the hostility coming from the dead man’s family, except for the man’s sympathetic brother. Though nicely photographed and acted, A FANTASTIC WOMAN is too coy by half, doesn’t have much real jeopardy, contains plenty of strong foul language and nudity, and overtly promotes the ridiculous, sexist, nonsensical notion that men make the best women. It also has a postmodern, deconstructionist, somewhat Neo-Marxist worldview where reality and truth are not fixed.

The movie opens with a 57-year-old man, Orlando, getting a steambath and a massage, then going to see his “girlfriend,” Marina, who sings during the evening at a nightclub while working as a waitress during the day. They go back to his apartment, where Marina has just moved in with Orlando. During the night, Orlando suddenly gets very ill and wakes up Marina. While he stands out in the hall, Marina goes back into the apartment to fetch Orlando’s car keys, and Orlando accidentally falls down a small flight of stairs.

They soon get to the hospital, but Orlando dies of an aneurysm. Soon, the police show up and begin to ask Marina some probing questions. It turns out that Marina is really a transsexual man, formerly named Daniel. The police are skeptical about Marina’s attachment to Orlando. A head wound he suffered during his fall down the stairs raises suspicions about his death and generates questions about whether Orlando ever beat Marina.

As Marina/Daniel undergoes more questioning by the police, he/she encounters hostility from Orlando’s family, especially Orlando’s son and ex-wife. They are disgusted by Orlando’s relationship with Marina/Daniel and hostile to the idea whether a man really can transform into a woman. Only Orlando’s politically correct brother is sympathetic toward Marina as he repeatedly insists that the other family members call Marina a woman. While grieving and trying to avoid upsetting the family further, Daniel/Marina begins to see Orlando’s silent ghost walking about some of the places he goes, including the crematorium.

By the end of A FANTASTIC WOMAN, the filmmakers clearly come down on the side that Daniel does indeed make a “fantastic woman.” In fact, the conceit of the movie is that, in reality, men can make better women than women, certainly a better woman than Orlando’s ex-wife, Sonia, or the female detective who hounds Marina wanting some answers.

The role of Marina/Daniel is played by a real transsexual man, a professional singer calling himself Daniela Vega. Vega has a high soprano type voice, so one assumes he has undergone genital surgery of some kind. The movie is coy about this. One shot shows Vega’s grieving character,

Marina/Daniel, lying naked on his bed. An over-the-shoulder shot shows him staring in a mirror at his female face while he holds the mirror above his crotch. In this shot, and other scenes and images in the movie, Director Sebastian Lelio, who co-wrote the screenplay, takes an ambiguous, postmodern view of reality and truth. Is Marina “a woman, a man or the sum of both?” Lelio asks in a director’s statement on his movie. Also, as he said in a recent interview, “The identity of the film itself fluctuates.” For example, the movie has elements of romance, a ghost story (Marina keeps seeing Orlando walking around after he died), a fantasy, a documentary, a story of humiliation and revenge, and a character study. This kind of multiplicity and ambiguity appears often in postmodern movies, literature and plays.

A FANTASTIC WOMAN is nicely shot and acted. However, it’s more of a character study, with a few symbolic fantasy scenes, so there’s not much plot or jeopardy. In one scene, however, after being treated shabbily by the family at his dead lover’s funeral, Daniel/Marina fights back and challenges them as they try to drive away in their car.

Despite its ambiguous postmodern attitude toward reality and truth, A FANTASTIC WOMAN is clearly made by people who support the transgender movement and LGBT activism. As such, it reflects the Neo-Marxist view of most postmodern pseudo-intellectuals, a view that opposes the objective, realist positions of Western Civilization. The movie also contains plenty of strong foul language, including a fair number of “f” words, and several scenes of explicit nudity.

There have been an increasing number of movies recently about transgender characters. Most of them seem to be about men posing as women. The reason for this would seem to be an attempt to attack male identity and masculinity from a radical feminist position. What’s really funny, and quite ironic, is that most of these movies, including A FANTASTIC WOMAN, also seem to contend that men make better women than women themselves! If that’s not sexist and anti-woman, what is?