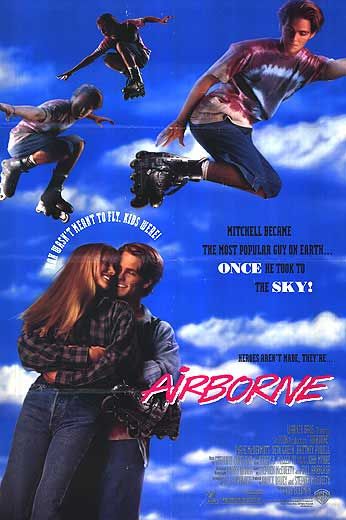 In AIRBORNE, Mitch Gooser must find ways of avoiding conflict and persuading his opponents that friendship is preferable to antagonism when the good-looking California surfer ends up in a Cincinnati high school. In the movie, brilliant rollerblading stunts and surfing images plus the promotion of non-violence are delightful but marred by mild violence, brief rear nudity, and references to New Age and Eastern thought.

(NA, PC, L, NN, V) A politically correct New Age worldview with: several New Age references; less than 5 obscenities & profanities; man knocked out in hockey games (twice); man thrown through window, numerous pranks; reference to male genitals, reference to Popeye and Olive Oil "in the sack," man pulls another man's pants down from behind; youth backs into a car and drives off; and, positive use of non-aggression as response to conflict & violence.

In AIRBORNE, Mitch Gooser is a California teenager whose life is surfing. When his parents go to Australia for research, Mitch gets to go–alas, not to Australia–but to a stark, wintery Cincinnati to live with his doting aunt and nerdy uncle. At school, Mitch’s strange-sounding talk, breezy California ways and total coolness make him a hit with the girls and a threat to guys, particularly some aggressive hockey players. The situation worsens when Mitch goes out with his chief opponent’s sister. Eventually, rollerblading and non-violence win Mitch’s acceptance in Cincinnati.

AIRBORNE is a fun and funny movie aimed at teenagers with brilliant rollerblading stunts and cresting ocean waves. There is some slapstick violence and very brief-rear male nudity. Its message to youth that non-violence is a mature way to handle conflict is a good one; however, the message comes dressed up in Eastern religion garb. Watch for references to Eastern religion and New Age thought.