ALIENS OF THE DEEP

"The Grandeur of Life in the Ocean Depths" 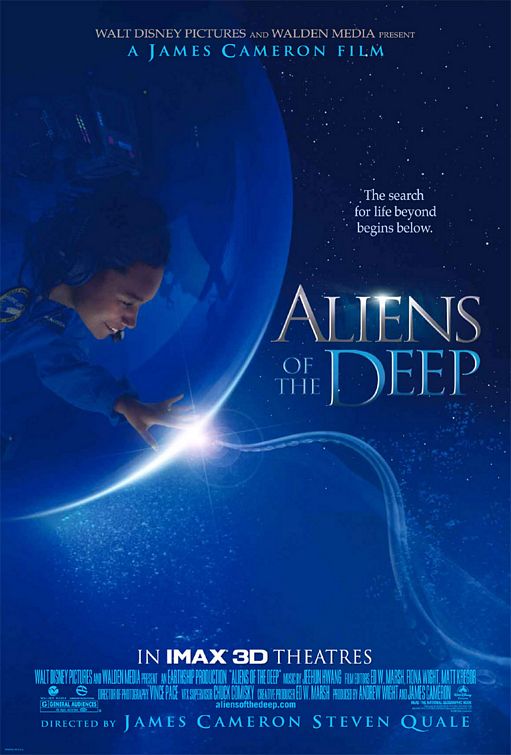 In ALIENS OF THE DEEP, Jim Cameron and NASA scientists are looking for life forms in the deepest oceans in the hope that they can find out whether other planetary bodies with extreme temperatures of hot and cold water could contain life. One of the astro-biologists hopes to find life on Europa, one of Jupiter’s moons. As the crew lands and begins exploring, they do, indeed, find incredible creatures like huge, amazing, translucent jellyfish, millions of tiny, white shrimp, and some very interesting but ugly squid-type creatures. The 3D IMAX effects make the fish even more real and brilliant.

This movie has a couple of questionable issues. A voiceover says, “Maybe the ancient Egyptians were right to worship the sun.” Also, the movie depicts a clear hope that aliens from other planets do exist. The filmmakers use some special effects at one point to portray their idea of what an alien kingdom might look like, and the entrance to the kingdom looks like and Indian totem pole. Overall, ALIENS OF THE DEEP is a delightful movie that will leave confirmed believers amazed at how God formed the darkest ocean depths.

(H, B, Pa) Light humanist worldview displays the amazing wonders of Creation, but God is not acknowledged, and movie extols science as the big answer, as well as some pagan content such as one reference to “maybe it’s right that the ancients worshipped the sun. . .,” and ending photos are special effects scenes of possible life on another planet with aliens and their Star Trek-looking kingdom, the entrance of which looks like a totem pole; and, nothing else objectionable.

Oh, the joy of a good 3-D IMAX movie! For those who haven’t had the sheer “take me away” thrill of the bigger-than-life, multi-dimensional movie experience, it’s not one to be missed. In recent years, MOVIEGUIDE® has reviewed other IMAX films like the reformatted BEAUTY AND THE BEAST, GHOSTS OF THE ABYSS and THE POLAR EXPRESS. Now, ALIENS OF THE DEEP brings the same incredible technology to the big, BIG screen.

Like GHOSTS OF THE ABYSS, the movie follows Jim Cameron, director of TITANIC, and several scientists (marine biologists and space explorers (specifically NASA astro-biologists, who study life on other planets)) into the depths of the ocean, miles and miles below sea level. As a matter of fact, the four submersibles take about 30 minutes just to make their descent!

The scientists are looking for life forms in areas that have never seen the sun in the hope that their findings will help them determine whether other planets could contain life that exists in a similar way to ocean bottom-dwellers. Their hypothesis is that life forms can exist in sunless areas that have heat generated by alternate heat sources such as volcanic steam, and that this type of ecosystem could possibly be replicated elsewhere. Specifically, one of the astro-biologists hopes to find life on Europa, one of Jupiter’s moons that hosts a similar situation where fire and ice come together.

As the crew lands and begins exploring, they do, indeed, find incredible creatures like huge, amazing, translucent jellyfish, millions of tiny, white shrimp, and some very interesting and ugly squid-type creatures. The 3D IMAX effects make the fish even more real and brilliant. One of the most amazing findings is the huge “chimneys” at the bottom of the ocean, fascinating blowtorches actually formed and fed by volcanic steam. Many of the shrimp live on the cones of the chimneys, enjoying the spot where the hot steam mixes with the frigid ocean water.

The temperature in the spot where the volcanic steam blows out of the chimney is 750 degrees Fahrenheit, which could melt the windows of the submersibles if they got too close. Yet, despite the danger to humans, the scientists continue to remark about how an entire ecosystem is not just living, but thriving in these pitch-black depths with their extreme temperatures.

ALIENS OF THE DEEP will likely inspire many young marine biologist hopefuls. It is brilliantly filmed with the incredible and complicated IMAX camera system, which appears to be increasingly improving with each film. Adults and children alike will enjoy the movie and likely spend hours pondering the mysteries of life in the black ocean depths.

As believers, there are a couple of questionable items that might lead to good family discussions about worldview issues. For instance, the movie starts out with some scenes from Egypt, where a voice over says, “Maybe the ancient Egyptians were right to worship the sun.” Also, throughout the movie, and especially at the end, there is a clear hope depicted that aliens from other planets do exist. The filmmakers use some special effects at one point to portray their idea of what an alien kingdom might look like. The entrance to the kingdom looks like an Indian totem pole.

Though the filmmakers obviously extol science and exploration as the focus of their amazement, believers that watch the film will surely be enraptured with the handiwork of their Creator that is so intricately and amazingly fashioned miles beneath our feet, an ecosystem upon which few eyes have ever been privileged to gaze.

Rent or Buy ALIENS OF THE DEEP: