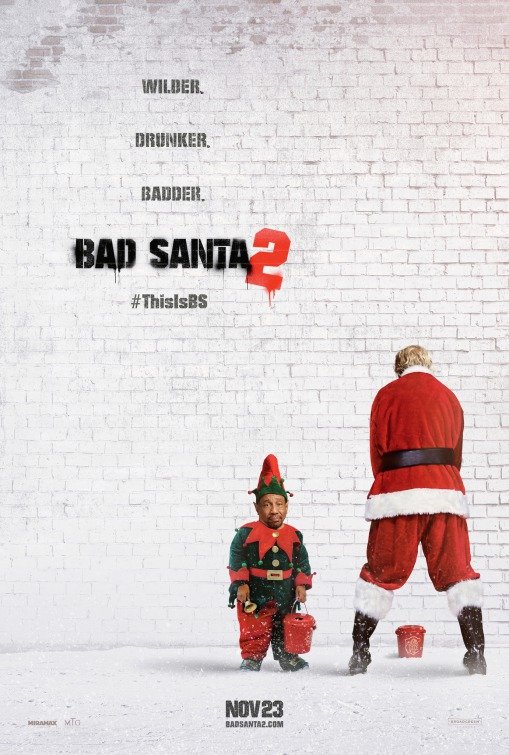 BAD SANTA 2 continues the vile misadventures of Willie Soke, an alcoholic thief who commits heists disguised as Santa. Willie hasn’t heard from his dwarf criminal sidekick Marcus in more than a decade. He still deals with the boy, Thurman, who’s now 21 but still endearingly naïve. As Willie tries to commit suicide and fails, he gets a letter from Marcus about a planned Chicago heist. However, Marcus doesn’t tell Willie they’re robbing a charity, and Willie’s vile estranged mother, Sunny, is involved. Thurman follows Willie to Chicago. This complicates things by once again making Willie feel guilty about his criminal behavior.

The first movie had more energy while being offensive. BAD SANTA 2 is just offensive. In fact, the new director seems to put the least possible effort to make the movie funny or involving. Meanwhile, Billy Bob Thornton as the title character looks bored, and Kathy Bates hits a career low as an utterly despicable person. BAD SANTA 2 mocks the holiday season, family, marriage, and Christmas itself, while barraging viewers with nonstop cruel insults, foul language and other perverse elements.

(PaPaPa, AbAb, C, B, Ho, LLL, VV, SSS, NNN, AAA, D, MMM) Very strong pagan worldview with some crude mockery of the Christmas season and Christianity (including protagonist mocks the Nativity, protagonist uses a life-size Nativity figure to beat up another Santa whom he falsely accuses of pedophilia, protagonist makes a crude sex joke out of the Catholic doctrine of the Immaculate Conception, and movie contains crude jokes about Santa Claus, Santa’s elves and children talking to Santa), but mixed with light Christian, moral content during a rendition of “Silent Night” that motivates the thief hero to return stolen loot, plus some crude jokes about homosexuality; at least 245 obscenities (more than 150 “f” words) and 25 mostly strong profanities, plus other graphic language, drunken protagonist vomits in an alley, and boy urinates on protagonist’s knee while protagonist is playing Santa Claus; strong and light comic violence includes protagonist tries to commit suicide two different ways and is unsuccessful, a couple of shootings as bumbling robbers shoot each other, a woman shoots at cops, but no police are hit, a couple of fistfights and chokings played for laughs, and protagonist punches his tough mother, who’s an even worse person than him, and who doesn’t flinch; at least three graphic yet clothed fornication scenes (including one involving a married woman who wants revenge against her cheating husband), descriptions of other sex acts, protagonist tries to “help” 21-year-old protégé lose his virginity by hiring a prostitute, but the young man runs away without engaging in any explicit sexual behavior, disgusting references to sodomy, verbal references to oral sex and homosexuality, man playing Santa falsely accuses another Santa of pedophilia, and man has a traffic accident while leering at a woman breastfeeding her baby; final moments before the closing credits feature several Instagram photos of the main character rubbing his testicles against his heist partner’s face while the partner is helplessly trapped in a hospital bed, a shot of rear male nudity, and multiple images of female cleavage; much alcohol abuse, protagonist gets drunk and passes out, protagonist is an alcoholic; smoking but no drugs; and, protagonist and two other characters plan to rob a charity but the protagonist starts feeling guilty and tries to stop it but they are arrested, vile protagonist and his vile mother exchange hate-filled insults, and many cruel insults in public against random passersby and especially against children speaking to Santa.

BAD SANTA 2 continues the vile misadventures of Willie Soke, an alcoholic thief who commits heists in disguise as Santa, this time with his even more vile mother along for the ride and his other main sidekicks from the first movie. BAD SANTA 2 mocks the holiday season, family, marriage, and Christmas itself, while barraging viewers with nonstop cruel insults, foul language and other perverse elements.

In the new movie, Willie (Billy Bob Thornton) hurriedly narrates the circumstances of the first movie. He reveals he hasn’t heard from his dwarf criminal sidekick, Marcus Skidmore (Tony Cox), in more than a decade. He still constantly deals with the boy who followed him around the first movie, Thurman Murman (Brett Kelly), who’s now 21 and still cluelessly but endearingly naïve about the world.

As Willie tries to commit suicide and fails, Thurman enters with an envelope containing $2,000 cash and says there’s a note for Willie. Marcus has written him, asking him to engage in a new heist in Chicago. However, he doesn’t tell Willie they are about to rob a children’s charity and that Willie’s vile estranged mom Sunny (Kathy Bates) is involved as well.

Willie agrees to do the robbery solely for the money and only if Marcus agrees to cheat Sunny out of her cut of the money. The plan involves Willie relying on sleeping with the charity head’s wife (Christina Hendricks) to get access to the building for the robbery, which will take place during the charity’s annual Christmas concert.

When Thurman follows Willie to Chicago, however, he complicates things by once again making Willie feel guilty about his criminal behavior and have a slight change of heart. Thus, the heist becomes more complicated as everyone but Thurman engages in vile behavior.

BAD SANTA 2 follows its predecessor in taking the lowest possible road to holiday humor, relying on nonstop raunchy references and foul language to get laughs. The first movie had much more energy to it, due to the newness of the concept, but it was still highly offensive.

This sequel is merely offensive. In fact, the new director, Mark Waters, often feels like he’s putting in the least possible effort to make the movie funny or involving. Meanwhile, Billy Bob Thornton as the title character looks bored, and Kathy Bates hits a career low as an utterly despicable person.

Mocking the holiday season, family, marriage, and Christmas itself, while barraging viewers with nonstop cruel insults, BAD SANTA 2 is a must to avoid for all moviegoers.