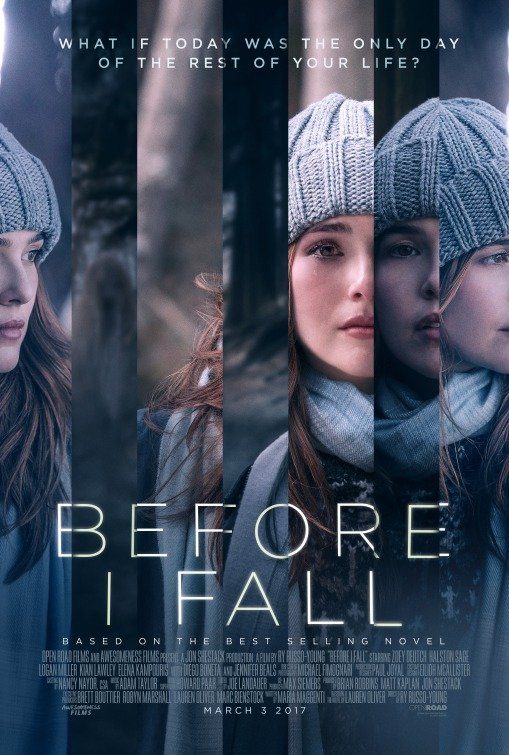 In BEFORE I FALL, high school senior, Sam, wakes up on February 12, Cupid Day at school. In school, her friends tease her about planning to lose her virginity that night to her boyfriend, Rob. At lunch, Sam and her friends make fun of various students, especially a poor girl named Juliet. That night they attend a party. Rob shows up drunk and starts flirting with other girls while Juliet is chased away. When the girls drive home, they hit an oncoming truck and die instantly. The next morning, Sam wakes up repeating the same day. Sam must find a way to stop the cycle by doing something good.

Though it’s a teenage rehash of GROUNDHOG DAY, BEFORE I FALL is more a suspense drama than a comedy. It’s more serious and introspective. The filmmakers do a good job making re-living the same day seem interesting. The overall message is moral and redemptive, culminating in laying down one’s life for one’s friends. Morality triumphs, but BEFORE I FALL still contains a lot of immoral behavior by teenagers. So, MOVIEGUIDE® advises extreme caution.

(BB, C, FR, Pa, H, HoHo, LLL, VV, S, N, AA, MM) Strong moral worldview with light redemptive elements stresses being selfless and laying down one’s life for their friends, promotes moral values like kindness and goodness, but the main character dies and comes back to life living the same day again and again (which is a kind of nominalism and reincarnation, and therefore not consistent with biblical teaching), plus there’s a lot of immoral behavior by various characters, and one character is a lesbian and featured heavily in one scene; 35 obscenities (including one or two “f” words) and four profanities (including at least one GD), plus a brief discussion about a girl getting her period, vomiting from alcohol is mentioned a couple times, and the words “dyke” and “slut” are used; strong violence includes a violent car crash is depicted multiple times, a girl is seen being hit by a speeding car, two girls fight at a party, and people start throwing their drinks on one of them, and a girl commits suicide; sexual content involving teenagers includes some groping at a party, fornication and losing one’s virginity are discussed in several scenes, one scene depicts two teenagers initiating sex, and a condom is handed out; a boy takes his shirt off in bed about to fornicate, teenage girls are shown in their bras, and a girl briefly exposes her underwear under her dress as she goofs around with her friends; several scenes depict a teen party where young people are drinking and getting drunk; no smoking or drugs; and, strong miscellaneous immorality includes bullying, some girls verbally abuse other students in the school and talk trash about them behind their backs, a girl isn’t very nice to her family members, a girl defies her parents and disobeys their rules, a girl is rude to her teacher and her friends, and a boyfriend disrespects his girlfriend.

In BEFORE I FALL, high school senior, Samantha, wakes up on February 12 to a text from her best friend, Lindsay. They’re both excited that it’s Cupid Day at school, a day when students hand out roses to their romantic interests. They are especially excited because Sam and her boyfriend, Rob, plan to sleep together for the first time that night. Sam brushes off her family as she leaves for school that morning and tolerates some gentle ribbing by her friends when they discuss her “big night” with Rob.

At school, Sam and her friends sit together at lunch. Their favorite pastime is talking trash about the people they don’t like and making fun of the social outcasts. One particular poor girl, Juliet, is the object of their ridicule. She was once best friends with Lindsay, but has since turned into what the girls call a “psycho.” Juliet doesn’t have any friends and sits by herself in the cafeteria. Though Sam goes along with her friends, it’s obvious that underneath she feels a little guilty about their behavior.

Later that day, Sam gets a dozen roses from Rob, and an unexpected one from a boy named Kent. It becomes apparent that Sam and Kent used to hang out in the third grade, but grew apart as they got older. Kent invites her to a party at his house that night, which Sam and her friends decide to attend. There’s a lot of drinking, and Rob ends up blowing it with Sam when she catches him drunk and flirting with other girls.

Out of the blue, Juliet shows up and gets into a fight with Lindsay, who ends up chasing her away. Sam is clearly rattled by the night’s events and suggests they all leave. As Lindsay drives everyone home, she gets distracted and crashes into an oncoming truck. Everyone dies instantly.

The next thing Sam knows, she’s back in bed, waking up on February 12, looking at a text message from Lindsay – just like yesterday. Sam proceeds to freak out and tries to wrap her head around what’s happening. Remarkably, things play out identically to the way they did before. However, Sam realizes she has the ability to change things so that they have a different outcome. That night, she makes sure they miss the truck on the way home from the party, but it’s only a few seconds later that they hit something else. . . and she’s back in her room waking up on February 12 again. It becomes clear that in order for the cycle to stop, Sam has to do something good and change the course of events forever.

Many may criticize this movie for being a rehash of GROUNDHOG DAY (the highly acclaimed 1993 comedy with Bill Murray) marketed for teenagers. To be fair, though the plots are nearly identical, the endings are not. Also, BEFORE I FALL carries more dramatic weight to it, and has a tone closer to suspense than comedy. The filmmakers do an excellent job of making re-living the same day interesting and new. Things are never quite the same, and the relationships between the characters keep changing. The only truly awkward moment comes when Sam transitions from panicking over her new situation to suddenly feeling emboldened to take on the challenge. Instead of easing into it, she just shrugs her shoulders and accepts her new reality. It only takes her a day to figure out what’s happening and come up with a philosophical explanation.

Behind the movie is a positive moral, redemptive message. It brings attention to the little moments in life where decisions are made for good or bad, and shows the relation to those decisions and their consequences. The central theme is a moral one, promoting goodness, honesty, love, kindness, and sacrifice. However, that theme is surrounded by lots of immoral actions such as underage drinking, teenage promiscuity and foul language. The ridicule that Lindsay tosses Juliet’s way is vicious but it’s something Sam works to remedy. The most powerful message of all is the willingness to lay down one’s life for one’s friends, and the unselfishness that this requires. Though the ultimate messages are positive and good wins in the end, MOVIEGUIDE® advises extreme caution based on the amount of foul language, teenage drinking and immoral behavior in BEFORE I FALL.