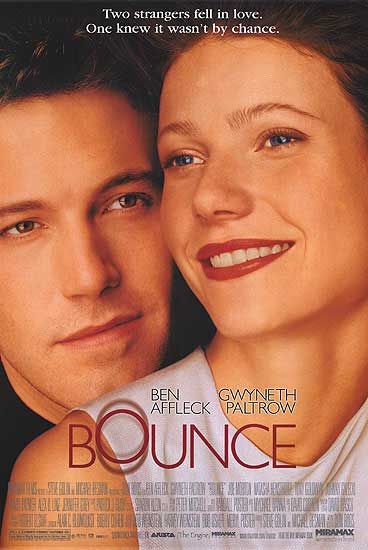 In BOUNCE, Ben Affleck plays an advertising salesman named Buddy who gives his plane ticket to a young father of two boys. When the plane crashes, Buddy becomes overcome with guilt and starts drinking heavily. A year later, Buddy comes out of rehab, but he still can’t shake his guilt. He looks up the young father’s wife, Abby, played by Gwyneth Paltrow, and helps her sell some real estate to his company. Buddy and Abby fall in love, but the truth about the ticket finally comes out, leading to an elaborate but poignant emotional conclusion.

BOUNCE is a provocative romantic melodrama starring Ben Affleck and Gwenyth Paltrow. The movie asks the question, How do you bounce back from a personal tragedy? As such, it provides some mildly moral answers to coping with the guilt that’s often associated with grief. The end result is a flawed little gem that contains some objectionable content, including strong foul language and some brief sexual content. Although at one point Buddy rejects the God-centered program of Alcoholics Anonymous, saying he does not believe in God, at the end of the movie he invites a friend to go to an AA meeting

(B, Pa, H, Ho, LL, S, NN, AA, D, MM) Mild moral worlview about overcoming personal tragedy & guilt associated with grief, including man finally embraces the God-centered program in Alcoholics Anonymous, plus pagan & humanist attitudes & beliefs (some of which seem to be rebuked) & a minor but significant character says he’s homosexual; 13 obscenities (including one “f” word), 6 strong profanities & 5 mild profanities; mild violence such as animated images on a computer screen of a plane crash-landing & fiery images of a real plane crash after impact; implied fornication in two scenes plus couple in bed kissing & embracing in one scene; upper male nudity & implied female nudity in bed; alcohol use, drunkenness & man must go to alcohol rehab; smoking; and, miscellaneous immorality, such as movie sometimes treats lying too lightly, which undercuts the morality of the movie’s resolution.

BOUNCE is a provocative romantic melodrama starring Ben Affleck and Gwenyth Paltrow. The movie asks the question, How do you bounce back from a personal tragedy? As such, it provides some answers to coping with the overwhelming guilt that’s often associated with grief. The end result is a flawed little gem that contains some objectionable content, including strong foul language and some brief sexual content.

Affleck plays Buddy Amaral, an ad salesman who has just landed a nice contract in Chicago with an airline firm. Buddy gives his return ticket back to Los Angeles to a young married man who wants to hurry home to help one of his young sons sell Christmas trees, apparently for his school or scouting group. Buddy’s motives are not completely altruistic, however. He gives away his ticket so he can fornicate with a pretty blonde woman he’s met while waiting for his delayed flight. Of course, when the plane crashes, killing the young father, Buddy becomes so overcome with guilt that he starts drinking heavily. Eventually, he makes a fool of himself at an award banquet and passes out drunk on the floor.

A year later, Buddy comes out of rehab, but still can’t shake his feelings of guilt. He spies on the young father’s widow, Abby, played by Gwyneth Paltrow. Abby is working as a real estate agent while she awaits the settlement from the airline company. Buddy helps her sell a large office building to his firm. He and Abby eventually fall in love, but Buddy does not tell Abby the truth about why her husband was on that plane. Complications ensue and the truth finally comes out, leading to an elaborate but poignant emotional conclusion.

BOUNCE is an engrossing melodrama that should hold the interest of the average moviegoer. The romance between Buddy and Abby is credible, partly because the movie plays it in a level-headed, realistic manner. The emotional scenes are not overwrought and seem quite natural, even though the movie is clearly a romantic melodrama designed to attract a popular audience. The fact that the movie is a low-key melodrama may be part of its charm. Enhancing that charm are the likable personalities of the two romantic leads, Affleck and Paltrow. Even when they do wrong things, many viewers will still want to root for them.

First, the movie includes a fair amount of strong foul language, including one “f” word and some strong profanities. Secondly, the movie indicates when viewers first meet him that Affleck’s character Buddy is a sexual lothario. Thus, he sleeps with the woman he meets in the airport, and, eventually, he sleeps one time with Abby, though by that time, he’s firmly in love with her. Thirdly, the two main characters, especially Buddy, spend too much time lying to other people. This undercuts the morality of the movie’s resolution.

Fourthly, Buddy’s new office assistant when he returns from rehab announces that he’s homosexual. Although this character is the stereotypical sensitive homosexual person, the movie does not use the character to make some kind of big political statement or to offend viewers with the more sordid aspects of the “homosexual lifestyle.”

Finally, neither Buddy nor Abby deal with their grief by seeking solace in the Bible, from God or from some Jewish or Christian religious leader. In fact, at one point, Buddy rejects the God-centered program of Alcoholics Anonymous, saying that he does not believe in God. At the end of the movie, however, after Buddy seems to have worked through most of his guilt, he invites another ex-alcoholic friend to an AA meeting, indicating that he is now ready to believe in the “higher power” of God.

It is this final invitation and the movie’s theme of learning to live with grief and guilt that gives BOUNCE its mild moral worldview. A key aspect of this worldview is the fact that it is the truth that finally helps Buddy and Abby transcend their grief and feelings of guilt. Not just the truths about the plane ticket and Buddy’s selfish motive for giving it to Abby’s husband, but also the truth that neither he nor Abby is responsible for the plane crash or for the desire of Abby’s husband to hurry home to his family. As they say, hindsight is 20-20, and there are some things you just can’t change, no matter how hard you wish. The good news, however, is that we don’t have to bear these truths alone, for God is always with us, ready to comfort us, if only we will let Him.