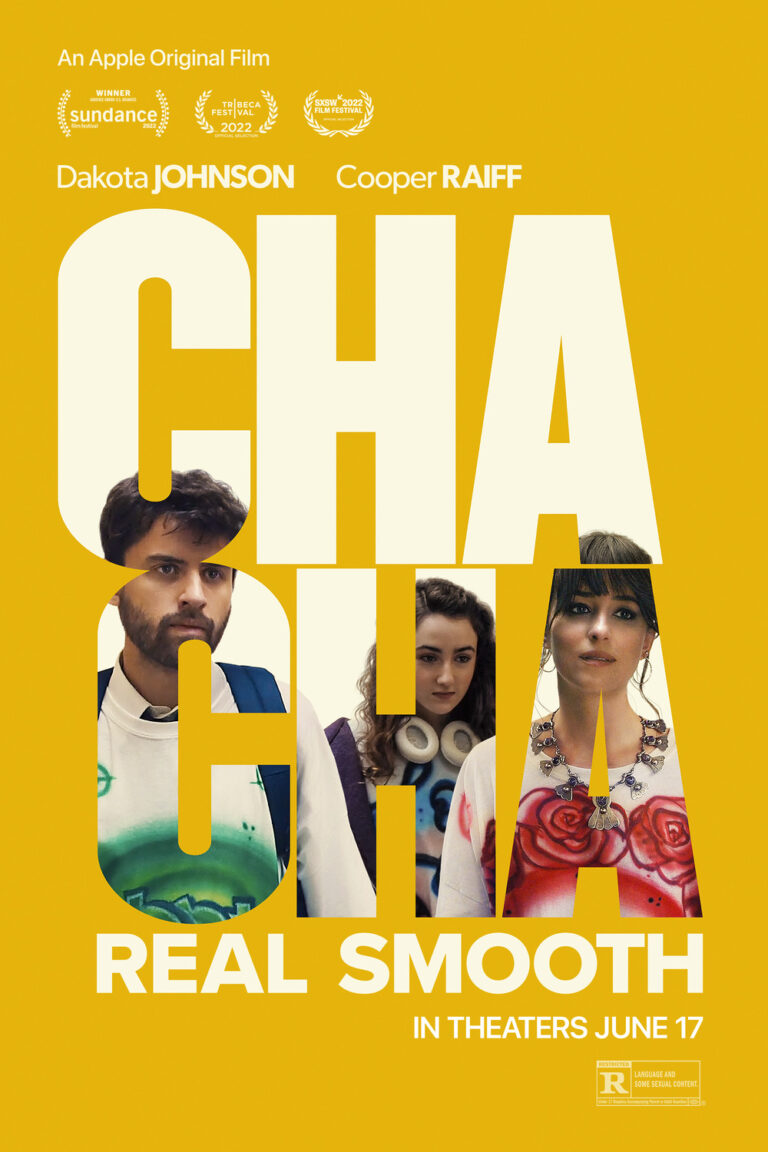 CHA CHA REAL SMOOTH is a comedy on Apple TV Plus about a college graduate who has no plans for the future. Andrew wants to follow his girlfriend to Spain, so he gets a job as a party starter at Jewish bar mitzvahs. At one event, he meets Domino, a pretty older woman with an autistic teenage daughter, Lola. Andrew helps draw Lola out of her shell, so Domino hires him to babysit Lola. Andrew and Domino become close, but she’s engaged to a man more her age and doesn’t want to break off the engagement. Eventually, this causes Andrew to take stock of his life and think seriously about his future.

CHA CHA REAL SMOOTH has some funny, heartwarming moments, but the plot moves slowly, and the dialogue is sometimes boring. It has a Romantic worldview about chasing your dreams and focusing on romantic love. This is mitigated by some moral elements stressing compassion, family and finding purpose. Sadly, CHA CHA REAL SMOOTH has about 20 “f” words, two strong profanities, some drunkenness, and a gratuitous bedroom scene. So, MOVIEGUIDE® advises extreme caution.

(Ro, B, Ho, LLL, VV, SS, AA, MM)
Dominant Worldview and Other Worldview Content/Elements:
Light Romantic worldview overall about chasing after your dreams, seeing romantic love as the ultimate ideal and characters are sometimes focused on themselves rather than other people, but mitigated by some moral elements stress compassion and family, and lead to a positive ending where characters, including two mothers, show concern for taking care of their children and their needs, some references to Jewish culture and belief, and the lead male character helps his mother and his younger brother, helps to bring an autistic child out of her shell and decides to help teach special needs children, but he’s not particularly religious despite working at Jewish bar mitzvahs and bat mitzvahs, plus man tells his younger brother teenagers should wait until they’re older to decide whether they’re homosexual
Foul Language:
At least 31 obscenities (including about 20 “f” words), one Jesus profanity, one GD profanity, nine light profanities, two men use urinals, and some brief lewd language
Violence:
Strong violence when a woman has a miscarriage in the bathroom (with some blood shown), plus some light violence such as one scene of two adults getting into a fight, some glass accidentally cuts a man’s arm, man takes a swing at another man and unintentionally gives his mother a black eye instead, and a man knocks a bully unconscious
Sex:
A scene of depicted fornication, plus man and woman kiss and make out, but woman is engaged to another man and decides to go through with her marriage, and references to divorced people
Nudity:
No nudity
Alcohol Use:
Several scenes of drinking and some drunkenness, including young man decides he’s too drunk to drive, so he stops his car and calls his mother to pick him up
Smoking and/or Drug Use and Abuse:
No smoking or drug use; and,
Miscellaneous Immorality:
People bully autistic teenager and other schoolchildren, gossip, lying, and references to men abandoning two side female characters and their children.

CHA CHAREAL SMOOTH is a comedy on Apple TV Plus about an under-employed college graduate who works as a Bar Mitzvah party host and strikes up a friendship with a mother and her autistic teenage daughter. CHA CHA REAL SMOOTH is funny and heartwarming in places, but it moves too slowly, the dialogue drags in places and there’s about 20 “f” words, two strong profanities, some drunkenness, and a gratuitous bedroom scene. So, extreme caution is advised.

The movie stars Cooper Raiff as the college graduate, Andrew. (Raiff also wrote and directed the movie.) Andrew has a girlfriend, Maya, and wants to follow her to Spain. However, he has a dead-end job at a fast-food restaurant in a mall while caring for his mom who’s struggling with bi-polar mental health issues.

Andrew escorts his brother to a Jewish bar mitzvah and meets Domino, the mother of an autistic teenager named Lola. After a great night, where he helps bring Lola out of her shell, he gets hired to be a “party starter,” who’s responsible for making sure everyone has a good time at a party. He wants the job so he can have enough money to go to Maya to Spain. However, Lola wants him to become her new sitter. When Andrew gets to know Lola’s mother, Domino, those plans begin to change. However, Domino informs Andrew she’s engaged and unwilling to break off her engagement.

While defending Lola at a party, Andrew is asked to leave, but he finds out Domino has had a miscarriage in the bathroom. Andrew helps her to her car and keeps her tarnished reputation intact – for now.

Domino, rumored to have slept with several people at the school, isn’t the favorite of many parents. Andrew and Domino’s feelings about being an outcast lead them to form a bond. They become closer, but Joseph, Domino’s fiancée, wants to break them apart, So, he tells Andrew he can’t be Lola’s sitter anymore.

[SPOILERS FOLLOW] Andrew tells Domino he loves her and doesn’t want her to get married. However, she says he’s too young for her and doesn’t want to pursue a relationship with him. Although he’s rejected, he channels his care for Lola and Domino into working as a mentor for special needs teenagers. He moves out of his mother’s home and chooses not to go to Spain but live life with a newfound independence.

CHA CHA REAL SMOOTH has a coming of age feel to it. The audience watches as Andrew blossoms from a young man who has no plans and no love life to someone who becomes more self-assured and finds purpose to his life.

The cinematography is simple. Often shot with single camera angles and sometimes dark lighting, the use of lights and cameras is not the highlight of the movie. The plot is also a bit slow moving. It can leave the audience bored and ready for the plot to move forward. The dialogue also sometimes drags in parts. Andrew treats Lola like an adult rather than a child, which is a positive element for the movie. However, the dialogue between them sometimes sounds robotic rather than engaging.

The movie’s worldview is Romantic as its main theme is to chase after your dreams, but there is some moral content stressing compassion, family and helping other people, including people in need. This eventually leads to a relatively positive ending.

However, CHA CHA REAL SMOOTH has about 30 “f” words, two strong profanities, a sex scene, and other lewd references. Also, a woman has a bloody miscarriage in a bathroom. Finally, CHA CHA has some drunkenness and a fight scene. So, MOVIEGUIDE® advises extreme caution.