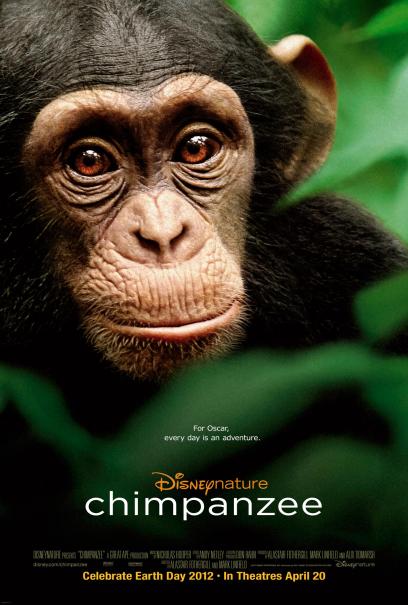 Filmed in the jungles of Africa, CHIMPANZEE follows an adorable baby chimp named Oscar. Oscar learns daily from his mother until a rival chimpanzee family threatens their survival. Oscar’s mother teaches him how to use a rock to break open a nut’s shell. Then, Oscar’s group goes into a rival group’s territory to get some lush fruit. They fail, but the rival group stages a surprise attack. Oscar’s mother protects him, but she dies in the process. Oscar still needs an adult chimpanzee’s help, but his group’s other females reject him. Then, help comes for Oscar from an unlikely source.

CHIMPANZEE is an entertaining documentary. It keeps viewers engaged and focused throughout. Beautiful scenes of the African forests and close-ups of the adorable baby chimp make the film even more enjoyable. Although there are no references to God, the movie shows the beauty of newborn life, along with the importance of family and motherly attention. Thus, overall, CHIMPANZEE reflects a strong moral worldview with positive redemptive elements. Some of the chimp fighting may be too intense for very young children, but CHIMPANZEE is one of the better nature documentaries.

(BBB, C, V) Very strong moral worldview with some redemptive elements of sacrifice includes mother chimpanzee cares for and sacrifices for her baby, main chimpanzee becomes a savior to the youngest chimpanzee of the group who has no mother, and movie shows the importance of parents and family, stressing that the young learn from their parents and need them to teach and support them; no foul language; violence between the chimpanzees which may get scary for young children; no sexual content; no nudity; no alcohol use; no smoking or drug use; and nothing else objectionable.

Filmed in the jungles of Africa, CHIMPANZEE immerses viewers in an entertaining documentary that shows the beauty of family and Creation. Oscar is an adorable baby chimpanzee who has a loving mother, until Oscar and his chimpanzee family are threatened by rival chimpanzees.

Oscar is a baby chimpanzee who follows his mother everywhere she goes. Seeing what she does, he learns a great deal about how to survive in the jungles of Africa. Oscar is one of the youngest of his chimpanzee gang, so he’s not a favorite with the group, but he is a favorite with his mother. Following the steps of mom, Oscar learns how to crack nuts so he can eat. This involves taking a large rock and hitting the nut’s hard shell.

Oscar and the whole chimpanzee community also need fruit. So, they they leave their safe ground and go into another rival chimpanzee group’s territory to get the lush food. The rival group is fierce, however. Tension is thick as Oscar’s community moves forward toward the fruit. Hearing Oscar’s group, the rival chimps chase after them and push them far from the fruit. Leading the group is Scar, a large chimpanzee who controls his group to fight Oscar’s. Oscar’s group has a leader too, Freddy, who is wise and the hunter for the whole group. Surprisingly, the chimpanzees strategically hunt for small monkeys for their meat intake.

The rival group comes and attacks Oscar’s family. His mother is hurt. Removed from the group and beaten, Oscar’s kind mother dies. On his own now, Oscar still has to learn more survival skills, because he is still young and in need of a mother to teach him the ways to live. Knowing this, Oscar goes around to the female chimpanzees in the group. They push him away, tending to their own. In an unexpected turn, Oscar’s “savior” is the least expected one out of the group, with the highest ranked chimpanzee tending to the lowest ranked chimpanzee, Oscar.

CHIMPANZEE is an entertaining documentary that keeps the audience engaged and focused throughout. Beautiful scenes of the forests of Africa and up close shots of the adorable chimpanzee Oscar make the film aesthetically enjoyable to watch. Although there are no references to God, it shows how complex nature is. It also shows the beauty of newborn life, along with the importance of family and motherly attention. Thus, overall, CHIMPANZEE reflects a strong moral worldview with positive redemptive elements. Happily, CHIMPANZEE contains no radical environmentalist ideology. Some of the chimp fighting may be too intense for very young children, but CHIMPANZEE is one of the better nature documentaries celebrating Earth Day.