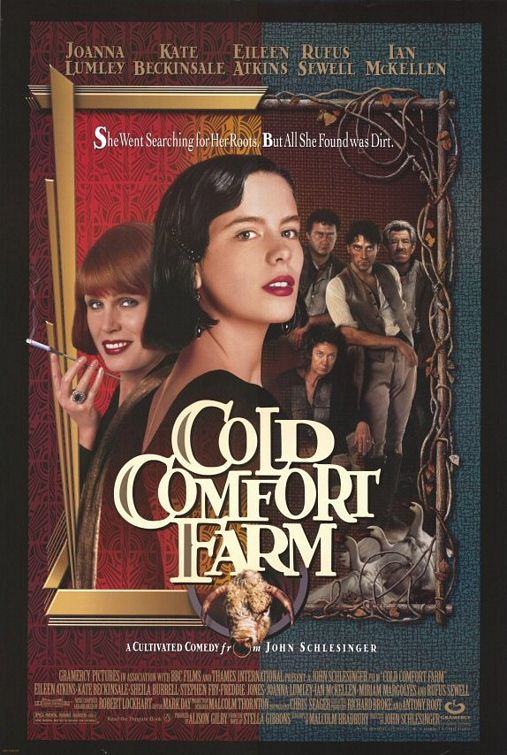 An orphaned sophisticate finds her new home out in the rural pastures at COLD COMFORT FARM. She changes the appalling state of the farm and the lives of the people who live on it for the better. This film is as warm-hearted and good-natured as its heroine, crowned with wit, brilliance, morality, and positive references to Christianity, although it includes some talk of promiscuous sex, childbirth out of wedlock, sexual innuendoes, and the comic exaggeration of a preacher obsessed with the wages of sin.

COLD COMFORT FARM throws new and wonderful light on the plight of living with relatives. Flora goes to live at Cold Comfort Farm. With a penchant for tidying up messy situations and lives, she goes about changing the lives on the farm. Armed with Vogue and travel catalogues, she encourages the inhabitants of COLD COMFORT FARM to pursue their individual ambitions: from a full-time evangelist to a movie star. In time, she also persuades the old matriarch of the house, heard but hardly seen, to leave her cobwebbed life and room to take on a more glamorous existence.

This film is as good-natured as is its heroine Flora. It is relentless with wicked wit and cunning caricatures. A couple of cautionary notes include the presence of implied promiscuous sex, out-of-wedlock births, sexual innuendoes, and the comic exaggeration of a preacher obsessed with the wages of sin. However, there are strong moral qualities such as positive references to Christianity, honoring the family and a overwhelming sense of kindliness from relatives. This movie makes even the most dishevelled farmhands lovable and shows literary wit can be farmed from the soggy soils of the English rural landscapes.

Writer: Malcom Bradbury BASED ON A NOVEL BY: Stella Gibbons