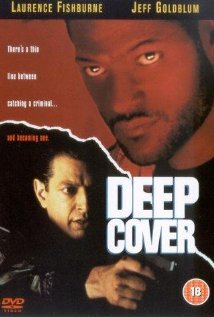 As a ten-year-old boy, Russell Stevens Jr. witnessed his junkie father being gunned down in an attempt to rob a liquor store. Now a policeman on special undercover assignment, Stevens is forced to become like the very men he is trying to apprehend; a ruthless, murderous drug pusher. The obvious, although convoluted, moral message of this movie is obscured by its pervasive foul language and graphic violence.

(LLL, A/D, M, SS, VVV, Ab, C) 50 obscenities, 5 profanities, & lewd rhymes, conversations and remarks; extensive use of cocaine; brief fornication, implied adultery & stripper performs in nun's habit; man stabbed in chest with fork, man beaten slowly to death with pool cue, drug dealer urinates on man's feet, man killed by moving vehicle with shocking clarity, & numerous graphic shootings, beatings and other acts of violence; and, DEA agent compares himself with God (in jest); however, there is the portrayal of a courageous Christian character, though the portrait is slightly inaccurate in its understanding of the Good News.

In DEEP COVER, Russell Stevens Jr., a policeman, is selected by DEA agent Jerry Carver to infiltrate drug supplier Felix Barbosa’s gang to get to Barbosa’s boss, Diagos, who is under his uncle, Latin American diplomat Hector Guzman. Taking the name John Q. Hull, Stevens becomes a ruthless drug pusher. Hull is called to sell drugs to young people and pregnant women, and murder his rivals. When Carver refuses to apprehend Diagos and Guzman because of political factors, Hull takes matters into his own hands. After Carver orders him off the assignment, Hull rejects his badge and throws his effort behind his drug dealing.

The point of this movie is the irony of an undercover policeman pushing drugs to catch drug dealers. However, all this happens at the cost of Hull’s conscience. The film’s lone recognition of God is in the character of “Reverend,” a Christian policeman who is a positive, courageous character, but, regrettably, presents an inaccurate portrait of what true Christian beliefs are. The film’s excessive violence and pervasive foul language obscure the obvious, though convoluted, moral message. Trying to be hard and uncompromising, DEEP COVER is instead despairing and hopeless.