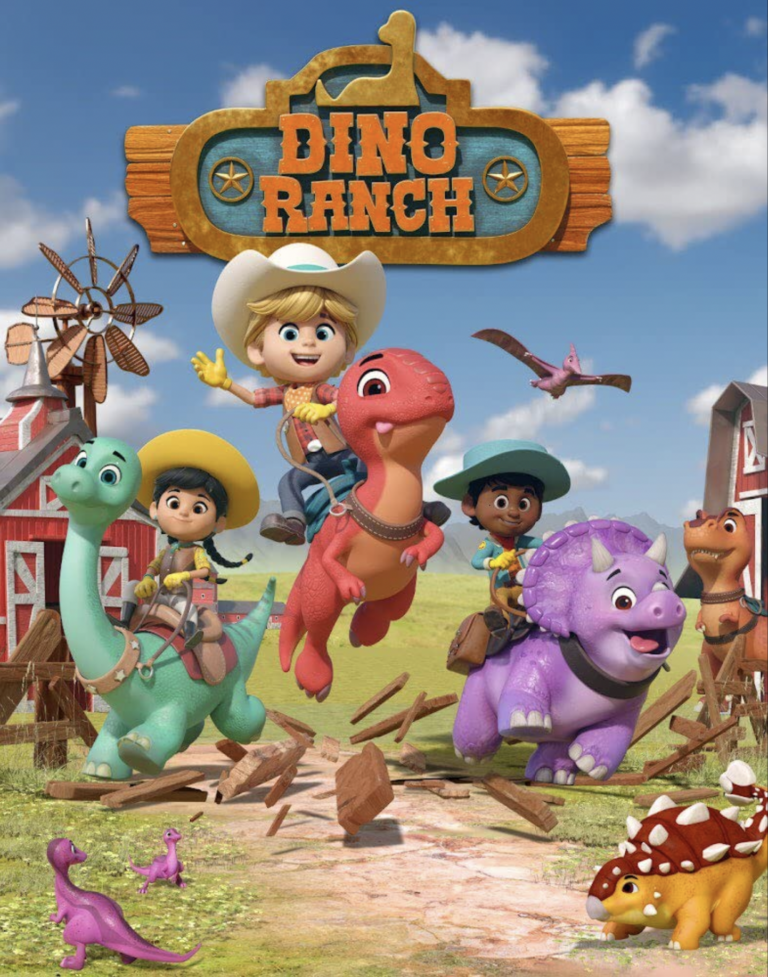 DINO RANCH is an animated series on Disney Plus. It follows three young aspiring Junior Dino

Ranchers and their adoptive parents as they go on adventures chasing, taming and helping

dinosaurs on the family ranch. They learn to work together as a team, admit to their faults, and

listen to each other, all for the betterment of the team and ranch. MOVIEGUIDE® reviewed the

first three episodes and first six stories of DINO RANCH. In one story, they tame a wild

dinosaur. In another, they help a sick dinosaur. The other stories involve showing gratitude to a

teammate and helping another retrieve an invention.

episodes have a strong moral worldview teaching valuable lessons. For example, the children

learn to work together, express kindness, love and gratitude, and learn to listen to their parents

and admit when they’re wrong. Sometimes, there are Romantic themes about following your

dreams or believing in yourself. DINO RANCH has some light, Western style action sequences.

Content/Elements: Strong moral worldview of showing kindness and love regardless of what

DINO RANCH is an animated series about three children who learn what it takes to be a Dino Rancher. Streaming on Disney+, the program follows Jon, Miguel and Min as they cooperate with each other to tame the dinosaurs around them and follow in the footsteps of their Ma and Pa. MOVIEGUIDE® reviewed the first three episodes of the first season.

The series is episodic, with each episode having its own contained story, with no references or callbacks to previous episodes. In fact, each episode has two stories contained in them, with a run time of 11 minutes each story.

The first episode follows as Jon struggles to tame a dinosaur all by himself after being asked to by Pa. The dinosaur is all playful and bumps into other dinosaurs, without realizing that it can accidently upset them. Meanwhile, Jon learns the power of working together with the others. The second story in the first episode follows Min as she struggles to find a “Moonlight flower” to help cure a dinosaur’s illness.

The first story in the second episode is about Miguel chasing after a dinosaur who has mud stuck in his eyes. He gets frustrated because Jon wants to rush into things without a plan. Eventually, Miguel helps Jon calm down and learn to think things through better. The second story follows a campfire story about a scary “Spookasaurus,” with the three children admitting to being brave as they frolic in the night.

The third episode continues with the two-story structure. The first story is about the three children trying to find the perfect gift for Ma to show their gratitude. The second story tells about the three chasing Miguel’s invention after Miguel tries to help a baby Pterodactyl.

Each episode of DINO RANCH focuses on one main theme and centers around each of the Junior Dino Ranchers learning valuable lessons. Sometimes the children’s adoptive parents are present, but often, the program focuses on the children themselves. The program not only shows their struggles learning to cooperate with themselves, but also their inner struggles too. The first three episodes of DINO RANCH have a strong moral worldview of working together and learning to slow down and plan things out better. The programs also teach learning to trust in others, listening to your parents, admitting when you’re wrong, and expressing kindness, love and gratitude. Sometimes, however, there are Romantic themes about following your dreams or believing in yourself. DINO RANCH has some light, Western style action sequences such as chasing dinosaurs, and children getting thrown into the air. So, MOVIEGUIDE® advises discernment for young children.