EMPLOYEE OF THE MONTH

"Funny, But Forced and Foul" 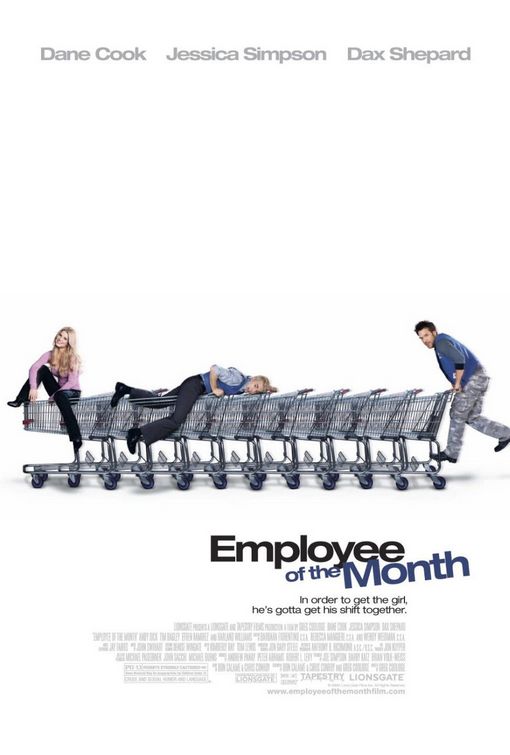 EMPLOYEE OF THE MONTH, a comedy, stars stand-up comic Dane Cook as Zack, a lazy, but long-time worker at the fictional Super Club – the country’s largest bulk-discount retailer. The story pits Zack against Vince. They compete for "Employee of the Month" to win the affection of the beautiful new cashier, Amy, played by Jessica Simpson. Hilarious hi-jinks and plenty of physical comedy ensue as the two men wage war to the bitter end.

EMPLOYEE OF THE MONTH is funny, with some laugh-out-loud moments. Dane Cook brings heart to his role, but the real star is Dax Shepard as Vince. Shepard steals the scenes every time he appears. Sadly, the material they must work with too often makes lowbrow comedy its highlight. Using crude sexual humor that confuses love with lust, the movie appeals to the baser senses of a culture adrift. Apart from the crude humor, the movie's worst part is Jessica Simpson. Her acting is so forced and contrived that, at times, it is almost painful to watch her. Other beautiful actresses have recovered from early disasters (witness Jessica Lange in the 1976 movie KING KONG), but the jury's still out on Miss Simpson.

(RoRo, C, Ab, Pa, Ho, LLL, V, SS, A, M) Strong Romantic worldview that extols human passion, light redemptive elements as slacker learns to take pride in his work and in himself, some immoral elements and anti-biblical elements with crude, sexual references and humor, plus one New Age pagan element as man declares that, “the universe always has a plan” and light homosexual references; 23 obscenities (including one "f" word), four profanities and one obscene gesture, plus a couple crude references to passing gas; mild comedic violence includes man runs face-first into crates on a lift, another man falls off ladder, young boy shoots a tennis ball machine at employees and hits one guy in the crotch, little boy knocked unconscious by store employee, guy gets hit in the head with a golf ball, and another man is hit on accident with a softball bat; strong amount of sexual content and references includes several references to male and female genitalia both in sexual references and as name-calling, a couple of puns about uptight people being sodomizers, one homosexual reference as a man plays with two action figures and makes them kiss, young man grabs a woman’s backside, that same young man kisses a girl after a date and then solicits her for sex, three references to that young man’s fornication with different women, and young lady admits to fornication with her boyfriend; no nudity but a number of shots of female cleavage; light alcohol use as beer consumption is depicted and implied and as wine consumption is depicted; no smoking or drugs; and, miscellaneous immorality includes vandalism, vicious pranks, two men gamble with their lunches, and grandmother plays the Lotto.

Set in the Super Club – the country’s largest, high-volume, bulk-discount retailer – EMPLOYEE OF THE MONTH is a comedy that pits Zack (comedian Dane Cook) against Vince (Dax Shepard) as two competitive workers who compete for the coveted title of “Employee of the Month” and vie for the affection of Amy (Jessica Simpson).

For 10 years at the Super Club, Zack has skated by. Always late, never stressed, Zack brags to his fellow box-boys that maintaining a low profile as long as he has is “an art.” On the other hand, for 10 years at the warehouse retail giant, Vince has worked hard. He has moved his way up the corporate, bulk-discount ladder to become head cashier and winner of 17 consecutive “Employee of the Month” awards.

On opposite sides of the Super Club spectrum, these two young men have had a bitter rivalry of one-ups-manship for years. Now, all their competition comes to a head when Amy, a beautiful new cashier, joins the Super Club team. Learning that Amy has a thing for “Employee of the Month” winners, Zack decides that the only way to win over Amy is to work hard and beat Vince at his own game. But, the deck is stacked against Zack as he struggles to stop Vince from winning his 18th straight award, a new Chevy Malibu, and the affection of Amy. Hilarious hi-jinks and plenty of physical comedy ensue as the two young men wage war to the bitter end.

EMPLOYEE OF THE MONTH is a funny movie with some laugh-out-loud moments. The movie is set in a great environment. The Super Club warehouse discount store provides for some original scenes and makes for some great comedy.

Stand-up comedian Dane Cook brings heart to his role as he captures the essence of that slacker-devil-may-care character that has made a lifestyle of taking no chances and stressing over nothing. He also shines as his character changes. However, Dax Shepard is the true star of this movie. He steals the scenes every time he is on screen. His humor is subtle, his wit is dry, and his comedic timing and delivery are right on the mark.

Sadly, the material that Dax must work with is limited. The script suffers because it often makes lowbrow comedy its highlight. Using crude sexual humor, the movie appeals to the baser senses of a culture adrift. The movie also, like a lot of Hollywood movies these days, confuses love with lust and equates affection to sex. At first glance, Dane’s character, Zack, is taken by the beauty of Jessica Simpson’s Amy. However, once Zack learns that Amy slept with the “Employee of the Month” at her last job, that is when he decides that he needs to work harder to win the award. Now, along the way, he begins to have a change of heart and take pride in his work, but in the final moments of the movie we are reminded that (according to Hollywood) love and sex are the same emotion.

The worst part of the movie (apart from the crude humor) is Jessica Simpson. Her acting is so forced and contrived that, at times, it is almost painful to watch her.

To the “myspace” generation, Dane Cook is THE Rock Star of stand-up comedy. He has a large following of young people. Undoubtedly, therefore, large portions of his fans that do not understand media wisdom are going to show up for this movie. Even though this movie has some laugh-out-loud moments, the crude sexual humor and the immoral romantic worldview make this a movie that media-wise people of faith should avoid.