"Too Frenetic and Too Much Foul Language To Be Really Enjoyable" 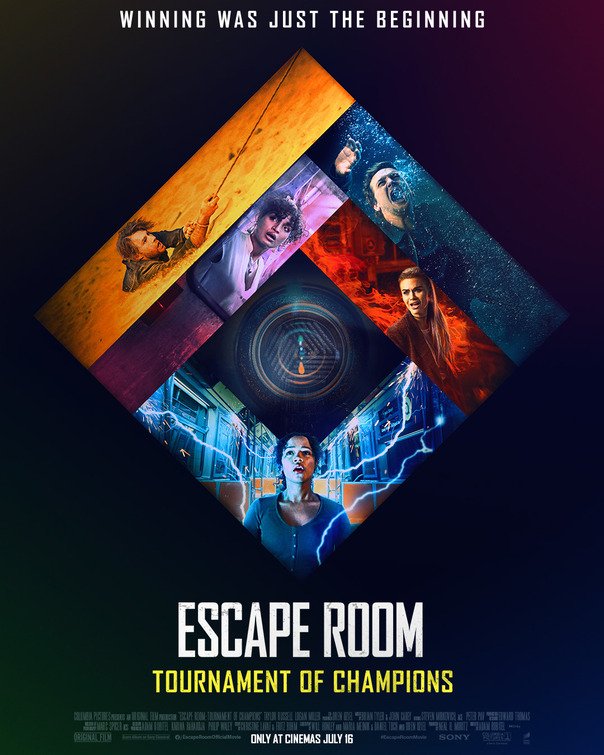 ESCAPE ROOM: TOURNAMENT OF CHAMPIONS is a super intense, harrowing thriller. The movie opens on the two young survivors from the first ESCAPE ROOM movie, Ben and Zoey. Zoey wants to expose Minos Corporation, an evil gambling enterprise for rich people that put Ben and her through a deadly series of escape rooms. Hoping to find some clues, Ben and Zoey visit a warehouse in New York City that Minos apparently has abandoned. However, they end up trapped in another series of deadly escape rooms with four other survivors.

(B, CC, PC, Acap, LL, M):
Dominant Worldview and Other Worldview Content/Elements:
Light moral worldview with some Christian, redemptive elements, including one Christian character prays and sacrifices himself to save the life of another person, and at least one apology and forgiveness occurs, plus a light politically correct, anti-capitalist element where the bad guys use deadly escape rooms to satisfy the bloodthirsty gambling lusts of rich people
Foul Language:
At least, 35 obscenities (including one “f” word and possible another one), four strong profanities (three are GD and one is JC), four light profanities (such as OMG)
Violence:
Strong, intense, but not gory or graphic, violence and harrowing scenes of jeopardy includes a series of escape rooms with deadly traps, laser trap in a fake bank slightly slices woman’s back, six people have 10 minutes to get to fake bank fault before a deadly laser trap falls or is set off, subway car breaks away from train and speeds dangerously toward a dead end or, worse, another subway train, people are thrown about when the subway car reaches a barrier with a large spring device designed to stop a runaway subway train safely, six people in the subway car have to avoid painful electrical lightning shocks that keep getting more powerful and dangerous, characters suffer some electric shocks from all this electrical lightning, one character is eventually shocked to death, people are swallowed by bubbling sand in a fake beach escape room, people are endangered by fire in another escape room, a character is threatened by drowning in one scene, people have to avoid periodic acid rain falling in another escape room made to look like a city street in New York City, some drops from this acid rain hit some of the characters and burn holes in their clothes or burn small parts of skin like part of a hand, etc.
Sex:
No sex
Nudity:
No nudity
Alcohol Use:
Man has an alcohol flask, but it gets damaged (spilling most of the alcohol), and he takes a couple last sips from what remains
Smoking and/or Drug Use and Abuse:
No smoking or drugs; and,
Miscellaneous Immorality:
Victims of deadly escape rooms are forced to move on in the deadly game when a character seems to have died, and there is some question early in the movie whether to be selfish playing the game or help the other game “players,” but for the most part, the victims try to help one another (for example, one victim carries an unconscious victim to safety rather than leave him behind while saving his own skin), plus the bad guys engage in extortion and violent threats against two people to force them to design deadly escape rooms for them.

ESCAPE ROOM: TOURNAMENT OF CHAMPIONS is a super intense, harrowing thriller about several survivors of deadly escape room puzzles who find themselves trapped in another series of escape rooms in New York City engineered by a mysterious, elite, evil gambling enterprise. ESCAPE ROOM: TOURNAMENT OF CHAMPIONS includes a lot of gratuitous foul language and is intense to the point of being too frenetic and grueling, so it’s not a fully enjoyable experience.

The movie opens on the two young survivors from the first ESCAPE ROOM movie, Ben and Zoey. They follow some clues to a warehouse in New York City used by the Minos Escape Room Corporation, which apparently has been abandoned. Minos is the outfit that arranged the deadly escape rooms from which Ben and Zoey were the only survivors. Zoey, who saved Ben’s life, wants to expose the people behind Minos and bring them to justice. Ben is reluctant to face the jaws of death again, but, because Zoey saved his life, he feels obligated to help her.

When they get there, a thief leads them on a chase into the city’s subway system. They find themselves trapped on a speeding engine car, separated from the rest of the train. Four other people are trapped with them, Nate, Rachel, Theo, and Brianna. The six people find out they were all survivors of deadly escape rooms created by Minos. All the metal on the car is electrified. The car soon reaches a dead end barrier, but then electrical lightning starts to build up on the car’s roof.

As the lightning starts to get more and more powerful, Ben, Zoey and the others spy a trap door on the floor. They also figure out that the ads in the car have missing letters. Coins printed with the numbers can fall from the stop-the-train handles attached to the ceiling. Can they find all seven letters in time to insert into a coin slot to release the trap door?

The subway car is only the first of several deadly escape rooms planned for the six victims. Will anyone survive? Will Zoey and Ben uncover the truth about the Minos Corporation so it can be stopped?

ESCAPE ROOM: TOURNAMENT OF CHAMPIONS is extremely intense and harrowing. However, all the traps have a time limit, so the jeopardy is intense to the point of being too frenetic and grueling. As a result, TOURNAMENT OF CHAMPIONS ultimately isn’t an enjoyable experience, except possibly to moviegoers who have a masochistic fascination for such harrowing, grueling scenes. Also, although the movie has a light moral worldview with some Christian, redemptive elements (one of the four new characters is a Christian who risks his life to save another victim), there’s lots of gratuitous foul language. In addition, there’s a politically correct element to the story in ESCAPE ROOM: TOURNAMENT OF CHAMPIONS. To whit, the Minos Corporation uses the deadly escape rooms to satisfy the bloodthirsty gambling lusts of rich people. TOURNAMENT OF CHAMPIONS is clearly designed to lead to a third movie, so the jeopardy to innocent people is obviously not going to stop. All in all, MOVIEGUIDE® advises extreme caution.