"Lots of Adventure and Romance, but a Shallow Dive" 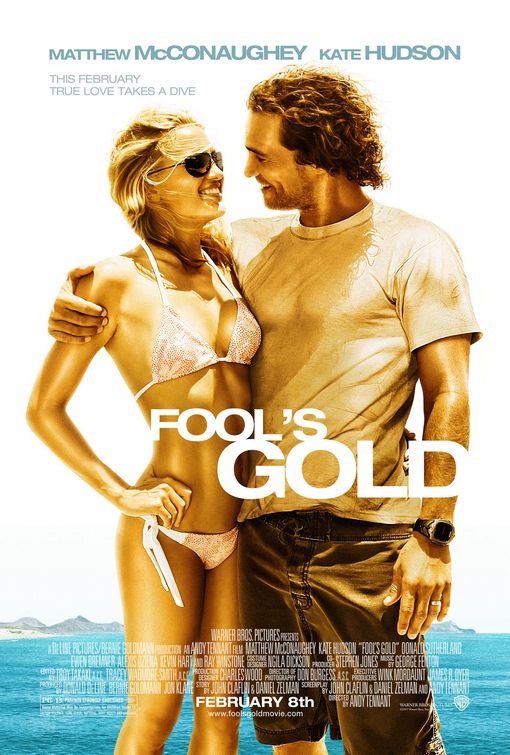 FOOL’S GOLD, starring Matthew McConaughey and Kate Hudson, is an adventurous romantic comedy about an estranged married couple that comes together one last time to find a lost treasure they have spent years hunting. Absent-minded and always late, Finn barely makes it to his own divorce trial from Tess. Finn discovers new evidence in their long-time quest to find 40 chests of priceless Spanish treasure that was lost at sea in 1715. He convinces her new billionaire boss to finance one more campaign to find the treasure. Begrudgingly, Tess can’t resist the idea, but they are not the only ones after the treasure.

FOOL’S GOLD is a fun, but improbable and uneven, movie that feels like a mixture of many other romantic adventure comedies. Though often entertaining, the movie is not very well made. The script misses several plot points and contains very flat characters, including a bad English accent from Donald Sutherland playing Kate Hudson’s boss. The movie also has huge boring sequences of expository dialogue. Finally, the story’s somewhat mixed pagan worldview, sexual elements, foul language, and two glorified homosexual characters will drive away people of faith and values.

(Pa, B, C, Ho, PC, LLL, VV, S, NN, MM) Light mixed pagan worldview with some elements of morality and good versus evil with marriage seen in a positive light and divorce seen as a bad thing and mention of religious freedom seen in a positive light, but two homosexual characters seen in a positive light and one of them says, “I thank God” for his homosexual relationship; 24 obscenities and 22 light profanities (“Oh my God,” etc.); violence includes a lot of adventure violence from gunfire, punching, chase sequences, explosions, people being hit in the head a lot in comic way, bad guys get shot in foot and ear, man gets killed in ocean current up against rock and the audience sees bloody water shoot up on the rocks, and man shot in thigh with harpoon; implied sex in a church by separated married couple although woman makes comment about being struck by lightning because she just had sex in the basement of a church, some kissing, one person makes a comment that lady married a man for sex, sex sounds between married couples heard in the background, and two homosexual characters shown in a positive light; brief upper female nudity as girl in boat flashes guy, brief rear male nudity, a lot of naturalistic upper male nudity, women in bikinis, and sword lands between young woman’s legs; no alcohol use; no smoking or drugs; and, miscellaneous immorality includes trespassing, deceit, blackmail, etc.

FOOL’S GOLD, starring Matthew McConaughey and Kate Hudson, is an adventurous romantic comedy about an estranged married couple who come together one last time to find a lost treasure they have spent years hunting.

Finn (McConaughey) is a good-old boy who lives for adventure and treasure hunting, especially the legendary 18th century Queens’ Dowry: 40 chests of priceless Spanish treasure that was lost at sea in 1715. Absent-minded and always late, Finn barely even makes it to his own divorce trial from Tess (Hudson). However, Finn is not ready to get divorced, and he is not ready to move on past Tess.

Tess, though, seems more than ready to move on from her marriage to Finn. She has a new job on a mega-yacht owned by billionaire Nigel Honeycutt (Donald Sutherland), and she is ready to piece her life back together. When Finn discovers some new evidence in his quest to find the treasure, he charms his way onto Nigel’s yacht and convinces the billionaire and his entitled daughter, Gemma (Alexis Dziena), to finance one more campaign to find the lost gold. Begrudgingly, Tess can’t resist the idea of one last treasure hunt to find the gold that has eluded her and Finn for so long. They are not the only ones after the treasure, however. They must race against Finn’s old mentor and a local gangster to find it.

FOOL’S GOLD is a fun, but improbable and uneven, movie that feels like a mixture of many other adventure comedies throughout the years. From JEWEL OF THE NILE, ROMANCING THE STONE and GOONIES to the NATIONAL TREASURE movies and even McConaughey’s other adventure, SAHARA, FOOL’S GOLD mixes action, comedy and romance in an adventurous way.

However, even though it is fun, the movie is not very well made. The script misses several plot points and contains very flat characters, especially Sutherland and Dziena’s portrayals of Nigel and his debutante daughter, Gemma. Sutherland, for some reason, chooses to have a British dialect to his character, and it is one of the worst, most inconsistent dialect portrayals in recent memory. Dziena’s Gemma is a stereotypical take on pop culture princesses such as Paris Hilton and Nicole Richie. Her portrayal, though, is shallow and off-putting. The movie also has huge sequences of expository dialogue that will completely bore viewers.

Adding to these problems of quality is the movie’s somewhat mixed pagan worldview, including some sexual elements, foul language and glorified homosexual characters. FOOL’S GOLD is a shallow misfire that may leave audience members feeling like fools rather than like gold. For movies with more substance, quality and stronger redemptive content that are still fun and exciting, audiences should go to www.movieguide.org and see what other options may be in theatres or home video.