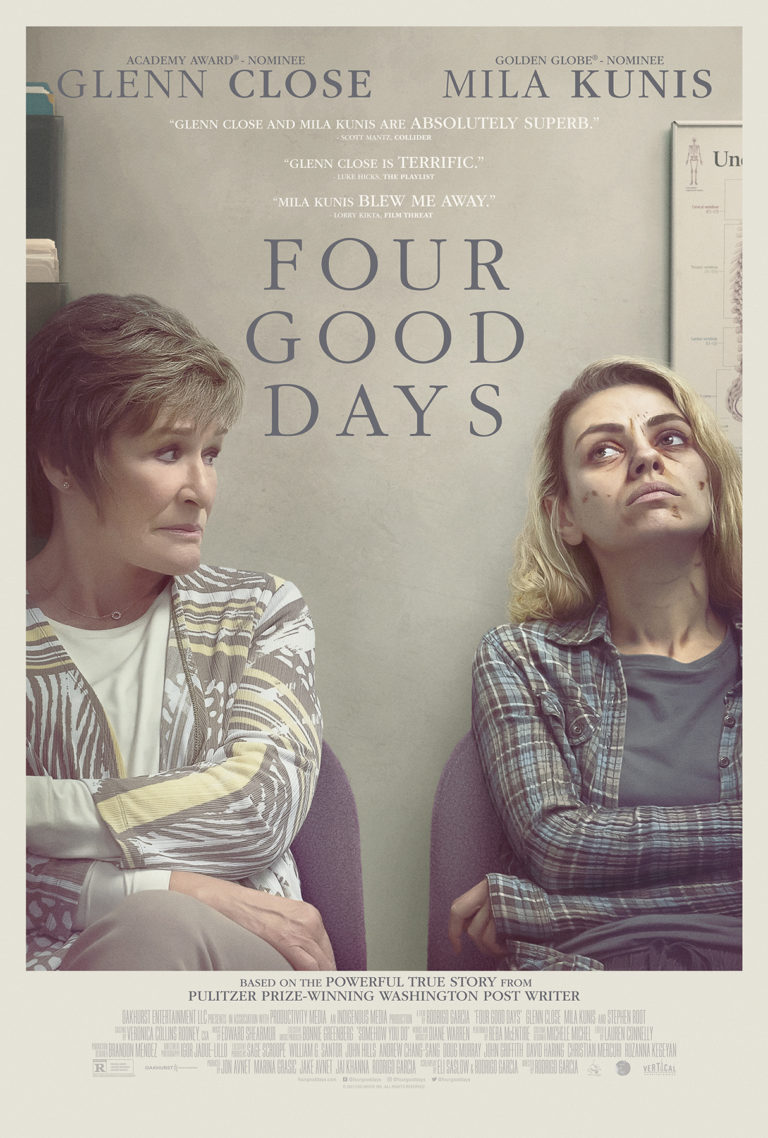 In FOUR GOOD DAYS, a 31-year-old female heroin addict named Molly appears on her mother, Deb’s, doorstep one evening, hoping for a roof over her head. Her mother refuses, but the next morning, she takes her daughter to recovery. The doctor says he can give Molly a shot that can stop her from getting high. However, there’s a catch: Molly must make it through four days of detox before that can happen. Will she make it?

Despite its tough subject matter, FOUR GOOD DAYS is a superbly acted, engrossing movie. It has a strong moral worldview, mixed with some Christian and some pagan elements. The mother is devoted to her child’s wellbeing, which drives the narrative. The pagan elements occur when addicts act on their impulses to score drugs. Positively, there are a few positive Christian references. For example, the mother declares she needs to believe in God since not believing got her nowhere. Also, a support group member at one point says, “Let go and let God.” However, FOUR GOOD DAYS has excessive foul language, strong drug content and some sexual immorality.

(BB, Pa, C, LLL, V, SS, N, DDD, MM):
Dominant Worldview and Other Worldview Content/Elements:
Strong moral worldview where a mother has an obvious devotion to her child’s wellbeing, which drives the narrative, with some pagan elements where several addicts act on their impulses to score drugs, and some positive Christian elements such as mother declares she needs to believe in God since not believing got her nowhere and a support group member at one point says, “Let go and let God”
Foul Language:
At least 79 obscenities (more than 50 “f” words), 12 strong profanities, 23 light profanities, implied vomiting, and a mention of passing gas
Violence:
Light violence in a story about a boy flying off a swing set and getting a fracture
Sex:
Depicted fornication, and a mention of prostitution and trading sex for drugs
Nudity:
Rear male nudity in one scene, and a woman appears in a bikini top
Alcohol Use:
Some alcohol use
Smoking and/or Drug Use and Abuse:
Smoking and drug abuse is at the center of the plot and includes mother finding a syringe for shooting up drugs; and,
Miscellaneous Immorality:
Mention of theft, family discord, name-calling, sarcasm, abortion implied but not actually true in the end, someone says, “You deserve to die,” mother and daughter poke fun at a transgender female, and lying.

FOUR GOOD DAYS follows a heroin addict’s journey to recovery alongside her devoted mother. Despite its tough subject matter, FOUR GOOD DAYS is a superbly acted movie, with a strong moral worldview and some positive Christian elements, but it has excessive foul language, strong drug references and some sexual immorality.

FOUR GOOD DAYS begins with juxtaposition of a young woman and then her as a grown adult, obviously in a very different headspace than in her youth. After the title flashes across that screen, viewers see the same disheveled young woman, Molly, appear on her mother’s, Deb, doorstep. Deb is torn on giving Molly help because she’s a drug addict and manipulated her several times before.

The next morning, Deb takes pity on Molly and drives her to a rehab doctor. The doctor tells the two women that Molly can get a shot that will stop her from getting high if she can detox for four days, hence the movie’s title. It won’t be easy, especially with the hurt Molly and Deb have inflicted on one another, but they set off to make the best of it until the four days are complete.

During the interim time, Molly reconnects with her children, tries to help a friend who’s overdosed, speaks at a high school heath class, and confronts her mother on some serious pain she’s caused in her life. Meanwhile, Deb continues to worry that Molly’s transformation might be too good to be true. This also puts a rift between Deb and her spouse and her other, more successful daughter.

With only 24 hours until Molly receives the shot, she gets a phone call that the doctor needs to postpone her shot, but can she stay clean for much longer?

FOUR GOOD DAYS is like the movie BEAUTIFUL BOY, except it observes a mother/daughter relationship within drug addiction. The physical transformation of Mila Kunis is stellar, and Glenn Close gives an outstanding performance as a concerned mother. Also, several pulsing scenes allow these leading ladies to show off their acting chops. That said, FOUR GOOD DAYS is a cautionary tale, and not a movie to pick for entertainment value. The ending though, will satisfy motivated viewers who can stomach all the heavy content.

FOUR GOOD DAYS has a strong moral worldview overall, with both Christian and Pagan elements. The mother has an obvious devotion to her child’s wellbeing, which drives the narrative. The pagan elements come into play as several addicts act on their impulses to score drugs. Positively, there are a few references to Christianity. For example, the mother declares she needs to believe in God since not believing got her nowhere. Also, a support group member at one point says, “Let go and let God.” However, FOUR GOOD DAYS has excessive foul language, strong drug content and some sexual immorality.