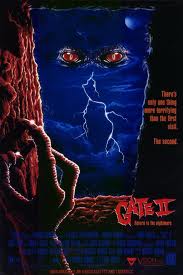 GATE II is a low-budget horror film with an irresponsibly ambivalent message about tampering with the occult. Its storyline is hopelessly muddled, and viewers might leave the movie with the impression that demonic beings can be summoned and dismissed without any consequences.

GATE II begins with 15-year-old Terry, a demonology nerd who believes he can harness power from an obscure “unholy Trinity” in the spiritual realm. Equipped with computer, lasers, candles, and a doomed hamster, he mumbles occultic chants in the ruins of a home trashed by hellish monsters in GATE I. However, his ceremony is interrupted by Liz, who is fascinated by occultism, her aggressive boyfriend, John, and their dimwitted buddy, Moe, who suffers from a heart condition. A foul little creature appears, which John kills with a gun, but it magically resurrects. Terry tosses it into a bird cage. The teens discover the demon is a genie who grants wishes of cash, cars and a renewed career for Terry’s alcoholic father. However, within 24-hours, the car decomposes, Terry’s dad is critically injured and a wad of $100 bills turns to dung. Worse, John suffers a revolting transformation into a 10-foot monster.

This foolishness could be dismissed if it didn’t leave the impression that powerful demonic forces can be summoned and dismissed without consequences. While some slow-motion effects are well-done, acting performances are marginal, and most GATE II production values are clearly low-budget.