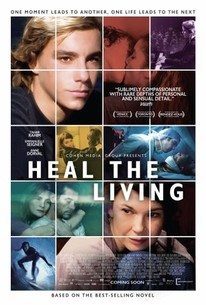 In the French drama HEAL THE LIVING, a teenage boy is fatally injured during a car crash after a surfing trip with friends. Everyone lives except the boy, who didn’t wear his seatbelt. The boy is put on life support, but the doctors inform his parents he’s “brain dead.” Across town, a single mother of two teenage boys is in dire need of a heart transplant. The boy’s family decide to donate their son’s body to help other people. The ill woman gets the boy’s heart. Will she survive?

HEAL THE LIVING is a compelling story about finding hope during tragedy. It reminds viewers death is a part of life. Each actor gives a wonderful performances, keeping the movie engaging. Some incongruent scenes and random flashbacks are confusing to follow until the end when questions are answered. HEAL THE LIVING has some moral, redemptive elements about saving lives through organ transplants and bringing new life from death. However, it contains scenes of bloody surgeries and medical trauma, plus two major female characters are homosexual partners. So, HEAL THE LIVING is ultimately unacceptable.

(PaPa, HoHoHo, B, C, L, VV, SS, A, M) Strong mixed pagan worldview featuring two homosexual lovers as a main part of a story about organ transplants, mixed with some solid moral, redemptive elements in the movie’s premise promoting the good that comes from organ donations, families eventually come together to support one another in trying times, new life comes from death and tragedy, and doctors provide hope and comfort to patients and parents reminding them death is a part of life and a short life doesn’t make one’s life less valuable; four obscenities; strong violence includes a sudden car crash, implied gore from injured bodies, boy’s bloody wounds are shown during surgery, bloody and hard to watch open heart surgery, doctors perform surgery on a dead body, open wounds, gashes, bloody cuts, shots of a dead teenage boy lying in a hospital, and son yells at mother and pushes things around the house out of fear and frustration; light violence, flashback to a deadly car crash; depicted sexual immorality when lesbian woman kisses another lesbian woman and cuddles with her in bed and implied fornication when nurse opens her shirt and exposes her bra to co-worker, and they kiss passionately, plus teenage boy and girl kiss and stroke each other behind a building; upper male nudity and a shot of a woman in a bra; light alcohol use, women drink wine at a party; no smoking or illegal drug use; and, miscellaneous immorality includes dysfunctional family lives depicted.

HEAL THE LIVING is a French-Belgian drama about a heart transplant that brings hope to two unrelated families.

The movie opens with a beautiful shot of the ocean while three teenage boys surf the waves. The long opening uses meditative music and long takes of the ocean water to illicit a peaceful tone. When the sun sets, the three boys pile into a car from their surfing trip. They joke with another and drive home in good spirits. Moments later, a car slams into them, and the sound of sirens are heard. The boys are rushed to the hospital. All the boys are okay, except the only one who didn’t wear his seatbelt. The doctors call the boy’s parents. The parents are separated and have a strained relationship, but come together in the hospital over their son’s fatally injured body.

The doctors tell the parents their son is “brain dead” and is only alive because of artificial life support. They give the parents time to think about what to do. Meanwhile, the doctors discuss the tragedies they must witness with their line of work. One of the doctors and a young nurse make out with each other in a quiet room as if they fear this is their last day on Earth too.

A series of flashbacks shows the teenage boy flirting with his high school crush. He follows her to the bus stop and kisses her in an alley. The audience watches the potential girlfriend grow giddy with excitement he might be her boyfriend and then fall into a mess of tears when she learns of his death. The flashbacks of the boy’s life at school show his death will affect many people.

Miles away, a single mother is battling an illness while struggling to keep her two teenage boys in line. The doctors inform her she will only live if she gets a heart transplant. She goes to see a piano player play music that evening. The piano player turns out to be her former lover. When the show is over, the woman pulls her former lover aside and confesses she pushed her away because she did not want her to see her suffer through this illness. The lesbian lovers go home with each other that night, kiss and embark. The next day, the woman gets a call that a heart has come in for her. She is eager to know who the donor is, but the doctor won’t reveal this information. She assumes it must be an old man. She never thinks it could be a boy’s heart. In the end, the woman gets the heart transplant and the boy dies.

HEAL THE LIVING is a compelling story about finding hope during tragedy and reminding the audience that death is a part of life. Each actor gives a wonderful, realistic performance, keeping the movie engaging for viewers. However, some incongruent scenes and random flashbacks make it a confusing story to follow until the end when everything is revealed how all the characters are connected. HEAL THE LIVING has some moral, redemptive elements about saving lives through organ transplants and bringing new life from death. However, it contains scenes of bloody surgeries and a heart transplant, plus two major female characters are homosexual partners. So, HEAL THE LIVING is ultimately unacceptable.