"The Stuff that Dreams Are Made On" 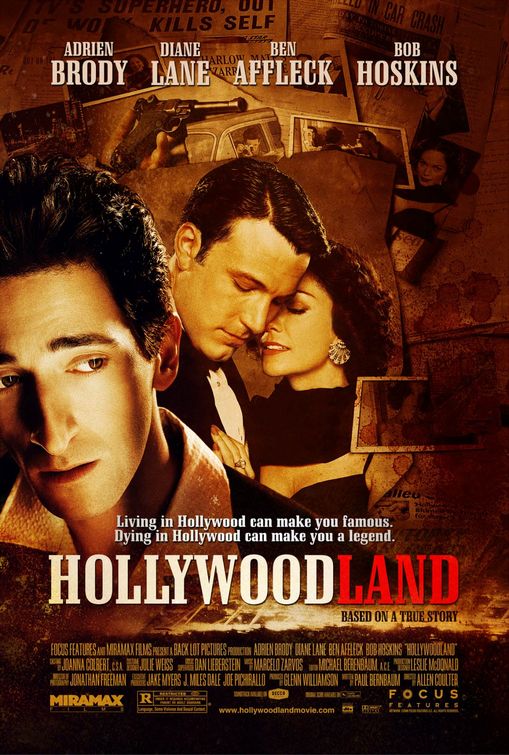 HOLLYWOODLAND is a fictionalized account of a private investigation into the 1959 death of George Reeves, the actor who played Superman on TV. The police in Los Angeles ruled his death a suicide, but his mother hired a private investigator to find the truth. In the movie, the private eye is Lou Simo, a divorced detective who survives on the turned-down cases of his former agency. Lou notices how the alleged suicide damages the joy and innocence of his young son. He earnestly pursues the case, even when the mother calls him off. As Lou investigates, the movie shows flashbacks of George Reeves’ life and career, including his seven-year affair with the wife of a Hollywood mogul with mob ties and his impending marriage to a golddigger.

HOLLYWOODLAND exaggerates some of the negative aspects of the life and career of the man who played Superman. It brilliantly captures, however, the effect that Hollywood’s dream factory can have on people inside and outside of the entertainment industry. Despite this positive quality, HOLLYWOODLAND deserves an extreme caution for its adult themes, strong foul language, a crude sex joke, and a scene of depicted fornication.

(B, PaPa, RH, C, Ho, LLL, VV, SS, N, AA, DD, MM) Light moral worldview in a dark setting with characters behaving in a pagan fashion, plus some revisionist history and false rumors accepted, and light positive references to Jesus seem to be intended to elicit serious thoughts among viewers; at least 37 obscenities, including some “f” words, 15 strong profanities and two light profanities; some strong mystery violence such as implied possible suicide with sound of gunshot, shots of blood on wall, detective beaten up, man hit hard on head, punching, implied murder of woman as police stand around her body, TV star flying on wire falls down when wire breaks, TV star takes part in staged fight scene with Wild West bank robbers as part of a personal appearance, and flashbacks of possible murder and possible accidental shooting during struggle; implied adultery, rich married woman buys her lover a house for them to be together, implied fornication as couple lies in bed the next morning, depicted fornication between couple mostly clothed (woman wears bra and skirt and man has his shirt open), implied oral sex, and woman admits to her boss that she has slept with another man; no explicit nudity but one or two women in bra, upper male nudity and rear male nudity as man prepares for bed; alcohol use, drunkenness and man said to have a drinking problem; smoking; and, detective lies and bribes people during his investigation, minor character falsely accuses his wife of cheating on him and hires a detective, detective breaks into murder scene, and corruption.

HOLLYWOODLAND is an engrossing, but fictionalized account of a private investigation into the death of George Reeves, the actor who played Superman on TV. The police in Los Angeles ruled his death a suicide, but his mother hired a private investigator because she thought George had everything to live for and could not have taken his life.

In the movie, the private eye is Lou S, a divorced detective who survives on the turned-down cases of his former agency. Lou notices how the alleged suicide damages the joy and innocence of his young son. He earnestly pursues the case, even when the mother calls him off of it. As Lou investigates, the movie shows flashbacks of George Reeves’ life and career, including his seven-year affair with Toni Mannix, the wife of a Hollywood mogul at MGM with mob ties, and his relationship and impending marriage to a golddigger.

HOLLYWOODLAND overplays the disdain that George Reeves may have felt at times for the role that made him famous. For instance, the movie only has one scene showing him actually enjoying being recognized as Superman by children. Another scene with children at a personal appearance finds him taking a cynical approach to appearing before them. This is contrary to some reports, which have found that Reeves enjoyed the adulation of children and felt such a responsibility to them that he even quit smoking.

The movie also leaves out some of the best clues suggesting that Reeves did not kill himself. For example, Reeves had landed the role of the detective in PSYCHO and had even shot a few scenes for the movie days before he died. Also, he had just been hired to reprise his Superman role on TV for two years, with more money, and had scheduled a couple personal trips he was looking forward to, including a honeymoon with his fiancée. Both Toni and her husband had reason to murder George, and his fiancée may have killed him in an accidental shooting. Still, it is possible that Reeves became despondent that night after a fight with his fiancée earlier that day and during the party later at his house, which may not have been as successful as he planned because of their fighting.

The movie correctly shows, however, that Reeves did indeed have a seven-year affair with Toni Mannix, the wife of MGM mogul Eddie Mannix. Reportedly, Mannix was a former mobster hired by MGM to keep the studio and its stars away from scandal. It also shows George’s fondness for the night life and the problems he apparently had with alcohol, although the movie probably exaggerates that a little bit. Overall, therefore, the historical accuracy of this movie is a little mixed. On the positive side, the movie never depicts the suicide of George Reeves, although it does depict two other possible scenarios for his sudden death.

HOLLYWOODLAND has more on its mind than just providing a tantalizing real-life mystery shot in an exciting film noir manner. The movie’s best scenes are its ruminations on the effect that the Superman role had on children and the effects that Hollywood’s dream factory has on people like Reeves and his fiancée, who long for the kind of stardom, celebrity and wealth that only a few people in Hollywood ever attain. Thus, the movie’s scenes with the detective’s son, the scenes dealing with the popularity of the Superman TV show, especially with children and families, and the scenes revealing Reeves’ lackluster career outside of Superman are incredibly powerful. These scenes lift this movie above the mundane and perfectly capture the effect that the entertainment media can have on people inside and outside of Hollywood. To paraphrase hardboiled private detective Sam Spade in THE MALTESE FALCON, who was himself quoting Shakespeare, Hollywood is “the stuff that dreams are made on.”

Adrien Brody seems a little miscast as the private detective investigating the suicide. Ben Affleck also seems a little miscast as George Reeves. Both actors, however, do a good job, as does Diane Lane as Toni. Brody is especially good in his scenes with the detective’s son and his ex-wife. One scene where Affleck plays George Reeves playing Clark Kent in the TV series is a perfect replica of the corny scenes everybody loves so much. In that brief scene, Affleck brilliantly captures George’s performance as Clark Kent. The movie should have including a couple more enjoyable recreations like that from the TV series.

Despite the movie’s positive qualities, HOLLYWOODLAND deserves an extreme caution. There is plenty of strong foul language, including strong profanities, and depicted violence. Also, although most of the depiction of the people’s illicit sex lives is implied, there is one very crude sex joke in one scene and one scene of depicted fornication sex between George Reeves and his fiancée, who are mostly clothed in the scene (she wears a bra with skirt and he has his shirt open). The filmmakers could reach a bigger audience with a PG-13 rating if they had deleted the R-rated foul language and cut out the two crude sex scenes.