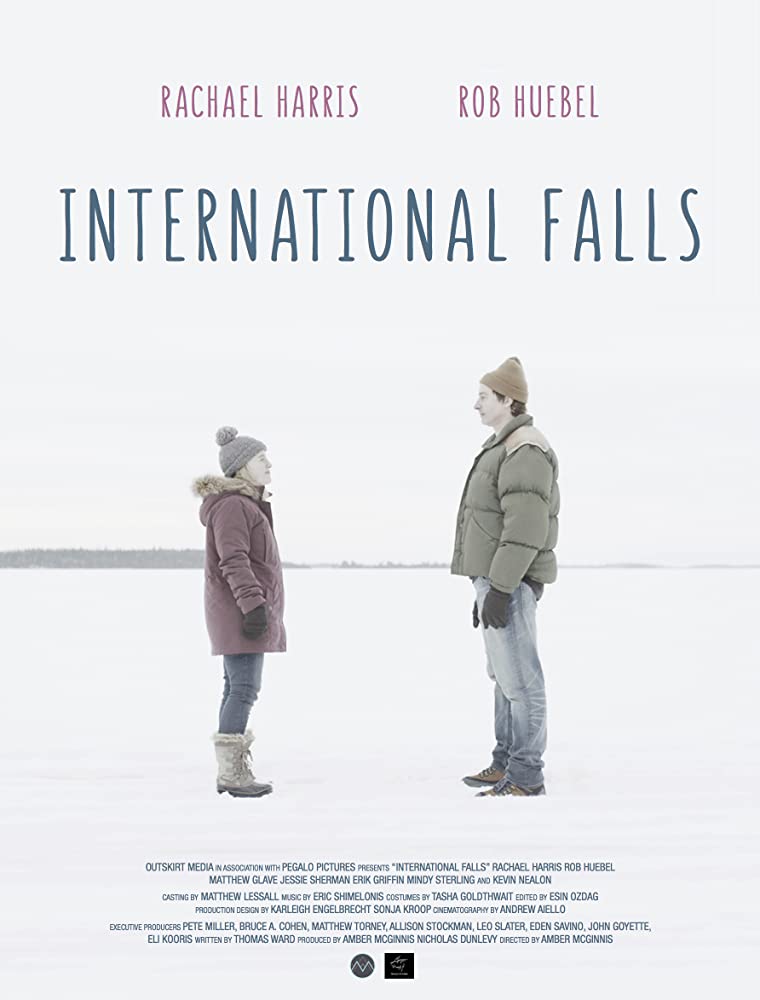 A serious comedy, INTERNATIONAL FALLS follows Dee, a middle-aged wife and mother of two daughters, who works at a hotel in the tiny town of International Falls, Minnesota. Her husband is cheating on her, and Dee wants to become a stand-up comedian. Tim Fletcher, a troubled stand-up comic estranged from his wife, comes to perform in town. Dee and Tim strike up a friendship that leads to an intimate professional, emotional and sexual connection.

INTERNATIONAL FALLS is compelling and sometimes funny, with solid performances and a nice piano score that beautifully matches the onscreen action. However, some dialogue hurts the movie’s quality. There are some moral elements about wanting the best for one’s friends and children, and a pro-life line at the end. Also, the two lead characters discuss faith in God, but they commit adultery, and the female lead has a Romantic attitude. She’s super focused on her personal desires to follow her dreams to start a new career as a comic. INTERNATIONAL FALLS also has lots of strong foul language, sexual content and other immoral behavior. INTERNATIONAL FALLS is excessive and ultimately unacceptable.

(BB, C, Ro, Ab, VV, LLL, SS, N, AA, DDD, MM):
Dominant Worldview and Other Worldview Content/Elements:
Strong moral worldview stresses loving one’s children, trying to make it work with one’s spouse and caring for friends, with characters reading from the Book of Ecclesiastes from a hotel Bible and talking about faith, and one instance of someone thanking God out of relief, but one “believer,” a practicing Lutheran, diverts the conversation so they don’t get too involved in discussing the details of what she truly believes, plus some Romantic elements where lead female character wants to follow her personal dreams to become a stand-up comic, and a lewd joke about nuns
Foul Language:
About 69 obscenities (including 39 “f” words), nine light profanities, some vulgar words, and brief potty humor
Violence:
Strong and light violence includes characters jokingly say “don’t rape me” as they lay in bed next to one another, character daydreams she shoots her husband’s mistress in cold blood, blood depicted, and character jokes about beating her husband’s mistress to death
Sex:
Strong sexual content includes implied fornication and adultery, a comment about self-pleasure, male character mentions in his stand-up routine that he enjoys when his unmarried friends talked about their sexual adventures with many women, conversations about adultery, stand-up comics make lewd jokes about porn and use both slang and the proper medical terminology to get their points across, mention of a husband and wife having phone sex, references to a man cheating on his wife, references to the man’s mistress, female character pleasures a male character under the covers (not depicted) despite them both being married and barely knowing each other, unmarried couple makes out in a few instances, and a lewd joke about menstruating nuns
Nudity:
Upper male nudity, and married woman only has a sheet around her naked body after she’s committed adultery
Alcohol Use:
Character buys hard liquor at a convenience store, characters drink alcohol at a hotel restaurant/bar, and a character pretends to be drunk
Smoking and/or Drug Use and Abuse:
Mention of smoking, character buys cigarettes, character took Xanax from his estranged wife and occasionally takes them, same character offers them to another character, and eventually the combination of alcohol and over the counter medication kills a character; and,
Miscellaneous Immorality:
Quick comment where a character tries to be funny and relate the movie’s setting in a small snowy Minnesota town to Soviet Atheist/Socialist Dictator Joseph Stalin, lying, a divorce occurs, and a character pokes fun at marriage, but that ultimately just reveals the state of his own broken marriage.

A serious comedy, INTERNATIONAL FALLS follows Dee, a middle-aged wife and mother of two in International Falls, Minnesota, who works at a hotel and has aspirations of becoming a stand-up comedian. When comedian Tim Fletcher comes to perform in town, Dee and Tim strike up a friendship that leads them to an intimate professional, emotional and physical connection. INTERNATIONAL FALLS has a mixed worldview with one poignant conversation about the Christian faith and some Romantic elements where the lead character wants to pursue her personal dreams. Due to lots of strong foul language, overt lewd behavior and references, and other immoral behavior, MOVIEGUIDE® finds INTERNATIONAL FALLS excessive and ultimately unacceptable.

The movie begins with Dee working at the local hotel in her small hometown of International Falls, Minnesota. Dee and her coworker, Ruthie, are in the middle of a conversation when Tim Fletcher, a stand-up comedian, checks into the hotel in anticipation of his show that will take place at the hotel. Dee finds something about Tim intriguing considering she herself has aspirations of becoming a stand-up comedian.

Acting on her curiosity, Dee sees Tim’s routine at the hotel’s bar/restaurant. Afterwards, Dee pretends to be drunk and goes into Tim’s hotel room where she proceeds to perform a sexual favor for him. Dee leaves and almost gets out of her car after a long day at work, but instead from her driveway, calls her husband and makes up an excuse to head back to the hotel. Tim lets Dee back into his room and offers her a drink and a Xanax that he took from his own wife. After Tim’s wife calls him on the phone to tell him about their son, Tim asks Dee to literally stomp on his cell phone and then Dee does the same thing to hers. The pair sleep in the same bed that night but aren’t physically intimate.

The next morning, Dee takes Tim to the post office and shows him the sights that International Falls has to offer, which Tim considers dismal. Since their adventures take place in the thick of winter, Dee takes him on a frozen lake, and they end up kissing alongside the shore when all of a sudden, her husband, Gary, drives up on a Snowmobile. Dee lies and says the hotel asked her to chaperone Tim the whole day, since he’s a “VIP” guest. Gary reluctantly drives away.

As Dee and Tim get to know one another better, the viewer learns they’re both unhappy in their marriages (ya think?). Also, Gary is cheating on Dee, and Tim and his wife are separated. So, the emotional and physical intimacy between Dee and Tim starts to bud even stronger.

Events come to a head near the halfway point when Tim delivers a sad comedy routine that evening that only reinforces the fact that he’s really no good at his job. The scene also reveals the brokenness between him and his estranged wife. Tim asks Dee if she wants to come in his room for a “retirement party,” and she obliges. While kissing, Tim asks if she’s sure she wants to go through with intercourse, and the two joke that they’re using each other.

The morning after, Dee shares with Tim that her mother died last year. Dee is a practicing Lutheran apparently, and Gary is on the board at the local church. Dee says the idea of Heaven brought her comfort with her mother’s passing, and Tim seems genuinely interested, since the conversation started as he read a passage from the hotel’s Bible in the side dresser. Suddenly, the phone rings. It’s Gary, and he’s in the lobby with their two daughters.

Tim, in a moment of chivalry and care for Dee, tells Gary over the phone that he needs to leave the hotel and stop hiding behind his daughters. Tim rightly says that affairs don’t just happened and stresses the need to make a choice and not try to “have your cake and eat it too.” Dee and Tim have one last conversation where he encourages her in her dreams to become a comedian and even gives her his personal comedy journal where he stores his ideas for stand-up routines.

INTERNATIONAL FALLS has a solid cast who act on the script to the letter. The movie’s piano score beautifully pairs with the onscreen action. Perhaps the most compelling scene in the movie is when Tim and Dee discuss faith in God and the value of deep, meaningful conversations. That said, it’s clear that INTERNATIONAL FALLS is for a niche audience. Some lines of dialogue are completely unnecessary and bring the movie’s quality down overall.

INTERNATIONAL FALLS has a mixed worldview. Although the two lead characters discuss their faith in God, or lack thereof, they’re cheating on their spouses. INTERNATIONAL FALLS does have some morality when it comes to caring for the best thing for one’s friends and children. However, the movie also draws on a Romantic worldview where a character desires to follow her personal dreams to start a new career as a comedian. The movie also has a regrettably high amount of strong foul language, dialogue about sex, pornography, infidelity, and other immoral behavior. INTERNATIONAL FALLS ends with a pro-life line about pressing on in life despite challenges, but MOVIEGUIDE ® finds INTERNATIONAL FALLS excessive and ultimately unacceptable.