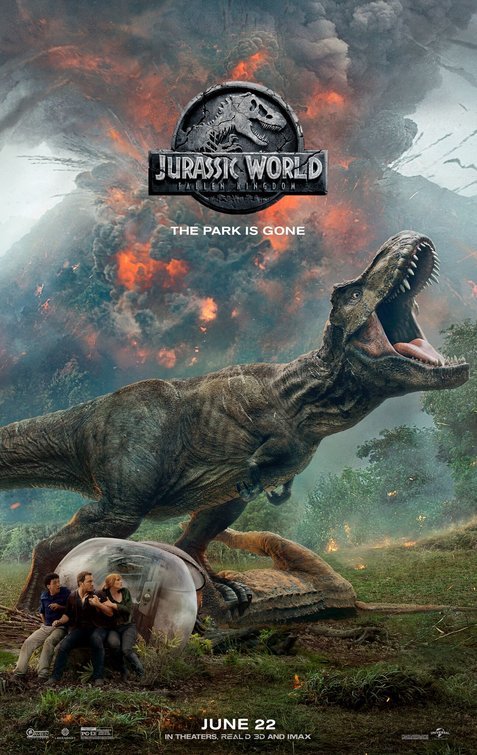 JURASSIC WORLD: FALLEN KINGDOM is an intense, action-filled, roller coaster ride. Claire and Owen from the previous move go to the island where Jurassic Park was located to save the dinosaurs on the island, which is about to be destroyed by a suddenly active volcano. Claire has funding from a foundation to access the computerized genetic tags for each dinosaur, so they can save them. However, the Foundation’s head trustee wants to auction the dinosaurs to the highest bidder. Now it’s a battle against time to save the world and the dinosaurs.

JURASSIC WORLD: FALLEN KINGDOM is extremely entertaining and surprisingly funny, with lots of thrills and chills. Like many classic monster movies, it poses serious issues, that man should not be playing God and that life is worth preserving. So, the movie is strongly redemptive and moral. FALLEN KINGDOM doesn’t have too much objectionable material, but it does have some obnoxious foul language lots of death and mayhem, including people killing other people. So, MOVIEGUIDE® cautions parents with little children and anyone who gets bothered by thrills and chills.

(BB, CC, AC, E, Ev, Cap, Acap, LL, VV, A, M):
Dominant Worldview and Other Worldview Content/Elements:
Strong moral worldview and perspective, with very strong references to Almighty God, an act of God, God redressing the balance, redemption, salvation in the context of the storyline, with a very nuanced battle between destroying the dinosaurs who could destroy mankind and saving the dinosaurs because they’re living beings, plus villains are motivated by greed and are selling the dinosaurs to individuals and governments, a statement condemns greed and government involvement in the problem, and some environmentalist elements, light references to evolution, and contrasting capitalist good grandfather with evil greedy capitalists;
Foul Language:
12 obscenities and two profanities, one light and one exclamation using the word Jesus from Chris Pratt;
Violence:
Lots of action violence with very little splatter of blood and gore, but the dinosaurs are always killing the villains and other dinosaurs, man’s arm bitten off, dinosaur falls and gets impaled, animals get killed, volcano explodes, building collapses, people drown, cyanide is released, lots of disastrous situations;
Sex:
No objectionable sexual content, but there’s one kiss and one cuddle;
Nudity:
No nudity;
Alcohol Use:
Brief wine drinking;
Smoking and/or Drug Use and Abuse:
No smoking; and,
Miscellaneous Immorality:
Dishonesty, disloyalty, theft, illegal trade in dinosaurs, genetic manipulation and creation of new species, cloning.

JURASSIC WORLD: FALLEN KINGDOM is an intense, action-filled, roller coaster ride, popcorn movie with some heavy reflections about mankind messing with nature, creating monsters and about greed and government mismanagement. FALLEN KINGDOM is surprisingly clean for all the constant violence, in that it doesn’t show the violence with all the modern, ugly effects. The movie talks a surprising amount about God and man creating his own monsters, which is very much like the storyline of FRANKENSTEIN. FALLEN KINGDOM can be seen as a spoof of classic monster movies, with intentional humor, or it can be seen as an action movie that telegraphs its punches. You be the judge.

The movie opens with a bathysphere diving toward the bottom of the lagoon to retrieve a bone from the skeleton of a dinosaur. One of the men operating the bathysphere is scared, but the other man says don’t worry, all the dinosaurs have been killed, which is your cue that a dinosaur’s going to show up. Before the dinosaur attacks the bathysphere, they release the bone to the surface, where it’s retrieved by a helicopter, at which point other dinosaurs attack, as if condemning this theft of their graveyard. Of course, the people who are most frightened get killed first by the dinosaurs.

Cut to a Congressional hearing debating whether they should save the dinosaurs because they are living beings that a whole generation of people has grown up with their existence, or allow the dinosaurs to be killed in an impeding volcanic extinction event on Isla Nubar, the island where Jurassic Park was located. Returning as the chaos mathematician, Ian Malcolm, Jeff Goldblum refers to Almighty God and to an act of God. He contends they should allow the dinosaurs to die off naturally, because they have created monsters who could bring about the fall of human civilization. Malcolm’s testimony bookends the movie. The Congressional committee pushes on his comment that the volcano is an Act of God, and he replies by talking about people offending the natural order of things.

Cut to Claire and a group of advocates for the dinosaurs trying to protect the dinosaurs. Claire thinks she’s achieved a breakthrough when she gets one senator to see her point of view, but the government refuses to intervene to save the dinosaurs.

Just when all seems lost, the trustee of the Lockwood Foundation, a man named Mills, calls Claire to come meet the head of the Foundation, Mr. Lockwood. At the meeting at a beautiful manor house in Northern California, which is also a little eerie and where everyone speaks the King’s English, Mills and Lockwood explain that John Hammond started his experiments to bring dinosaurs back to life in the basement of this big manor house. Claire says that’s a miracle several times. So, Mills, speaking for the Lockwood Foundation, has decided to rescue the dinosaurs. He needs Claire to go to Isla Nubar to access the wifi tags for each dinosaur, so they can find each dinosaur to save its species. Lockwood’s granddaughter is running around the manor house picking up on all the different aspects of what’s happening.

Claire searches out Owen, the animal trainer from the previous movie, to go with her, especially to find Blue, the intelligent Velociraptor that Owen trained. When they get to the island, they find an army of men run by the tough Mr. Wheatley trying to round up all the dinosaurs and put them into steel trailers to take them to the mainland. Claire unlocks the computers, they find Blue and, while Owen is trying to befriend Blue, one of the Wheatley goons shoots Blue. Wheatley and his men leave Owen unconscious to be killed by the lava or the dinosaurs.

Meanwhile, Claire, a dinosaur vet, and a young computer hacker try to escape the rampaging dinosaurs running from the lava. Owen wakes up, barely survives the lava, and chases after them. Eventually, after much derring-do, they get on a truck, get barely on the boat, find the trailer with Blue, and operate on Blue, remove the bullet and give him a blood transfusion from a tranquilized T-Rex.

Eventually, they return to the manor house with the dinosaurs. Claire, Owen, and the team are imprisoned. Mills has hired a high-class auctioneer to sell the beasts around the world. Some of the beasts are weaponized, including a new dinosaur breed called the Indoraptor. The doctor designing these beasts says they’re not ready yet, and guess what happens when you have a whole lot of dinosaurs in a manor house where there are a lot of greedy people trying to buy them for nefarious purposes.

Meanwhile, the granddaughter, Maisie, has found that her grandfather was murdered by Mills. She finds Claire and Owen, and now it’s a battle against time to save the world and the dinosaurs, with a couple very interesting plot devices that some people will see coming.

Since FALLEN KINGDOM is a sequel preparing the next sequel, the only soft spot in the non-stop jeopardy is the ending. Even so, stay for the end of the credits.

On one level, JURASSIC WORLD: FALLEN KINGDOM is appropriately rated PG-13 as a monster movie with lots of action, thrills, and chills. Like many classic monster movies, though, it poses serious issues, that man should not be playing God and that life is worth preserving, even when that life is the byproduct of man’s misguided creation. All of these themes can be found in FRANKENSTEIN movies.

FALLEN KINGDOM is extremely entertaining, but some people found the ride a little too predictable while others, including MOVIEGUIDE®’s reviewer, saw it as a sendup and a spoof of classic monster movies that was very funny. The acting is good but doesn’t take itself too seriously. The action is adroit. The music by Michael Giacchino, who also did the two INCREDIBLES movies, is superb. Some of the humorous events, such as the Indoraptor caressing the granddaughter’s hair ala King Kong and tapping its toe as if bored, are really quite wonderful evocations of scenes from classic movies.

The movie doesn’t have too much objectionable material, but Owen does exclaim Jesus’s name in an obnoxious way. Of course, there’s a lot of death and mayhem, including people killing other people. So, MOVIEGUIDE® cautions parents with little children and anyone who gets bothered by thrills and chills.