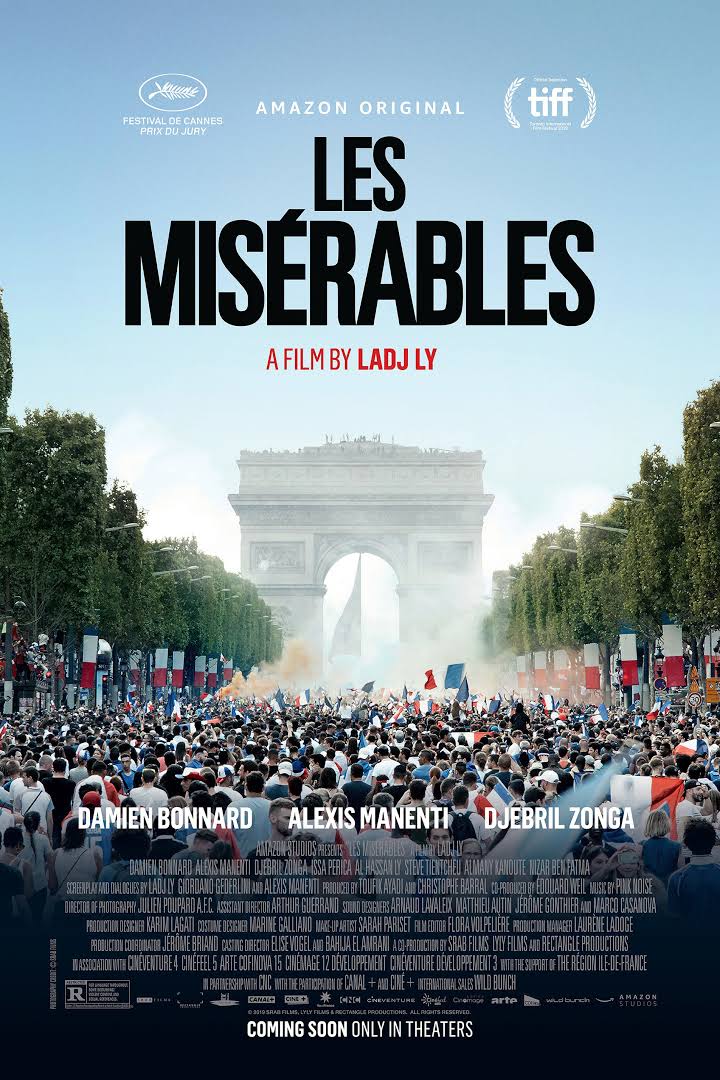 LES MISÉRABLES (2020) is a modern-day French crime drama set in the poverty-stricken, crime-ridden Paris suburb from Victor Hugo’s original book. Ruiz, a policeman from a rural district, joins the two-man team patrolling the neighborhood. The team has trouble controlling the unruly teenagers. It doesn’t help that the team’s leader is a jerk. Most of the teenagers come from Muslim families, but the teenagers themselves seem fairly secularized. The policemen encounter trouble when a young teenage thief’s arrest goes wrong. Their jobs could be on the line, but so could the unstable peace in the neighborhood.

LES MISÉRABLES is a pretty tense movie. It has a unique setting, with unique situations. However, the movie’s Romantic politically correct worldview tries to blame society for the misbehaving children and teenagers. The young thief gets hurt, but, otherwise, he’s not as sympathetic as the movie seems to intend. Eventually, he leads a gang of masked thugs to attack and even kill the three policemen. Ultimately, the movie’s political viewpoint isn’t convincing. LES MISÉRABLES (2020) also has some Pro-Muslim content, lots of strong foul language and brief drug references.

(RoRoRo, PCPCPC, FRFR, B, LLL, VV, S, N, A, DD, MM):
Dominant Worldview and Other Worldview Content/Elements:
Very strong Romantic, politically correct, leftist worldview blaming society and police for injustice and poverty rather than sinful human nature and provides no real solutions, much less any Christian or biblical ones, with a positive view of adult Muslim leaders, though their children seem rather unruly and secularized, plus one character tries to show compassion for a young Muslim teenager who gets hurt, but the teenagers acts out and steals an exotic animal that becomes endangered because of the boy’s actions
Foul Language:
At least 88 obscenities (about half are “f” words) and one profanity, plus a boy urinates his pants out of fear
Violence:
Strong violence includes fathers hits young misbehaving teenage son in police station, man chases and grabs young teenage boy to arrest him, police threaten a group of children with a pepper spray type of substance, man shoots young teenage delinquent trying to escape with a flash ball gun, guns are shown and in one instance shot towards the sky, a group of masked teenagers attacks three police officers by throwing things at them and firing fireworks at them and beating them with bats and chasing them, a group of boys squirt water guns at police while the policemen are in their car with the windows down, young teenage boy put in a cage with a lion to teach boy a lesson, young teenage boy holds a flaming Molotov Cocktail up and threatens to throw it at a policeman, a man threatens a community leader with violence if he doesn’t return the lion cub that a teenager stole, and boys vandalize a car
Sex:
No sex scenes, but teenage boy uses drone to spy on teenage girls in their apartments a distance away from him and a policeman likes to frisk younger women on the street on his beat
Nudity:
Two instances of upper male nudity, one when a group of boys are playing in a swimming pool, and another when a man is celebrating a sports team
Alcohol Use:
Two instances of casual alcohol consumption
Smoking and/or Drug Use and Abuse:
Two instances of cigarette smoking and two instances of smoking with hash; and,
Miscellaneous Immorality:
Strong miscellaneous immorality when boy caught stealing, many instances of bullying in the workplace and by children to one another, one instance of breaking and entering to fly a drone, slander throughout, and plenty of teenage rebellion when teenagers go after the police.

The movie opens with footage from the 2018 World Cup in France of a united nation. The footage focuses on one young Muslim teenage boy named Issa, who later is revealed as a local troublemaker.

The audience is then introduced to Ruiz, a man who’s moving to the Paris suburb of Montfermeil and transferring to the local police force. His new police team includes the leader, a white policeman named Chris, and his Muslim partner, a black man named Gwada. Known as the place where Victor Hugo staged parts of his novel, also titled LES MISÉRABLES, the suburb was the site of riots in 2005. Chris and Gwada tell Ruiz that the suburb was a hotbed of crime until the Muslim Brotherhood organized the local Muslims. However, the community has trouble keeping its teenagers in line, who roam the streets looking for mischief, especially boys like Issa and especially during the summer when school isn’t in session. The movie even shows a scene of several older bearded Muslim men telling a group of boys to behave themselves and inviting them to stop by the local mosque to have some snacks and ice cream.

Chris decides they should take Ruiz on a tour of the neighborhood, but Ruiz soon realizes the type of policing he’s used to is not how Chris and Gwada do it. For example, Chris likes to frisk some of the local women on the street, who may or may not be prostitutes.

Suddenly, the policemen come across a group of men arguing with the suburb’s local “mayor,” who seems to be engaged in a protection racket at the local street market. The men are from a gypsy circus that just entered the suburb to perform. They claim someone stole the lion tamer’s beloved little lion cub, named Little Johnny. The lion tamer warns the mayor that, unless they find the cub and return it, the gypsies will return with weapons. To defuse the situation, the policemen agree to find the cub.

As they drive around looking for the cub, Chris and Gwada almost haze Ruiz by doing things they don’t want to do, and things they know are wrong. They also talk down to him, call him names and don’t listen to anything he has to say. They order Ruiz to talk to Salah, the local Muslim Brotherhood leader, who also operates a popular fast food kebob place where Muslim men gather to talk. When Ruiz tries to ask Salah if he knows anything about who took the lion tamer’s cub, Salah only gives him self-righteous Muslim platitudes about lions being noble creatures who shouldn’t be placed in cages.

Chris decides they should look on social media to see who has the lion cub. These people are stupid, Chris notes. Sure enough, the team finds an Instagram photo of young Issa with the cub. They find Issa playing soccer with his friends, but have to chase him down. When Chris finally grabs Issa, his friends start to throw things at the three policemen. The situation quickly turns dangerous when, during the melee, Gwada fires his Flash Ball weapon at Issa trying to run away again. The weapon seriously injures Issa’s right cheek, just missing his eye. Making matters worse, the men and Issa’s friends realize the whole incident was caught on a drone. The drone is being operated by another Muslim boy, Buzz.

Outside the circus tent, Chris nixes Ruiz’s suggestion that they now take the injured Issa to the hospital. If they do that, they won’t be able to keep their jobs, Chris observes. Instead, he orders the team to take Issa to another local gangster, a helpful informant who can help them find out who’s running the drone. Meanwhile, Issa’s friends run to the mayor. They tell him what happened, informing him that Buzz’s drone has the whole incident on the drone camera’s memory card.

The mayor and the three policemen all show up at Salah’s kabob place at the same time. There, they find that Buzz is already there and has given the drone and the memory card to Salah. An intense negotiation begins over the memory card. The mayor tells Salah that, with the memory card, the three policemen will have to do what they say. Chris is uncontrollably angry about that, of course. So, Ruiz tries to argue with Salah that, if he hands the card over to him, Ruiz can keep the peace and even make sure that Chris will stop harassing the people.

Who will end up with the memory card? Will the policemen be able to keep their jobs, but under what conditions?

LES MISÉRABLES (2020) is a pretty tense movie. It also has a unique setting, with unique situations. LES MISÉRABLES is not a solution-oriented drama. Instead, it’s a problem film, a movie designed to point out a problem, in this case, the volatility of a poverty-stricken and crime-ridden area in the Paris suburbs, where the police harass the citizens in order to keep everyone in line. Also, the movie ends with a quote from its muse, Victor Hugo, “Remember this, my friends: there are no such things as bad plants or bad men. There are only bad cultivators.”

The movie’s primary flaw is that the alleged “victim” in the story, the young Muslim teenager named Issa, is an unruly jerk. For example, he steals a lion cub from its owner just to impress his friends, including local girls, and gain popularity on social media. Then, compounding this irresponsible act, he can’t take care of the innocent animal, and it gets loose from him, to wander the streets alone. Then, when the police try to talk to Issa about the animal kidnapping, he defies them and tries to run away. Finally, when he gets hurt due to these actions, and no one seems to care about his injury, [SPOILER FOLLOWS] he decides to lead a gang riot the next day to attack the policemen and, apparently, try to kill them (the movie ends with a close up of Issa as he ponders whether to hurl a flaming Molotov Cocktail at Ruiz, who’s trapped in an apartment corridor with his two new police partners). Thus, it’s hard to feel any sympathy for Issa or his friends, no matter how badly they (and the movie’s writer/director) think the police have been harassing them and the people in this particular community. Instead, one feels sorry for the policemen and for the adults in the community who have to put up with unruly children like Issa and his friends.

Thus, despite the Romantic quote from Victor Hugo that ends the movie, the movie’s strong Romantic worldview isn’t convincing. Neither the children nor the adults in the community depicted in the movie seem like victims of an unjust society. By attacking the three policemen twice in the story, the children and teenagers are not sympathetic, and the adults come across as ineffective. As the Jewish and Christian Bible notes multiple times, there is no person who really does good. We are all guilty because we all have sinned and fallen short of the Glory that is God’s.

Although all the children in the movie appear to come from Muslim immigrant families from Northern Africa, the children otherwise don’t seem particularly Islamic. In the one scene mentioned above, the small group of children seem to listen patiently to the three Muslim elders who instruct them, but they go their own way the rest of the day, much like the average unruly child. That said, the Muslim Brotherhood leader in the movie, Salah, is depicted as a positive figure, despite the weird Muslim spin he gives the policeman about the nature of a wild lion. Also, however, Issa and his band of Antifa-masked thugs do nothing to Salah, even though he’s the one who gave the police the memory card from the drone.