"A Crisis of Conscience" 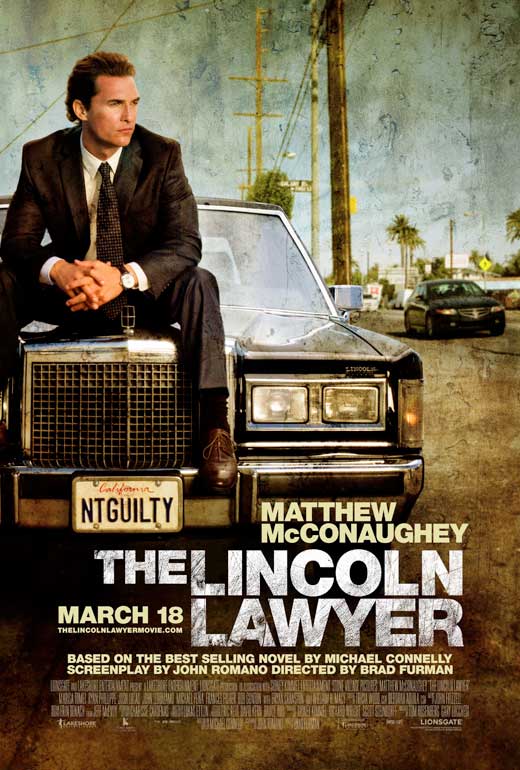 THE LINCOLN LAWYER stars Matthew McConaughey as Michael Haller, a wily defense attorney who conducts business with his Los Angeles clients from the back of his Lincoln Towncar. Haller is not above using some dirty tricks to ply his trade, including a little bribery to get his case moved up the court docket. When a high-profile client from Beverly Hills approaches Haller needing representation in a sexual assault and attempted murder charge, Haller sets his sights on a big payday and an easy plea-bargain. However, the client –a rich young man who frequents bars where prostitutes go – declares his innocence. Haller believes his client, but evidence later throws that into doubt. This puts the Lincoln Lawyer in a dangerous lose-lose situation. Haller must finesse this predicament, before his entire life comes crashing down.

THE LINCOLN LAWYER is an riveting courtroom drama with multiple twists and an Oscar-worthy performance by McConaughey. There’s only light redeeming content, however, when the wily Lincoln Lawyer experiences a crisis of conscience. THE LINCOLN LAWYER also has much foul language, some lewd adult content, strong violence, and unethical behavior by the hero until he finds his way.

(PaPa, B, Ho, C, LLL, VV, SS, N, AA, DD, MM) Strong mixed pagan worldview with pagan elements regarding an ethically challenged hero, some light moral elements when hero eventually does the right thing, brief mention of alleged homosexual couple by calling them a derogatory name (which other characters frown upon), plus some light redemptive content such as one character says “by the grace of God,” protagonist says his greatest fear has become a fear of evil and protagonist fights for a former client he knows was wrongfully sent to prison; 47 obscenities and five or six profanities, including three or four strong ones; strong violence includes graphic images of woman with bruises and cuts on her face after being assaulted, flashback sequences depict assault against woman and includes punching, kicking and throwing through furniture, some strong courtroom dialogue throughout with regard to rape and assault and stabbing murder, partial photographic images of corpse with stab wounds on body, man tells a story about a murderer who decapitated his wife, images of bloody knife in an evidence photograph, man’s dead body is seen after shot in head with small pool of blood under head, bikers assault young man, man is shot in the belly, and he shoots the shooter self-defense; strong sexual content includes partially depicted sex between man and his ex-wife kissing and groping in bed, flashback sequences show men in a brothel dancing with scantily clad prostitutes, man is solicited by prostitute, strong dialogue throughout the movie regarding prostitution, and implied sexual assault, including brief verbal descriptions of female body part; no explicit sexual nudity but prostitutes are seen in brothel wearing lingerie, female cleavage, upper male nudity, and woman in bra and underwear shown; strong alcohol use depicted throughout and drunkenness depicted in two or three scenes; cigarette smoking and several conversations about marijuana, cocaine use and people being arrested for drug use and drug possession; and, lying, moral relativism, lawyer takes financial kickbacks under the table, bribery, blackmail, perjury, threats, breaking and entering, vandalism, and defense lawyer defends people he knows are guilty of crimes.

Michael Connelly is one of the premiere mystery writers in the United States. THE LINCOLN LAWYER, based on his best-selling book, is a slick, thrilling crime drama about a charming criminal defense attorney who takes an easy, high-profile case to get a big payoff, only to find himself caught in an intricate web of murder and blackmail.

THE LINCOLN LAWYER stars Matthew McConaughey as Michael Haller, a smart, wily defense attorney who conducts business with his Los Angeles clients from the back of his Lincoln Towncar. Most of his clients are run-of-the-mill, petty criminals nabbed for petty theft, light drug trafficking and the occasional assault charge. So, when a high-profile client from Beverly Hills approaches Haller needing representation in a sexual assault and attempted murder charge, Haller sets his sights on a big payday and an easy plea-bargain.

Haller’s client, Louis Roulet (played Ryan Phillippe) insists on his innocence and tells Haller he will not accept a plea bargain for a crime he did not commit. Now, Haller must step out of the back of his Towncar and into the courtroom. However, as the facts of the case are revealed, Haller finds himself caught between a client he thinks may be guilty of rape and murder, evidence that may exonerate one of his former clients who is wrongfully locked away in prison, and a police investigation that looks to frame Haller for the murder of one of his closest friends.

As tensions rise and crisis builds, Haller’s client leverages threats and blackmail against him. This puts the Lincoln Lawyer in a lose-lose situation. Haller must find a way out of this predicament, before his entire life comes crashing down around him.

THE LINCOLN LAWYER is an exciting, thrilling movie with multiple twists and turns that lead to an exciting conclusion. The movie deftly captures the mutli-layered plots of the novel and weaves them together in a concise and riveting movie. Matthew McConaughey is perfect for the role of Haller. He possesses both charm and intensity as his character unravels throughout the film. The supporting cast is excellent as well, boasting impressive names and even more impressive performances.

The movie does, however, contain much cautionary content, which media-wise viewers will want to be aware. For example, the movie has some strong violent and sexual content, themes and dialogue. There is also a copious amount of strong foul language. The mixed pagan worldview does not contain a lot in the way of redeeming content, but Haller’s character does experience a crisis of conscience in defending people he knows are violent criminals. His biggest fear used to be how do you recognize when a client is truly innocent, but it becomes: What do you do in the face of true evil? Eventually Haller does the right thing, even though he’s an ethically challenged lawyer who’s not above using almost every dirty trick in the book, while he is making a lot of money doing it.

The plot to THE LINCOLN LAWYER also involves some violent themes. There are some flashbacks showing violence against women and implied sexual assault, as well as some graphic discussion about rape, murder, brutal assault, and prostitution.

All in all, THE LINCOLN LAWYER is a very well made movie, but even adult viewers will want to exercise extreme caution when deciding whether to see this movie. One of our reviewers who had read the book noted that the movie version seems to have even more foul language than the book, including some strong profanities. A quick look at the book reveals that probably is true, though the book does make use of the “f” word. Please consult our CONTENT section for all the basic elements in THE LINCOLN LAWYER.