"Too Many Limp Storylines and Too Much Liberal Lunacy" 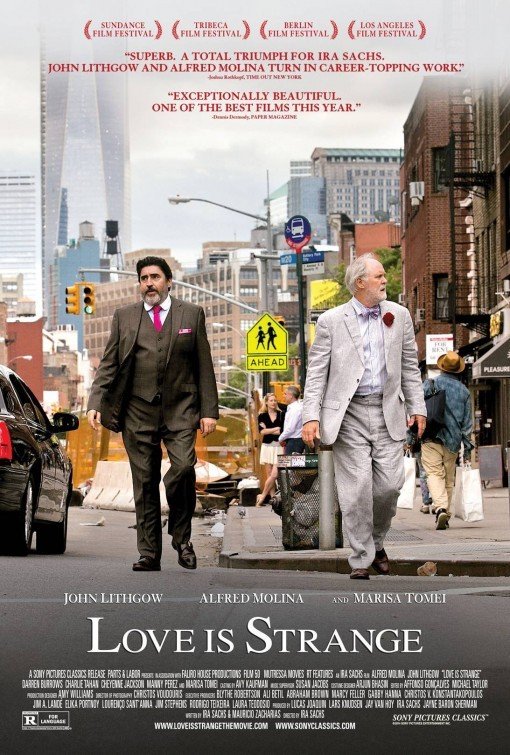 LOVE IS STRANGE opens with two older homosexual men, George and Ben, tying the knot after 39 years together. The “marriage” forces the Catholic school for which George works as a music teacher to fire him. So, Ben and George have to sell their nice apartment and temporarily live apart as they search for another one. Ben moves in with his nephew and his nephew’s wife and teenage son. Meanwhile, George settles with two younger homosexual men who also are police officers. The new living arrangements turn out to be a burden on everyone.

The problem with LOVE IS STRANGE is that the family relationships are more interesting and dynamic than the movie’s depiction of homosexual relationships. In fact, the growing pains the great nephew undergoes are perhaps the movie’s most interesting, touching part. LOVE IS STRANGE also has a Romantic, liberal worldview. It not only has a pro-homosexual perspective but also wants to support more money for social welfare programs. Ultimately, LOVE IS STRANGE is a disappointing drama with an abhorrent, confused, leftist perspective. It’s politically correct, vacuous and immoral.

(RoRoRo, PCPCPC, HoHoHo, SoSo, C, B, FRFR, AbAb, LL, V, SS, NNN, A, D, MM) Very strong Romantic, liberal worldview with a very strong politically correct, pro-homosexual attitude that advocates for more money for socialist social welfare programs run by the government (without asking who pays for such programs), with a statement of Christian, biblical faith in one scene undercut, however, by false, Anti-Christian, anti-biblical elements in other scenes, including 1 Corinthians 13:6 is mistranslated to make a pro-homosexual point supporting such sin; 12 obscenities (including 10 “f” words and two “s” words) and one light profanity; crash is heard of man falling down stairs with a hospital scene afterwards; depicted homosexual kissing and hugging, and brief talk about past infidelity; fully nude drawings of a man and a woman hang on a wall, plus brief upper male nudity; alcohol use; smoking; and, resentment, father refuses to believe teenage son when son denies trying to steal some library books, father briefly accuses wife of coddling their teenage son, wife is upset husband works a lot, and Catholic school lets open homosexual be its music teacher but only fires him after he gets married to his partner in a public ceremony.

LOVE IS STRANGE is about a homosexual couple in New York City and their relationships with one of the men’s family. The movie focuses on the homosexual couple’s relationship, but it’s also about the relationships among all the family members. As such, it has a very strong Romantic, liberal worldview that also takes the time to make some statements supporting big government, social welfare programs. The movie’s not as dogmatic or didactic about these things as it could be, but it’s clearly a work of political propaganda that tries to provide some insights into personal and family relationships as well. As the Marxists are wont to say, however, the personal IS political. That’s why today’s leftists have become so annoying: they want to make every issue so politically charged that the government practically becomes completely totalitarian by default.

The movie opens with the homosexual couple, George and Ben, tying the knot after 39 years of being together. However, the “marriage” forces the Catholic school, for whom George works as a music teacher, to finally get rid of him. As a result, Ben and George have to sell their apartment and temporarily live apart as they search for another one. So, Ben moves in with his nephew, Elliott, and his nephew’s wife and teenage son, Kate and Joey. Meanwhile, George moves in with two younger homosexual men who also happen to be cops.

The new living arrangements turn out to be a burden on everyone. Ben, who’s a bit older than George, tends to be a rather talkative senior citizen, which grates on Kate’s nerves. Also, Ben’s great nephew, Joey, doesn’t enjoy having to share his bedroom with Uncle Ben. Meanwhile, George doesn’t really fit in with the two homosexual policemen’s younger lifestyle.

Making matters worse is that George and Ben are having trouble finding an apartment they can afford, even if Ben gets some financial help from New York’s complex, bureaucratic welfare programs. Also, Joey is having some growing pains, which causes some problems with his parents.

The problem with LOVE IS STRANGE is that the family relationships are more interesting and dynamic than the movie’s depiction of homosexual relationships or its leftist political slant on the inadequacies of the social welfare state America has created in New York. The homosexual relationships lack any real conflict, and the movie doesn’t spend enough time on its social welfare subplot. At one point, George writes a letter to the Catholic school’s board of directors complaining about his dismissal, but, other than that, the movie drops this storyline and its potential for creating some dramatic conflict. At another point, the movie implies that Ben cheated on George when they were younger, but this plot idea also just remains an afterthought, a piece of background information that does little for the movie’s eventual storylines or character arcs.

There is, however, a touching scene where Ben tells his great nephew, Joey, that, if he likes a girl, he should tell her, because life’s too short to let shyness stop him from making a friend. This scene is eventually followed up with lyrical shots of Joey and his new girlfriend skateboarding together on the streets of New York while the sun sets. In another touching scene, a family tragedy finally affects Joey, who’s trying to act tough and cool throughout the movie. The scene shows Joey finally giving into his tears while standing alone in a stairwell with his skateboard.

Frankly, these scenes show that the real story in this movie isn’t the homosexual relationship between the elderly uncle and his partner and their problems getting a new apartment. The real, and better, story is Joey’s coming of age and how his uncle affects that. Clearly, the filmmakers’ leftist politics and pro-homosexual agenda have gotten in the way of their filmmaking.

This problem is reflected in how the movie’s leftist filmmakers treat the Catholic Church and its stance on homosexual behavior and same-sex “marriage.” One scene shows that George clearly opposes the church’s stance, even though he claims in that scene that his Lord and Savior is still Jesus Christ. Of course, the movie never wonders why, if Jesus is really George’s savior and Catholicism is George’s preferred Christian sect, why he has renounced the Jesus Christ, the Bible and the Catholic Church’s clear teaching on these matters. A clue to this is revealed in another scene where George misquotes 1 Corinthians 13:6. In that passage, the Apostle Paul writes, “Love does not delight in evil but rejoices with the truth.” However, George misquotes it while defending homosexuality and same-sex marriage, saying, “Love does not delight in injustice but rejoices with the truth.” To distort a biblical passage to make a political point, or to excuse one’s personal, immoral behavior, is one of the most egregious moral, theological, political, and spiritual errors one can commit. It truly is evil. George’s distortion of the biblical text shows that leftists and pro-homosexual activists like the filmmakers behind LOVE IS STRANGE are not interested in moral or spiritual truth. Instead, they want to invent phony issues about “justice” and sexual politics to serve a vacuous intellect, a corrupt heart and a shallow imagination.