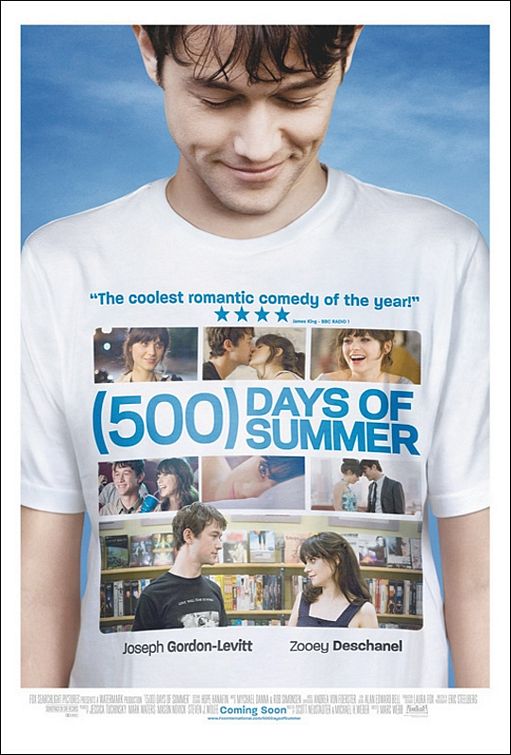 (500) DAYS OF SUMMER tells the charming and quirky, yet surprisingly realistic, story about a boy who meets a girl, falls in love, and experiences heartbreak and self-discovery when he finds out the girl doesn’t feel the same. The story begins with Tom, an idealistic would-be architect turned greeting card writer, who falls in love with Summer, his boss’s beautiful new secretary. From the moment they meet, Tom is smitten and over the course of their 500-day relationship, Tom experiences the high of being young and in love, the heartbreak of being dumped, and the journey of self-discovery.

(500) DAYS OF SUMMER has some commendable elements, including its high production values and its positive affirmations of marriage. The artsy directing, strong performances, intelligent dialogue, and the creative elements used such as split screens, time jumps, a song and dance number, and illustrations are delightful to watch. They all work together to make the plot unfold splendidly well. Even so, MOVIEGUIDE® advises extreme caution due to the movie’s strong Romantic worldview, New Age concept of Fate, foul language, alcohol use, and strong sexual references. Regrettably, the movie leaves God out of the picture.

(RoRo, Pa, Ho, B, LLL, V, SS, N, AA, M) Strong Romantic worldview where protagonist is emotionally driven and believes he will never truly be happy until he finds “the one” and his idealistic path to self-discovery and fulfillment of personal dreams is completely devoid of God, although one character serves as the voice of reason to his passion, plus New Age pagan element with main character believing in fate or some cosmic universal force controlling humanity, light homosexual material with character (who is not always portrayed in the most positive light as a bit of a desperate sleazebag) proposing a new holiday greeting card called “Other” Mother’s Day and same character asks girl if she’s a lesbian because she likes being single and independent, and some moral elements with two positive affirmations of marriage – one of these by a character who starts out being against marriage/serious relationships because of past hurts and ends up getting married; 25 obscenities and three profanities; character smashes a few plates and character punches man in a bar and gets punched in return; strong sexual content includes sexual depiction of two dogs, a couple of derogatory words (one said by a little girl) used in reference to a woman (i.e., skank), passionate kissing, three instances of implied fornication, character breaks out in a song and dance number to celebrate being young and in love and fornicating with his “girlfriend” the night before, couple enters the “adults only” section of a video store and rent a porn film to watch, some instances of a fully clothed couple laying on bed and talking, woman briefly discusses some of her past relationships which include one homosexual relationship and a relationship with a man nicknamed “puma” because of the size of his male genitalia, two characters see who can yell the word “penis” the loudest in a park; upper male nudity and woman’s upper bare back while laying in bed; characters drink beer at a bar and with dinner, drink shots at a bar and at a wedding, drink glasses of wine during a birthday party, man’s little sister gives him a shot of vodka, three instances where characters are drunk, and man buys strong alcohol from a convenience store; no smoking or drugs; and, one reference to Jesus having great “abs,” woman wants keep relationships casual because she says she doesn’t believe in love (her worldview is a result of the pain she experienced as a young girl when her parents divorced), but this is eventually resolved (though apart from God), and characters and story consistently affirm the New Age principle of Fate, with protagonist embarking on path of self-discovery within himself and completely devoid of God.

(500) DAYS OF SUMMER is a fantastically-directed charming and quirky, yet so realistic, movie about a boy who meets a girl, falls in love, and experiences heartbreak and self-discovery when he finds out the girl doesn’t feel the same. Although there are many commendable elements in regards to the production values and the movie’s affirmation of marriage, the experience is ultimately marred by a strong Romantic worldview, foul language, alcohol use, and sexual material.

This semi autobiographical story taken from the writers’ own experiences opens with Tom Hansen, an idealistic would-be architect turned greeting card writer, who believes he will never truly be happy until he finds “the one.” Tom sees the world as being controlled by a cosmic force that some could call Fate. However, Summer Finn, his boss’s new secretary and the focus of Tom’s deep affection, does not believe as he does. In fact, she doesn’t believe in love at all and calls it a fantasy, saying that “most marriages end in divorce anyway.” Her views are very much shaped by the hurt she experienced as a young girl during her parents’ divorce. She doesn’t want to get hurt in that way or make herself too vulnerable.

From the moment he meets her, Tom’s feelings for Summer continuously grow as he discovers the things they have in common (i.e., they both love The Smiths, a rock group), but she makes it very clear from the beginning that she is only looking for a casual relationship with no labels attached. Tom, believing that he has the power to break down her walls, thinks little of her assertion and decides to take his chances.

The movie shifts back and forth over the course of the 500 days of their relationship, from the blissful moments to the heartbreak, on-again and off-again, to the first few dates followed by no more dates, from Tom’s path to self-discovery and the question he must answer, is Summer really “the one” for him? As Tom struggles to make sense of love and heartbreak, he is forced to decide whether he truly believes that the love between two people is cosmically destined. The movie’s ending may surprise some viewers, but most will be pleasantly surprised as Tom begins a new season of his life, so to speak.

(500) DAYS OF SUMMER has some very commendable elements in regards to the production values, as well as the positive affirmations of marriage. The artsy directing is superb by first-time movie director Marc Webb. A compilation of split screens, dream sequences, time jumps, a song and dance number, narrators, a cartoon bird, illustrations, and other creative techniques are used to tell the story. It might seem like the movie could be over the top with this many creative elements added, but it actually works splendidly. The music is also delightful, and the acting worthy of recognition, especially for Joseph Gordon-Levitt. The dialogue between the two main characters is witty and intelligent (reminiscent of true-to-life experiences). Finally, although the plot may be simple, it unfolds well.

The positive affirmations of marriage arise when Tom and Summer attend the wedding of a co-worker and also when Summer herself, who was seemingly against it in the beginning, ends up getting married.

Despite these commendable elements, (500) DAYS OF SUMMER contains a fair amount of content requiring caution for viewers. One problematic element concerns Tom’s little sister, Rachel, who is probably about 11- to 13-years-old. At various times during the movie, she serves as his voice of reason and sometimes has good words of wisdom. For example, she encourages Tom to be more objective and to try examining his relationship with Summer from the perspective that she might not actually be the one for him. The problem occurs in a couple of instances where Rachel gives Tom a shot of vodka to help calm him down after his breakup and also where she uses a derogatory word to call him a wimp. Although these instances are played for laughs, they are unnecessary and out of place.

(500) DAYS OF SUMMER is very much dominated by a Romantic worldview, where the characters are young, idealistic and very much guided by their emotions apart from reason and apart from God. While audiences will root for the easily relatable character of Tom, the enduring meaning that can be taken away from the movie is lacking and somewhat hollow because it completely leaves God out of the picture. Although the movie ultimately extols marriage, it is only through Jesus Christ that we can truly discover our true identity and purpose as His children. As Genesis 1:27 says, “So God created man in his own image, in the image of God he created him; male and female he created them.” Also, in John 1:12, “Yet to all who received him, to those who believed in his name, he gave the right to become children of God.” And, as 1 Peter 2:9 states, “But you are a chosen people, a royal priesthood, a holy nation, a people belonging to God, that you may declare the praises of him who called you out of darkness into his wonderful light.” Lastly, Ephesians 1:4 says, “For he chose us in him before the creation of the world to be holy and blameless in his sight.”

MOVIEGUIDE® advises extreme caution for (500) DAYS OF SUMMER due to its strong Romantic worldview, New Age concept of Fate, strong sexual references, foul language, alcohol use, and neglect of God.