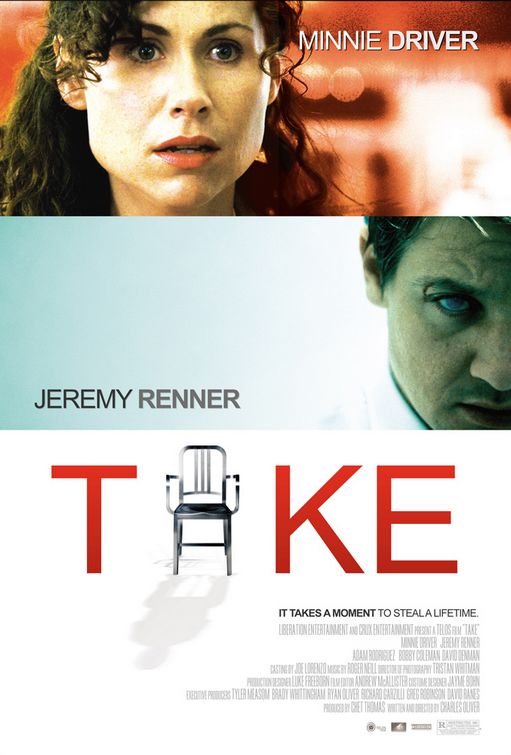 TAKE is the story of Ana, a woman driving to witness the execution of Saul, who had kidnapped and accidentally killed her son. Saul spends his last day in a conversation with a young prison chaplain about God. In flashbacks of their memories, viewers come to know both Ana and Saul when their paths crossed that fateful day. Desperate for money, Saul robs a supermarket and accidentally kills the clerk, taking Ana’s son hostage. The boy is killed as Saul drives off a bridge. Ana can’t flee the haunting memories of her son. As Saul dredges up his memories, he argues with the chaplain whether God can really love him and has a plan for his life. The chaplain answers his questions as best he can and reads Scripture, including Matthew 6 and Psalm 23.

The acting by Minnie Driver and Jeremy Renner is superb as they convey the heartache of their characters. The writing and direction are top notch. TAKE is a powerful film, both disturbing and gentle at the same time. It is a well-crafted, profound story of forgiveness, but the violence depicted make this a movie mostly for adults.

TAKE is the story of Ana, driving on a day trip to witness the execution of Saul who had kidnapped and accidentally killed her son. While she travels, Saul spends his last day in a conversation with a young prison chaplain about God. Ana pulls a small trailer filled with her son’s belongings that comes to represent the memories she cannot escape.

As Ana travels she “sees” her son in the backseat and other places, reminding her who what led to the fateful day of his death. Her son Jesse is a special needs kid. He and Ana are in a grocery store when Saul robs the store. Saul unintentionally kills a clerk and grabs Jesse as hostage until he can get away. Saul and Jesse end up in a car accident, which kills Jesse.

Meanwhile, Saul is in conversation with the prison chaplain who tries to convince Saul that God loves him. Saul resists, feeling guilty about his crime. A flashback reveals Saul’s story. Trying to take care of his ill father, Saul owes a gambling debt and must pay by the evening. He is given a gun by a friend and is hired to repossess (i.e., steal) a car to pay back a debt for his friend. It goes badly, and Saul fails to retrieve the car.

Still with the gun, Saul goes into a store to get medicine for his father. When he realizes that he still has the gun, in a moment of desperation, he holds up the clerk. The clerk fumbles for the money, and Saul panics, killing the clerk. He grabs Jesse and makes the escape that results in Jesse’s death.

As Saul dredges up these memories, he argues with the chaplain whether God can really love him and has a plan for his life. The chaplain tries to answer his questions as best he can and reads scripture, including Psalm 23 and passages from Matthew 6.

In an unplanned visit, Ana asks to talk alone with Saul. He expresses his sorrow for killing her son. Ana, who has lived for the moment of his execution, has a change of heart and says that she forgives him. She turns and leaves. Saul exhales a sigh of relief and looks to heaven.

Saul is executed, and Ana returns home having not needed to witness the event. She no longer lugs the trailer of memories and is now free from “seeing” her son everywhere she looks.

TAKE is a powerful, well-crafted story of forgiveness and repentance. While viewers may come to understand the actions of Saul, he is never painted as a victim. In fact, he always takes responsibility for his actions. Yet, without condoning his actions, the movie creates empathy for him. The filmmakers have been able to create very complex characters that ring true as they struggle with terrible loss, guilt and grace-filled forgiveness.

The acting by Minnie Driver and Jeremy Renner is superb as they convey the heartache of their lives. The writing is top notch. TAKE is a powerful film, both disturbing and gentle at the same time.

There are only two very mild examples of foul language and no nudity or sex. The violent content and a depiction of the lethal injection, however, make this a movie only for adults. The theme of forgiveness and redemption is powerfully crafted, though Jesus and the Gospel could be stressed more overtly. While the violence demands discernment, this is a well-made movie worth experiencing. The movie perhaps could be used as an evangelistic tool, as a way to introduce the Gospel of Jesus Christ, Christian theology and the Bible to non-Christian adults.