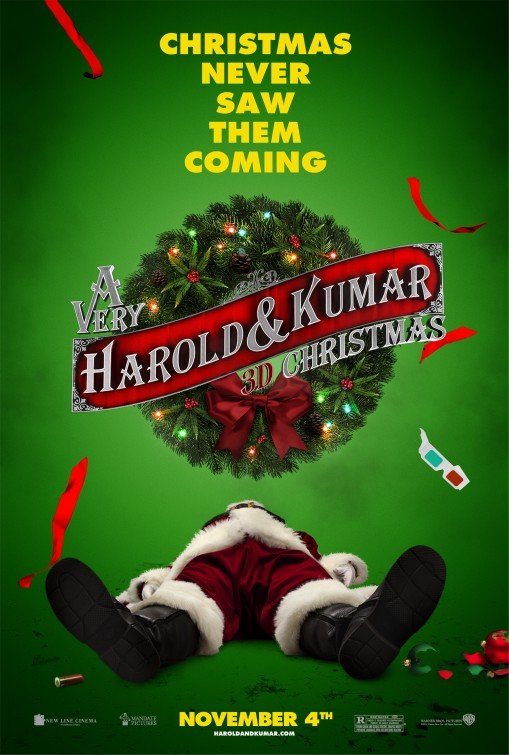 A VERY HAROLD & KUMAR 3D CHRISTMAS is an abhorrent, despicable comedy. Harold has matured. He’s become a stockbroker and married a woman from a large, devout Catholic family. Meanwhile, his Indian friend Kumar has remained drugged and irresponsible. Kumar finds a mysterious box addressed to Harold. When he goes to deliver it, he accidentally burns down Harold’s father-in-law’s beloved Christmas tree with an errant marijuana cigarette. Desperate to replace the tree before his wife’s family returns from Midnight Mass on Christmas Eve, Harold hatches a plan with another friend to pick up the last remaining large fir tree in New York City. This leads to an elaborate series of twists as they hatch one badly planned escapade after another.

A VERY HAROLD & KUMAR 3D CHRISTMAS has a very strong pagan worldview making light of drug use. The movie has very strong, irreverent Anti-Christian, Anti-Catholic humor mocking Jesus Christ and Catholic leaders. A VERY HAROLD & KUMAR 3D CHRISTMAS is also filled with other abhorrent, irreverent humor, foul language, lewd content, and nudity that’s extremely crude and offensive. It’s an insult to Christians this is being marketed as a “Christmas” movie.

(PaPaPa, AbAbAb, B, C, HoHo, LLL, VVV, SSS, NNN, AA, DDD, MM) Very strong, somewhat mixed pagan worldview mostly promoting marijuana but also very irresponsibly making light of other drug use, some content has very strong, irreverent Anti-Christian and Anti-Catholic humor such as man allegedly goes to Heaven where he’s surrounded by scantily man who fantasizes nuns kissing and showering together and man fantasizes priest going after a boy mixed with some light positive content and respect shown for one Catholic family’s celebration of Christmas and going to midnight mass and man makes a serious speech saying he’s grown to love Christmas too after marrying a Catholic wife, and a supporting character says he’s converted from Judaism to Christianity, plus some overt homosexual references played mostly for crude laughs; more than 150 obscenities and profanities, mostly variations of “f” and “s” words with about 10 of God and Jesus Christ’s names being abused; strong comic violence includes a subplot involving Russian mobster and his henchmen where they’re shown slashing a man’s throat with blood pouring out and smashing a man’s hand with a hammer, henchmen open machine gun fire all over a party and causing dozens of teenagers to run for safety along with the lead characters, a comedic car chase where a driver plows through construction equipment and barriers before flipping car upside down and smashing the Christmas tree atop it, another tree catches fire, and Harold shoots a shotgun into the air and shoots down Santa Claus, who has a head wound that Kumar graphically performs impromptu surgery on; very strong, often disgusting sexual content and sexual humor includes one supporting character brags that he’s racing to “deflower” a woman he met on the Internet who is a virgin named Mary and then jokes, “How fitting is that?,” Kumar fantasizes Catholic nuns shower next to each other naked and even kiss each other while showering, several topless women wearing nun habits and at least one woman shown with full-frontal nudity including a cross shaved into her nether regions, Kumar fantasizes young altar boy teasing three Catholic priests who chase him towards “secret room,” one sequence features real-life actor Neil Patrick Harris satirizing his real-life homosexual status where the actor plays himself in a Rockettes-style Christmas stage show and is shown lying to women cast members backstage, saying he’s homosexual so that they will feel they can trust him to be alone with them in his dressing room so that Harris (in character for the film) can try to touch a female cast member all around her lingerie en route to attempting sex with her, though the actress catches on and fights him off her; extreme nudity includes woman has a crucifix over her private parts, shots of a Claymation male organ, man pours hot coffee over Claymation organ stuck to metal pole, and upper female nudity; alcohol use and drunkenness; extreme drug humor includes smoking marijuana, the two leads are also drugged with an unknown substance laced into egg nog by a rude teenager and this leads to a Claymation sequence of their drug visions in which a giant evil snowman wreaks havoc across New York City, and a girl toddler gets high on marijuana smoke from Kumar, gets high on cocaine that falls on her after she sneezes, and gets high with her father when they mistake Ecstasy for candy; and, lying, tawdry joke about getting rid of one’s circumcision after becoming a Christian, and one lead character learns to be responsible and agrees to marry and be a father to his pregnant girlfriend’s baby, but she tells him not to stop smoking marijuana.

A VERY HAROLD & KUMAR 3D CHRISTMAS is an abhorrent “Christmas” comedy promoted with the line “Get real naughty.” It continues the misadventures of two friends who used to bond over their love of marijuana, but haven’t spoken to each other in two years.

Harold has matured, become a stockbroker and gotten married to a woman from a large and devout Catholic family, while Kumar has remained drugged and irresponsible. When Kumar finds a mysterious box addressed to Harold outside his door, he goes to deliver it to his former friend. While there, however, he accidentally burns down Harold’s father-in-law’s beloved 8-year-old Christmas tree with an errant, burning marijuana cigarette.

Desperate to replace the tree before his wife’s family returns from Midnight Mass on Christmas Eve, Harold hatches a plan with another friend to pick up the last remaining large fir tree in New York City, only to have that one destroyed as well through Kumar’s shenanigans. This leads to an elaborate series of twists as they hatch one badly planned escapade after another in order to get hold of another fir that will enable Harold to fool his family into thinking their beloved tree is still intact and in use. Along the way, there is frequent profanity, abuse of numerous drugs played for laughs, the endangerment of a toddler as she accidentally breathes in or ingests marijuana, cocaine and Ecstasy, and some very offensive imagery involving Catholic nuns and priests. There are also some innocent laughs to be had, mostly through an ample array of slapstick moments, car chases, funny shootouts, a musical number during a Rockettes-style show, and some funny scenes playing off racial stereotypes, misconceptions, and prejudices between races.

The movie sometimes respects Harold’s in-laws’ deep love of Christmas. In fact, their effect on him is shown positively, with Harold having a reconciliation with his father-in-law at the end. The problem is that no positive moments can come close to making up for the waves of vile content surrounding them, which includes attacks on Jesus from self-proclaimed homosexual actor Neil Patrick Harris.

For example, in addition to frequent crude language and situations, there’s a scene where Harris allegedly goes to heaven and encounters Jesus who has a drink and gets upset when Harris tries to make time with some scantily clad and bare-breasted women. There’s also a scene where Kumar fantasizes about nude Catholic nuns showering together and kissing. He also fantasizes about an altar boy teasing three Catholic priests who chase the boy. Finally, as in the previous movies, the third movie overtly promotes frequent marijuana use.

A VERY HAROLD & KUMAR 3D CHRISTMAS has a very strong pagan worldview making light of drug use. It’s filled with abhorrent irreverent humor, foul language, lewd content, and nudity that’s extremely crude and offensive. It’s an insult to Christians that this is being marketed as a “Christmas” movie.