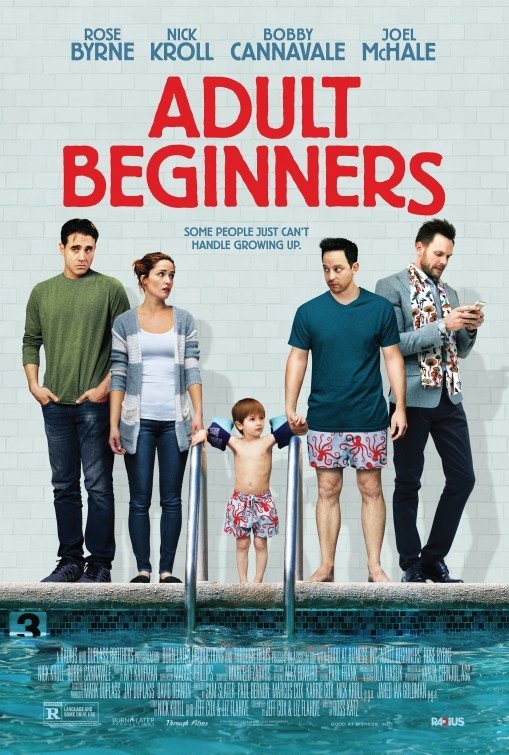 ADULT BEGINNERS follows Jake, an entrepreneur who upsets his friends and loses his own money in a project that falls apart. Jake decides to return to his childhood home in a small town. There, his sister Justine and brother-in-law Danny live in the house where Jake and Justine were raised. Jake guilt-trips the couple into letting him stay with them for three months, but they force him to care for their 3-year-old son Teddy. Jake uses this to start an affair with another nanny, but when that ends, Jake starts to like spending time with his nephew. This leads to Jake making some big changes in his selfish lifestyle.

This story has been told many times before, and ADULT BEGINNERS doesn’t find a particularly inspired way to handle the subject matter. There are some laughs and sweet moments scattered throughout the movie, but nothing compelling enough for most moviegoers. As the lead, Nick Kroll turns in a bland performance. The other cast members outshine him. ADULT BEGINNERS also has lots of foul language and some drug abuse, so extreme caution is advised.

(PaPa, B, C, LLL, S, N, A, DD, MM) Strong pagan worldview mitigated by light moral, redemptive elements as protagonist changes his selfish, narcissistic lifestyle after helping take care of his 3-year-old nephew; about 70 obscenities and profanities; no violence; implied fornication, two clothed people caught kissing in bathtub; upper male nudity; alcohol use; protagonist and best friend use cocaine in a couple scenes without consequences, and protagonist smokes marijuana with his brother-in-law behind the back of lead’s sister, who’s also the pregnant wife and mom from whom they’re hiding the smoking; and, strong miscellaneous immorality includes selfish behavior and lying throughout most of the movie by the protagonist, who does ultimately become a better person, but in a rather clichéd, boring fashion.

ADULT BEGINNERS is a comedy about a thirty-something entrepreneur who loses millions of his own money and the money of his friends on a failed invention and flees New York City to his small hometown, only to find that he’s made to be the nanny of the 3-year-old nephew of his pregnant sister and her husband. ADULT BEGINNERS has a strong pagan worldview with some mild moral, redemptive moments as the lead character matures into being a better person.

The movie follows Jake (Nick Kroll), an entrepreneur hoping to make his big splash using the investment dollars of his best friends, only to find out during the launch party that the project has fallen apart. Having upset everyone he knows and lost his own money to boot, he decides to return to his childhood home in a small town. There, his sister Justine (Rose Byrne) and brother-in-law Danny (Bobby Cannavale) live in the house where Jake and Justine were raised.

Jake guilt-trips the couple into letting him stay with them for three months, but they force him to be the nanny for their 3-year-old son Teddy. Jake is reluctant at first, until he finds he can use Teddy’s playdates with another child as an excuse to fornicate with the other child’s nanny. When that casual fling ends, however, Jake starts to really like spending time with his nephew and starts feeling a sense of responsibility about his life and not just being a spoiled narcissist. This leads to him making some big changes in his lifestyle.

This story has been told many times before, and ADULT BEGINNERS doesn’t find a particularly inspired way to handle the subject matter. There are some laughs and sweet moments scattered throughout the movie, but nothing compelling enough for most moviegoers.

As the lead, Nick Kroll is trying to break out of his relatively famous persona as the star of a Comedy Central sketch comedy series where he plays comically unlikable and obnoxious characters. He wants to be a normal human being who becomes a positive figure in this movie, but his performance is relatively bland. The rest of the cast outshines him, with Cannavale stealing the show for what seems the thousandth time in his career. Get Cannavale a quality starring role and let him become a comedic movie star instead.

All told, ADULT BEGINNERS tries to have a nice resolution, but it’s too bland along the way to be entertaining. It also has an unnecessarily high level of foul language and a too-casual attitude towards illegal drug use. While adult viewers can perhaps handle the movie with no serious moral qualms, they should consider whether it’s truly worth their time and money.