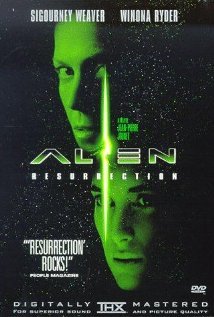 ALIEN combined science fiction with horror in a highly suspenseful thriller. The fourth movie in this feminist series, ALIEN RESURRECTION, trades in suspense and terror for gore and horror clichés. Two hundred years after Ripley’s death, scientists clone her, complete with a baby alien inside. Ripley is re-born as an adult, and the alien is extracted for medical research. A team of space pirates led by a foul-mouthed android, named Call, played by Winona Ryder, boards the vessel. The aliens escape their cages, people start to die, Call develops an emotional crisis, and the Queen alien mates with Ripley, producing a monstrous baby.

ALIEN RESURRECTION is ineffective as entertainment and has an immoral disregard for human life. We don’t care about the humans who get killed, because they are jerks. ALIEN RESURRECTION explores the dangers of genetic engineering, but better movies have been made about this theme, and this movie uses the experimentation as an excuse to display more gore. The theme of this movie is that in the future humans will become even more jaded, and the only thing that will demonstrate human emotions are robots. ALIEN RESURRECTION is anti-human, anti-life, anti-compassionate, and dismal indeed.

The groundbreaking movie ALIEN combined science fiction with horror in a minimalist, but highly suspenseful thriller. Its sequel ALIENS combined horror with the combat film (way before STARSHIP TROOPERS) to produce an in-your-face assault, unprecedented in science fiction. Both movies are considered landmark to the genre. The dull, mean-spirited and not even scary ALIEN 3 became a huge disappointment. After all, who cared if the aliens destroyed a penal colony in space? Nevertheless, ALIEN 3 introduced the idea of genetic recombination between alien and man when Ripley (Sigourney Weaver) became a host to a developing monster. (This was the start of a nihilistic dehumanizing attitude which lowered the value of humans to mere biological material. ) At the end of ALIEN 3, Ripley dove into some molten metal, killing both herself and the monster within her. A movie series that should have ended there is now carried on due to some preposterous logic leaps in ALIEN RESURRECTION.

Two hundred years after Ripley’s death, scientists aboard a spaceship take her blood and make a clone of her, complete with baby alien inside. Since her DNA is combined with the alien DNA, the presence of the alien inside her is possible. Ripley is re-born as an adult, with some transient memories of her former past and super-intelligent learning abilities, allowing her to re-learn her adult vocabulary. In contrast to the real Ripley, Ripley’s blood is acid, like the aliens. She has super-human strength, and she is good at basketball. Though Ripley is unimportant to the scientists, they keep her alive as a souvenir. The scientists really want to breed the aliens for medical research. Ripley warns them that the beasts can’t be contained and that they will die.

A team of vagabond space pirates led by foul-mouthed android Call (Winona Ryder) boards the research vessel when their ship becomes damaged. Covertly, Call has come to assassinate Ripley so that Ripley will not contaminate or carry the alien DNA to earth. In time, we get to see some of the grotesque creatures the scientists have created through various combinations of human and alien DNA. The aliens escape their cages, people start to die, Call develops an emotional crisis and can’t carry out her mission, and the Queen alien mates with Ripley, producing a frightening baby. A climax occurs when survivors attempt to jump ship but are pursued by more aliens and the Queen’s baby.

While not as awful as ALIEN 3, ALIEN RESURRECTION is ineffective as entertainment because it contains lots of illogical plot holes. The movie has an immoral disregard for human life. There are too many unconvincing explanations that try to justify Ripley’s existence in this movie. Winona Ryder is too sweet and demure to be effective as an action star. She is more convincing in costume dramas. Furthermore, her constant use of obscenities and profanities seems unnatural and jarring. Thirdly, the scientists are cold, heartless bio-engineers who only seek medical knowledge, even at the expense of creating life forms that they shouldn’t. Fourth, the pirates are mean, crude and unsympathetic. In short, we don’t really care about the humans who get killed, because they are all jerks.

ALIEN RESURRECTION also includes some stupid humor a la Arnold Schwarzenegger one-liners, but these aren’t funny. Other errors include an unexplained sexual union between two female creatures resulting in an offspring and a pseudo-religious occurrence where Call unplugs a modem line connected to an electronic Bible and plugs into herself. What was the meaning of the Bible? And, how does it relate symbolically to the people on the ship?

With the reality of genetic engineering and cloning available, a case could be made that ALIEN RESURRECTION is about the dangers of playing God. Indeed, the observed results of this quest are horrific, but better movies have been made about the dangers of “playing God,” and this movie uses its experimentation merely as an excuse to display more gore and carnage.

ALIEN RESURRECTION shows lots of blood, guts, limbs, slime, and more. The predominant theme of this movie is that in the future humans will become even more jaded and cynical than they are today and that the only thing that will demonstrate human emotions and tenderness are robots.

ALIEN RESURRECTION is anti-human, anti-life, anti-compassion, and dismal indeed. A future without God would be hopeless and void. Perhaps when the Bible is plugged into a machine, the director is making a brief point, but, by and large, this movie trades in suspense and terror for gore and standard horror clichés with many confusing elements. Yet, the movie seems to be in position to carry on further installments for more in the series.