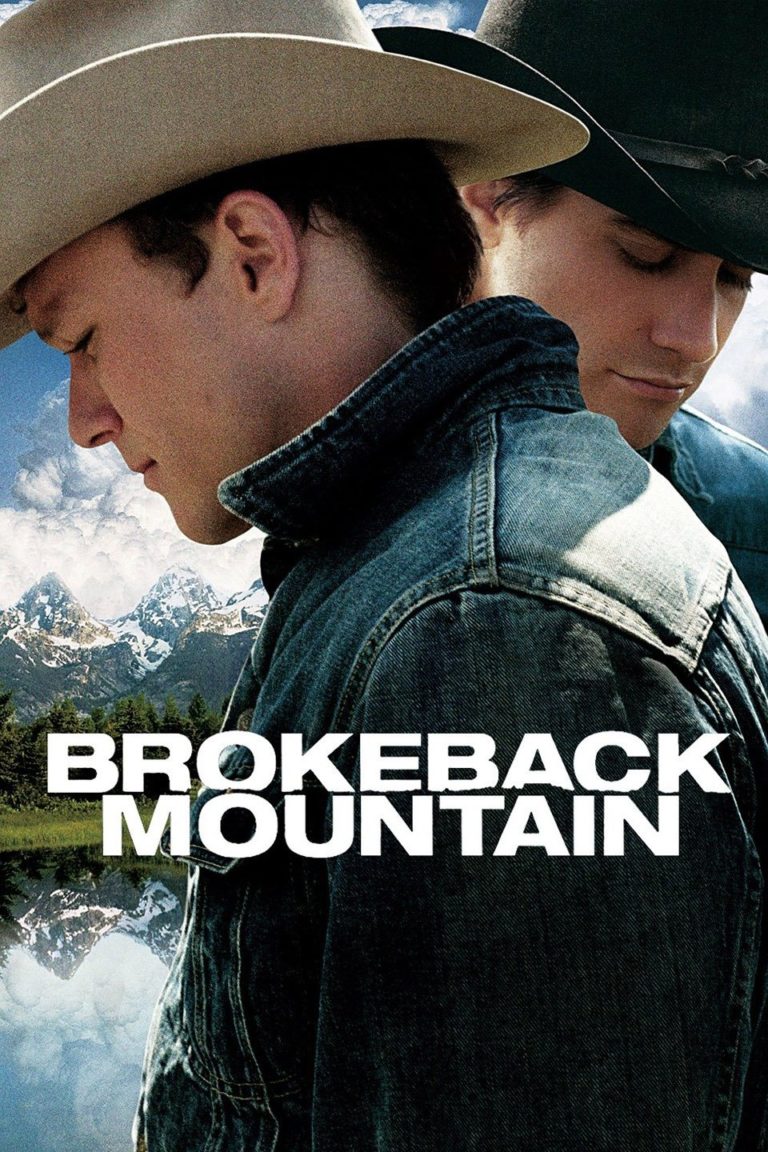 BROKEBACK MOUNTAIN, a homosexual cowboy movie, opens in Wyoming in 1963 where two young cowboys, Ennis and Jack, are hired to tend some sheep near the mountain. The two men become fast friends. One night, their friendship becomes an evening of lust, a scene that plays like a rape set in San Quentin Prison. For 20 years, the two men carry on a secret affair, despite the fact that they get married to women and have children. One of the wives finds out, but the other wife only suspects, until tragedy strikes.

Though well-photographed and often well-acted, BROKEBACK MOUNTAIN is too long and at times twisted, laughable, frustrating, sadomasochistic, plotless, and boring. It's also politically correct. The main conflict is between the two cowboys. Jack wants them both to get divorced and tend a ranch together, but Ennis is too afraid of the scandal their relationship would cause. Secretly, however, Ennis, is also haunted by the corpse of a murdered, castrated homosexual cowboy his father made him see when Ennis was very young. Thus, America and its sexual repression of homosexual perverts is the problem. Clearly, John Wayne is turning over in his grave.

(RoRoRo, PCPCPC, HoHoHo, Co, AcapAcap, Cap, Ab, AP, RHRH, C, LLL, VVV, SSS, NNN, AA, D, MMM)
Dominant Worldview and Other Worldview Content/Elements:
Romantic, politically correct worldview with very strong pro-homosexual content, including explicit sex scenes that sometimes come across as sadomasochistic, a pro-Marxist or pro-Communist subtext seems evident, with some strong anti-capitalist sentiments against one protagonist's employer, although that protagonist eventually proves to be a good salesman for his father-in-law's company, and an explicitly anti-Christian scene where one protagonist mocks people who go to church and who sing hymns about Jesus Christ and an anti-American subtext that seems evident, as well as revisionist history of homosexuality in America in order to serve the movie's politically correct, Romantic worldview about homosexuality and its sexual perversions, including a Christian wedding scene with the Lord's Prayer, but it has an ironic tone in context of the rest of the movie;
Foul Language:
About 58 obscenities (including ,many "f" words), 15 strong profanities, one light profanity, and references to urinating;
Violence:
Two extreme scenes of bloody violence include shot of castrated man and man's head is beaten bloody until he is dead, and scenes of violence where men fight and wrestle in a rough way, and homosexual sodomy scene plays almost like a homosexual rape;
Sex:
Very strong sexual content includes depicted homosexual and heterosexual sodomy (with a hint of sadomasochism during one or more homosexual scenes), depicted homosexual kissing and groping, depicted intercourse between married couple, and implied intercourse and almost intercourse with women who are shown topless;
Nudity:
Upper female nudity in several scenes, full male nudity in bathing scene, rare male nudity, and upper male nudity;
Alcohol Use:
Alcohol use and drunkenness;
Smoking and/or Drug Use and Abuse:
Smoking;
Miscellaneous Immorality:
Lying, men cheat on wives, sexual "repression" is seen as evil, family arguments, divorce, and negative portrayal of heterosexual fathers.

If he wasn’t in heaven, Dr. Ted Baehr’s father, 1930’s Box Office Award winning, Hollywood Cowboy star, Bob “Tex” Allen, and his more recognizable successors like John Wayne and Gene Autry, would be rolling over in their graves. Except for an occasional movie like SILVERADO, PALE RIDER or TOMBSTONE, Hollywood keeps trying its best to ruin the spirit of the western. And, they wonder why most of the westerns Hollywood has been making in the last 25 years don’t make much money!

BROKEBACK MOUNTAIN, a modern homosexual cowboy movie that tells the 20-year love affair between two men starting in 1963, is twisted, laughable, frustrating, plotless, and often boring. It’s also politically correct. Thus, it’s sure to reap many awards this year from the leftwing media throughout the world and the leftwing elites in Hollywood.

The movie opens in Wyoming in 1963 where two young cowboys, Ennis and Jack, are hired to tend some sheep near Brokeback Mountain. The two men become fast friends. One night, however, their friendship becomes an evening of lust and passion.

For 20 years, the two men carry on a secret affair, despite the fact that they get married to women and have children. One of the wives finds out, but the other one mostly only suspects, until tragedy strikes, and she finds out for certain.

BROKEBACK MOUNTAIN is well-acted, although Heath Ledger as Ennis sometimes sounds like Carl from SLING BLADE, the character that Billy Bob Thornton made famous. The problem is that the story is relatively plotless, and the pace is slow and choppy at times. The movie’s running time is also much too long. All of this makes for a boring, and sometimes laughable, though well-produced and well-photographed, travelogue.

The main conflict in this movie is between the two cowboys. Jack wants them both to get divorced and tend a ranch together, but Ennis is too afraid of the scandal their relationship would cause. Secretly, however, Ennis, is also haunted by the corpse of a murdered, castrated homosexual cowboy his father made him see when Ennis was very young. Of course, one of the two cowboys ends up being murdered too.

Thus, in the end, the ultimate goal of the filmmakers behind BROKEBACK MOUNTAIN is to send a politically correct message about how awful American society is in its treatment of homosexuals. To complement this evil message is a scene where Jack mocks people who go to church and who sing hymns about Jesus Christ.

The movie also presents a very negative stereotype of strong heterosexual fathers. In fact, the homosexual cowboy whose guilt prevents the two lovers from riding off into the sunset together is shown to be an apathetic father. Only the love of one of his daughters is able to free the man from his apathy and indifference toward her. Furthermore, the most admirable homosexual cowboy is shown to be the most affectionate father toward his child.

Of course, adding to this PC tone is plenty of strong foul language, explicit sex scenes and explicit nudity. Surprisingly, there also is a strong tone of sadomasochism to the homosexual relationship in the movie. These scenes probably are the most unintentionally laughable scenes in the entire movie. The movie suggests, however, that this is due to the sexual repression that American society allegedly brings against sodomites like the two homosexual cowboys. As we predicted above, there are sure to be many leftwing awards for this twisted, laughable, frustrating, plotless, and boring piece of homosexual, Neo-Marxist propaganda. If only the leftists, radical feminists and Communists would show the same compassion for the wives of homosexual perverts like these two characters, the world might be a better place. Don’t count on that happening any time soon, however.