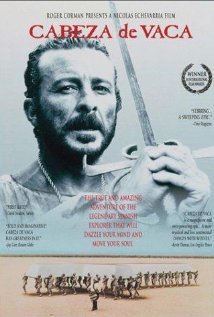 CABEZA DE VACA is a Mexican entry into the art house circuit, a favorite among critics who laud its "mysticism" and adventure. Actually, it is 90-odd minutes of tedium relieved only by brutal violence. Furthermore, the film depicts shamanistic rituals as supremely powerful, all Europeans as murderous brutes and Christianity as the motivating force for unbridled slavery. Political correctness strikes again.

(L, NN, VVV, Ab, NA) 4 obscenities; much upper female "National Geographic" nudity; one scene of full female nudity; multiple deaths by bow and arrow; close up view of extraction of arrow from chest and musket ball from abdomen; depiction of primitive shamanism as extremely powerful, both in causing and healing disease; raising of dead through shamanism; Christianity shown only as motivating brutal enslavement and killing of native Americans.

Hailed by many critics as covering mystical ground, CABEZA DE VACA portrays a Spanish Explorer, Cabeza de Vaca, being shipwrecked on the Southern Florida coast in 1536. Many of the expedition are massacred by hostile natives, but Cabeza de Vaca miraculously escapes only to be taken prisoner by the natives. Most of the film contrasts Christianity with shamanism, or the natives’ gods. Because Cabeza’s own God fails to free him, and he witnesses the success of the shaman’s powerful spells, rituals, chants, visions, and hallucinations, Cabeza gradually embraces shamanism.

CABEZA DE VACA is a Mexican DANCES WITH WOLVES in its mysticism and adventure. The film also depicts native cultures as beatific (or at least attractively sensual), environmentally conscious and spiritually powerful. However, it portrays European Christians as uniformly hostile, abusive and morally bankrupt. CABEZA DE VACA in its politically correct message, contains 90 minutes worth of tedium relieved only by brutal violence. Overall, the film depicts shamanistic rituals as supremely powerful, all Europeans as murderous brutes and Christianity as the motivating force for unbridled slavery.